Share All sharing options for: Vancouver Whitecaps Leave LA with a 0-0 Draw

The Vancouver Whitecaps traveled to LA to face the Galaxy Saturday night and while the better team on the night, left Carson City with only 1 point. Although the Whitecaps will be happy to have taken a point from the LA Galaxy, they missed a golden opportunity to move up in the standings, given the results earlier in the day that had both San Jose and Sporting Kansas City losing. 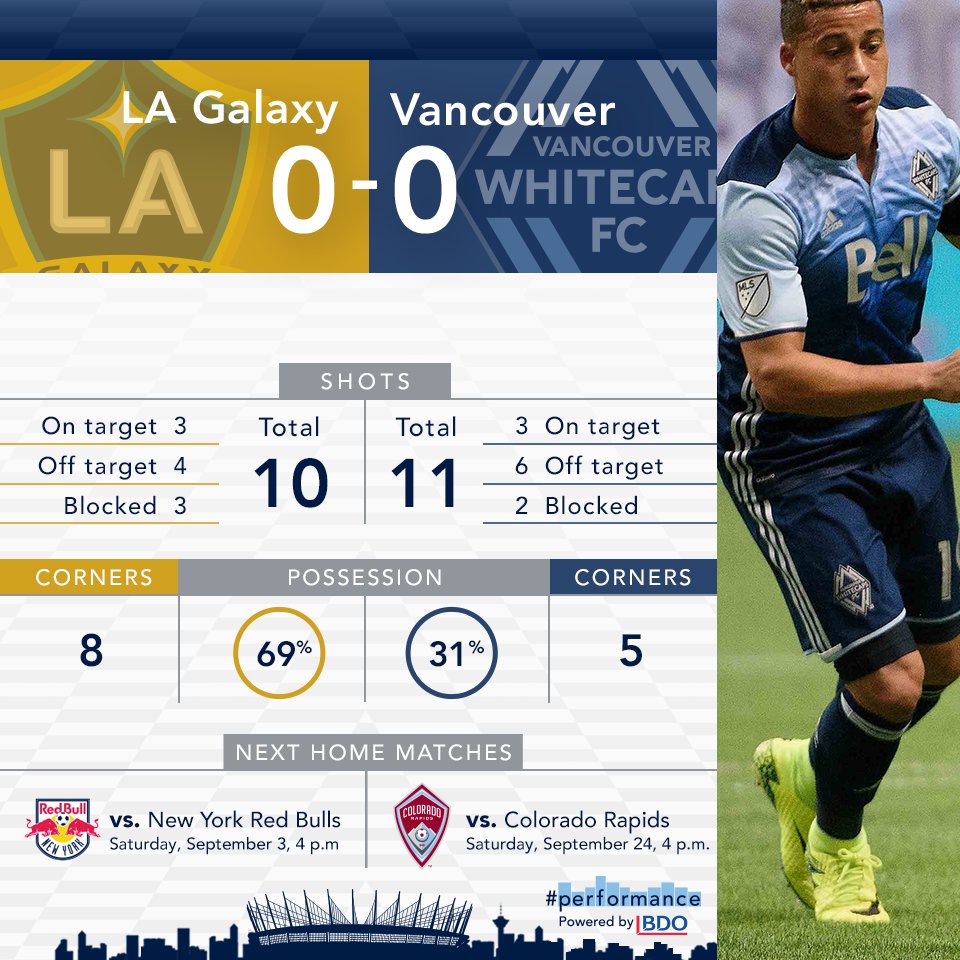 As is typically the case when playing the Galaxy, the match was full of plenty of surprises. Let's start with the Vancouver Whitecaps. Surprising, and not, at the same time, Carl Robinson decided to come back with most of the fringe starters that started on Tuesday night in the Caps victory. This meant that Russell Teibert and Eric Hurtado received starts, along with Jordan Smith and Fraser Aird (at right wing). However, who was left OUT of the lineup? Why, of course, the person who scored two goals Tuesday night, Cristian Techera. I joked on Twitter Tuesday night that Techera's goals meant that he was obviously going to be benched next game as Robinson HATES goal scorers. Apparently I wasn't that far off. I will let you discuss the decision in the comments below.

The LA Galaxy were ripe for defeat tonight as they had been winless in their last 5 (4 draws and 1 loss) including a draw in Chicago Wednesday evening, and then travel back to LA. In addition, Robbie Keane was sidelined, while Gyasi Zardes was a last minute scratch from the Starting XI. In the 31st minute, Steven Gerrard had to be substituted out for injury while LA's top defender Jelle Van Damme came out in the 44th minute. While Zardes was the substitute for Gerrard, by halftime, LA was without two of their best offensive threats and their best defender. In addition, the Whitecaps looked a lot more impressive in the first half than they had in...well, in a very long time. Hmm, maybe the odd lineup choices were actually good...then again...

On Tuesday night, Eric Hurtado scored his first goal in nearly two years. It was certainly a relief for Hurtado, who has played well this season but could not score a goal (a la Rivero). While I did not agree with this warranting a start in LA, that is what happened. However, true to Hurtado form, he missed a golden opportunity early in the match with his header bouncing off the grass, hitting the crossbar, and spinning away. It seemed like such a sure thing that even LA keeper Rowe gave up on the play, only to be surprised by the outcome. Call it bad luck or call it an inability to score a gift goal, Hurtado once again bungled it up and the Caps headed to the halftime break even.

The Whitecaps have had a tendency to look okay in the first half but then be run over by their opponent in the second half, unable to make the appropriate adjustments, while their opponent does. Saturday night was slightly different, but for a brief opportunity thanks to a great ball from Fraser Aird in to Pedro Morales, the Whitecaps did not seem to threaten; mind you, neither did the LA Galaxy.

While I was watching the match hoping that Carl Robinson would use his substitutes to inject some life and vigor into the lineup late and push for that very attainable winning goal, once again Robbo faulted in his decision-making; at least in part. Techera was the first substitution in the 66th minute, but came in for Aird, who appeared to be one of the better passing threats for the Caps on the evening. After Aird left, Techera was pretty much invisible the rest of the match. Maybe that is why Techera did not start? 14 minutes later, Mezquida was substituted in for Barnes. In my opinion, the better substitution would have been Hurtado, and then move Barnes up to striker. In typical Hurtado fashion, he had numerous chances throughout the match but was unable to bury one. In my opinion, it seemed like the better substitution involved keeping the more experienced striker (Barnes) on the field. And yet, in the most curious of decisions, Robbo almost failed to use his last substitution. With a minute of stoppage time left, Carl removed Pedro Morales and replaced him with Jacobson. While it was highly unlikely that the Caps were going to escape with a win, it was disappointing not to see Robinson use that last substitution earlier and offensively. LA did not seem to be anywhere near scoring on the evening. Yet, as has been his M.O., Carl played it safe and tried to leave with a point.

In the end, the Whitecaps will be happy to be leaving LA with a point, but as a fan I feel that it could have been so much more. The Galaxy have been of poor form lately and their lineup was a bit depleted to begin the match and quickly became more depleted as the match progressed. Yet, the Whitecaps were unable to capitalize and fell into the same patterns while it felt at times Carl Robinson did everything in his power to give the Whitecaps the LEAST opportunity for a victory. At no point did the decisions of Carl Robinson suggest that he was treating this match as a 'Cup Final' as has been the discussion all week (and after the match as well).

What are your thoughts on the match? Are you happy with the draw? What did you think about the starters? substitutions? Let us know in the comments.