In which we learned that sometimes a single signing can be all the difference in the world, and that Houston's brief turnaround was just that - brief.

Share All sharing options for: MLS Fantasy Roundup 2014 - Round 25

As little as a month ago, would any of us have picked the Montreal Impact to win another game this year? Saputo's boys looked more limp than l'Impact as they went on a seven-game losing streak of lackluster play that all but sealed their fate outside of the playoffs. (To be fair, there has been a worse losing streak: the New England Revolution's 8-game string of misery from May 31st to July 26th, inclusive.) Then Ignatio Piatti ($8.5m) happened and, wouldn't you know it, Montreal has won two of their last three, scoring five goals in the process. Piatti even earned himself a "Goal of the Week" nomination for his strike against the Columbus Crew. I wouldn't break out the champagne and start christening Montreal the new "it" team in fantasy, but I would nudge them a few more inches away from the quarantine zone. There might be some value picks as the season winds up, though, again, don't bet the farm on it.

Speaking of the Crew, they've just come into form after two abysmal stretches of play early in the season. Pity, then, that they now have to try and keep this momentum going without Giancarlo González. The Costa Rican fullback is now the property of Palermo, which is good news for the Crew's bank account and disastrous news for their on-field product. The Crew were flat-out horrible following their three-game winning streak to start the season, cracking off eight- and seven-game winless streaks buffered by a single win. Now, just as it would seem they've figured out how to tone down the ball-in-the-back-of-the-net stuff on their end while putting the ball in the back of the opponent's net for once (or twice, or thrice), they've lost a key piece of their squad. Abandon hope all ye who enter Crew Stadium, though it could be worse - they could be Toronto FC. Nelsen fired, injuries galore, Defoe nearly gone (and possibly still on his way out in December)... and yet somehow they're still in a playoff spot. I've said it before and I'll say it again: don't expect that to be the case come November.

Meanwhile, on the positive news ledger, we have a new entrant: the Houston Dynamo, who have upgraded from "depressing eight-game winless streak" to "inconsistent wins/losses". The catalysts have been threefold: one, Will Bruin ($7.7m), who is on pace for 142 points; two, a post-World Cup Brad Davis ($10.4m) who is looking every bit the dangerman of old; and three, DaMarcus Beasley ($8.2m), who World Cup watches and US Men's National Team followers should know very well. I say "positive" news because inconsistent form is better than horrible form and, as we've seen in years past, Dominic Kinnear teams simply do not stay horrible. Unfortunately for Dom and the Dynamo (which sounds like a great '70s punk band), all the positivity in the world can't stop the injury bug from striking. (All right, maybe "positive news" wasn't the best way to lead into this segment.) Beasley is nursing a hamstring injury, Bruin came off early in the Sporting Kansas City match and is listed as questionable with a "lower leg injury" and, the real back-breaker, Tally Hall ($5.5m) is done for the season with an ACL tear in his right knee from that same SKC match. It's a bleak picture for the Dynamo who will also be missing Kofi Sarkodie ($6.1m) for this week's match against Montreal due to suspension. One sliver of an upside for fantasy managers: backup Tyler Deric ($4.3m) is the heir presumptive during Hall's absence, meaning if you need cheap goalkeeper minutes, there's your answer.

Over in the grand prix that is the race to the Eighty Six Forever league's finish line, Richard Matthew's DamagedGoods still holds onto the pole position with a 39-point lead over 2nd place. Interestingly, it's not the usual suspects  - Eyes to the Evans and Have A Go Heroes - directly behind Richard. That honour goes to minisoccertime, who has been flying up the rankings and now sits at the penultimate spot of the leaderboard. Still, we can only honour one score as the best in the round at that honour goes, yet again, to Farmer Greensleeves of SuperSounderHawks FC: 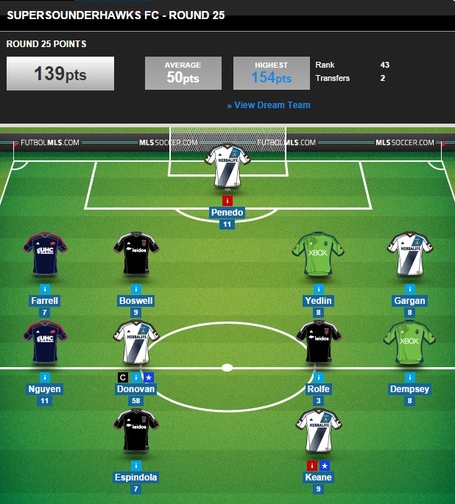 If you haven't yet figured out that owning LA Galaxy players is the easiest way to bank points, you're not paying attention. That said, 58 points for Landon Donovan ($11.6m) is obscene. Yowza.

For this coming round, there are no byes and five teams on DGWs: Philadelphia, Toronto, New England, Kansas City and Chivas USA. Here's the full breakdown: 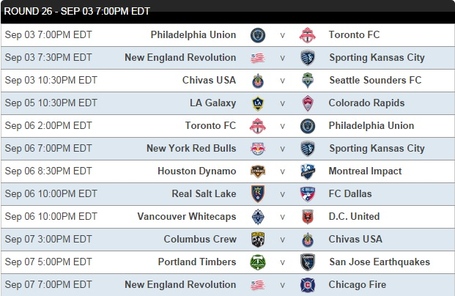 Bad Buys:
Who's your "go-to" player as the season enters its final stages? Which fantasy player can you simply not leave on the bench, no matter what? Let me known in the comments section below and I'll see you next week!