In which we learned to never doubt Bradley Wright-Phillips and that Montreal's sudden turnaround is in jeopardy.

Share All sharing options for: MLS Fantasy Roundup 2014 - Round 28

Three goals in five games - that's all New York Red Bulls striker Bradley Wright-Phillips ($8.9m) has to manage for a share of Major League Soccer history. Three more goals puts Wright-Phillips level with Chris Wondolowski ($9.6m) and "Rocket" Roy Lassiter on 27 goals. Based on BWP's performance and the support from those around him (namely some guy named Thierry Henry ($11.0m), you may have heard of him), I would put good money on Wright-Phillips adding his name to the history books. Now, the next question is, can BWP bank four goals in five game to own the record outright? Based on his body of work this season, the odds are good. BWP is currently sitting on a surreal scoring rate of 0.82 goals per game (24 in 29), better than what's needed to score four goals in five games (0.80). I know, I know - regression to the mean, regression to the mean, regression to the mean. And you know what? Sure. Wright-Phillips may very well regress. Even with that said, I still wouldn't put it past the man to score at least a pair of goals before the season is out. At his price and produciton, BWP had better be a fixture on your team to see out 2014.

Remember how wags like me left the Montreal Impact for dead once their stay in the Eastern Conference basement become more and more permanent? Well, they're still staying there, so don't go buying up Troy Perkins ($4.2m) hoping for a miracle. What's changed, though, is that Montreal is now capable of winning games with a mix of hot-headed youngsters and a very savvy vetern: Ignacio Piatti ($8.6m). Piatti transformed the Montreal attack into something actually worth respecting, contributing five goals and three assists in just under seven matches worth of playing time. This makes news of Piatti's knee tendonitis flaring up an absolute back-breaker for the upstart Impact. According to Olivier Tremblay's report, the Montreal staff will be managing Piatti's health and playing minutes very closely to ensure the midfielder doesn't prematurely end his soccer career. What this means for you, the fantasy manager, is that making an $8.6m investment on a will-he-or-won't-he is a dicey proposition. The only way having Piatti won't sink your fantasy squad is to keep an eagle eye on the fitness reports and roster line-ups. As soon as you have confirmation that Piatti is or isn't available, make your substitutions ASAP. Or, you could play it safe and sell him for someone in a similar price bracket who is producing - a Sebastien Le Toux ($8.2m) type, for example.

Our first shout-out to a member of the Eighty Six Forever MLS Fantasy Manager league is for a manager who technically hasn't even joined the league yet:

See, folks? It's never too late to join in and have some fun with the rest of us. Welcome to the league, Jude Jose!

Our second, more traditional mention goes to the best score of the round. The Round 28 top dog is Christy Guenther of Rio FC, the only team in our league that broke the 100-point barrier. Here's how Christy did it: 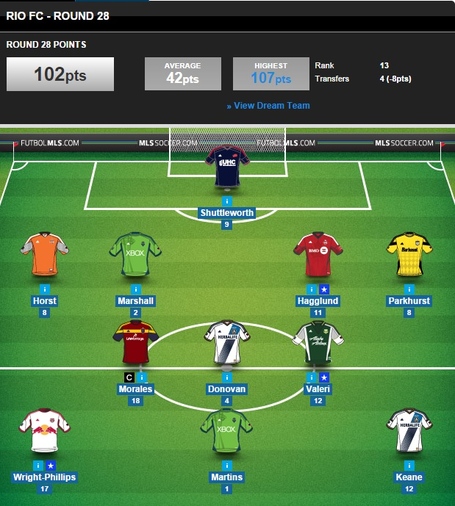 I'll be the first to admit I did not see Nick Hagglund ($5.3m), a fantasy bench player if ever there was one, bagging 11 points. Christy did, though, and combined Hagglund with solid performances from the rest of the backline, BWP's hat trick and a savvy choice to captain Javier Morales ($10.9m) - or, as we call him around here, "the other Morales" - to get a score placing Rio FC in the top 20 of the entire game. Well done, Christy!

Only one team has a double-game week in Round 29: the Seattle Sounders. Given their form, I think you know what this means. Here's the rest of the schedule: 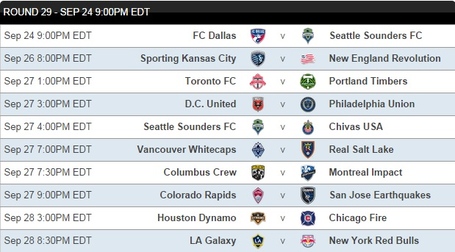 Keep an eye on those player prices as prices fluxuate; a quick sale for a profit could give you that little oomph you need to swing a big trade before the season is over. Best of luck to all of you out there and I'll see you next week!