In which we learned that I am capable of predicting the world of MLS Fantasy Manager startlingly well and that goalkeepers are a funny bunch.

Share All sharing options for: MLS Fantasy Roundup 2014 - Round 27

Well, how about that? Landon Donovan ($12.0m) finally had an off-week by fantasy standards thanks to a yellow-card-accumulation-forced break. Remember when I was all, "he can’t possibly keep this form going" and then it turned out I was right? Booyeah. Now, if only I’d listened to my advice instead of hedging my bets and picking up Landycakes anyway… hrmph. Oh well - in picking up Donovan, I dropped Fabian Espindola ($8.5m) on a hunch that DC might likewise be headed for a dip and, lo and behold, Espindola was sent off for a red card. Yeesh, why couldn’t I have hit my fantasy guru streak earlier in the season instead of well after my chance to earn a respectable finish? Double hrmph. Other correct predictions: FC Dallas over Vancouver Whitecaps 2-1, Chris Wondolowski ($9.6m) to score a goal and Sporting Kansas City to bump their slump with a win over Chivas USA. Attention all media outlets: I am still available for pundit duty. Relevant skills include predictions, bafflegab, time-wasting, space-filling and spewing enough faux-rage-induced hot air to melt the polar ice caps by next Tuesday.

Right, enough patting myself on the back; there’s a fantasy manager game to analyze and boy howdy, could the game be in for a change should Bradley Wright-Phillips ($8.9m) be out for any length of time. Sure, his famous partner on the New York Red Bulls has about as much to do with BWP's success as the man himself but when you're staring at the potential loss of your top scorer (and a Golden Boot contender at that), there's going to be a ripple effect. I'm sticking to my guns and keeping BWP in hopes he'll show up; I wouldn't begrudge any of the 26.4% of fantasy managers who currently own BWP for dropping him, though. New York's schedule until the end of the season: Seattle, LA, Houston, Toronto, Columbus, Sporting KC. So long as you have BWP for the Toronto match, you should be just fine.

Elsewhere in the league, you're probably aware that the best goalkeeper in fantasy right now is D.C. United's Bill Hamid ($5.5m) owing in no small part to the team's fantastic season. What you may not be aware of is that tied with Hamid on points is San Jose's Jon Busch ($5.7m). Now, considering San Jose's position in the league in 2014 (can we officially call 2012 a fluke now?), that's more than a little surprising. Perhaps because of this, Busch is only owned by 5.7% of fantasy managers compared to Hamid's 10.5%. If you need a goalkeeper to help boost your ranking without riding the coattails of everyone else in your league, Busch might be the guy.

Round 27's winner of the "Best Score Of The Round Bragging Rights" Sweepstakes is none other than Derrick Freedman, manager of Rino's Vancouver SC and holder of an even bigger bragging right this week - his 121 points was the second-best score in the entire game. Here's how he did it: 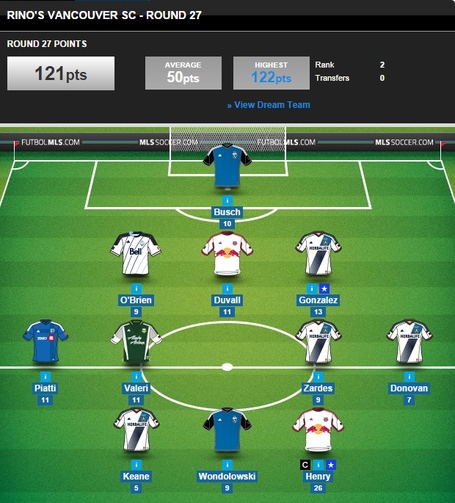 Derrick wasn't caught in the mire of people who played and/or captained Landycakes this round. Instead, Derrick made his mark with the other big-ticket item in MLS Fantasy Manager: Thierry Henry ($11.0m). Not a bad decision, considering how dominant the Henry-BWP connection has been this season - right up there with Oba/Deuce on the "Duos You Don't Want To Mess With" list.

Round 28 has no DGWs, so take all the time you want to hem and haw over those transfers. Choose wisely - as the remaining games tick down, every single point is vital. If it helps your decision-making, the Seattle Sounder have a DGW in Round 29 and Sporting KC are on a bye in this round. Here's the full schedule for this week: 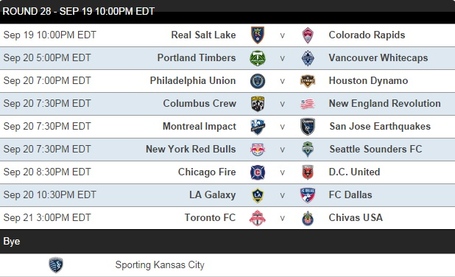 As always, leave your comments, suggestions, stories of valour, tales of woe and generous back-patting down below and I’ll see you next week!