In which we learned Landon Donovan is doing his best George Costanza impression by going out on a high note and I, for once, may have nailed a tough prediction.

Share All sharing options for: MLS Fantasy Roundup 2014 - Round 26

Any stat nerd will tell you that regression to the mean is inevitable. I tend to agree with them since they're stat nerds and I'm not. Then I see the ungodly form Landon Donovan ($11.9m) has been on as his retirement parade continues and I start questioning the very foundations of probability and statistics. Since July 28th, Donovan's lowest points total has been 4 - a number he hit twice in consecutive weeks (Rounds 22 & 23). The point totals outside of those low rounds? 15, 11, 13+11 (DGW), 15+14 (DGW) and 22(?!). His average points-per-match in that time frame is a sizzling 12.1; his points-per-round average is a beastly 15.57. I mean, that's just not sustainable. And yet... here's Landycakes coming into a another double-game round - LA's last of the season - against the Montreal Impact and the San Jose Earthquakes. Considering the defensive woes of both of those teams (San Jose's recent acquisition of Pablo Pintos ($6.5m) notwithstanding), would you really bet against Donovan to put at least one more round of fantasy gold on the table? Heck, I even took a four-point penalty to rejig my roster slightly to get Donovan on the team. My hope is to get at least a few points off the retiring Galaxy star to try and mitigate the beating I've taken at the hands of opposing fantasy coaches who have captained Donovan and reaped the generous rewards. It might only be a one- or two-round rental but that's still enough of a reason for me to pull the trigger and get a few Landypoints. Knowing my luck, though, this will of course be the round Fabian Espindola ($8.6m) gets a hat-trick.

I mentioned San Jose earlier; say, did you know they stink right now? No wins in six games, 16 goals shipped (avg. 2.66/game), eight points back of the Portland Timbers for the last playoff spot in the west and only three points ahead of Chivas USA for the conference wooden spoon. In short: that's bad. There is one positive, though: in those six winless games, San Jose were shut out only once. They're still scoring goals; conceding goals is the issue. Considering that, it's amazing that Chris Wondolowksi ($9.5m) is actually performing close to his price tag, only being completely shut out once in the last 10 matches and scoring at least six points in seven of the last eight. If San Jose suddenly figures out their defense and Wondo can keep that kind of form going, San Jose may be a sleeper fantasy pick going down the stretch.

A quick pat on the back for me (good job, me!) as my prediction of Toronto FC not making the playoffs has, for the moment, come true. TFC sits in 7th in the east, three points out of a playoff spot and - most crucially - a point behind the Vancouver Whitecaps for the right to enter CONCACAF Champions League due to the Voyageurs Cup schedule being reconfigured. In case you hadn't notice, TFC's defense is in shambles, "bloody big deal" Jermain Defoe ($11.2m) is out for another 1-4 weeks and Michael Bradley ($9.7m) is finding he lacks the surface area to put an entire team of pylons on his back. While most cynical Canadian soccer fans could (and probably did) tell you this was inevitable for TFC given their history, those same fans probably did not predict Sporting Kansas City would be next to tumble. Sure, the Sporks are still in second in the east with eight points separating them from 6th-place New York Red Bulls, but the defending MLS Cup champs are riding an uncharacteristic four-game losing streak. It probably won't cause them to miss the playoffs - probably - but keep your eyes on SKC closely over the next two weeks to see if you need to start jettisoning players.

And now, to the tune of the Flintsones theme song, a quick ode to the best manager in the Eighty Six Forever MLS Fantasy League:

Dave Hall / his name's Dave Hall /
He's been promoted to page one /
How did / Davey do it?
He brought in points by the ton!
(Laba-daba-dooooooooo!!!!) 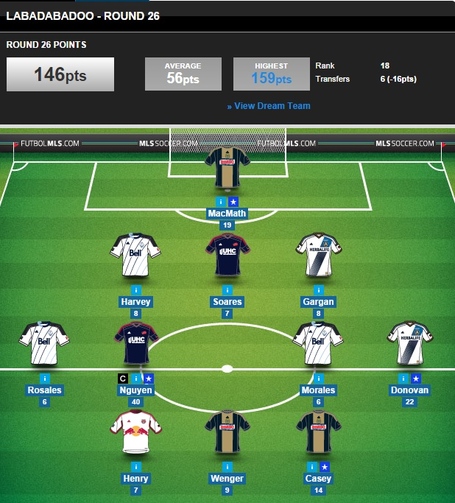 While the 0-0 draw with D.C. United was not the best for the real-world Whitecaps, their fantasy counterparts enjoyed the clean sheet bonus immensely. Also, that Lee Nguyen ($8.8m) dude seems to be pretty decent.

Lookee lookee, more tantalizing DGWs! Montreal, LA, NYRB, Vancouver and San Jose all get the double-game bump in this round and you have to generally like all their odds on the offensive side of the ledger if not the defensive side. (Yes, 'Caps fans, I know - this is why I said "generally".) 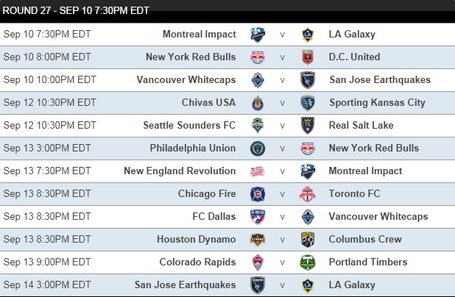 Which team are you least confident in as the playoff push reaches its end? Is there a player on your roster (or other people's rosters) that leaves a bad taste in your mouth? Share your horror stories below and we'll see you next week!