In which New England makes a mockery of my quarantine zone and the Galaxy are prepped to make a mockery of the Western Conference.

Share All sharing options for: MLS Fantasy Roundup 2014 - Round 21

I'm starting to think I might have some sort of "reverse Colbert bump" superpower based on how hard I condemn a team in my weekly fantasy round-up. Case in point: the New England Revolution, whom I placed squarely in my quarantine zone based on their atrocious form. I quote:

The New England Revolution remain in quarantine. Do not pick them for your DGWs. Do not stash Patrick Mullins on your bench thinking he might heat up again. Do not stare wistfully at Lee Nguyen and try to force his point totals up through sheer will. Avoid, avoid, avoid.

While I was right about Patrick Mullins ($5.0m), I was dead wrong about Lee Nguyen ($8.6m). The midfielder scored a brace in a 3-0 rout of Colorado and finished the round with a whopping 19 points. That's enough to make anyone think about picking Nguyen up but I would exercise a healthy amount of caution. Rather than a sign that the Revs have finally turned the corner, I would be more inclined to look at it as a sign that the Colorado Rapids are taking a turn for the worse. As evidence, I point to Colorado's subsequent 1-0 loss to Real Salt Lake at home and New England's choke against ten-man New York Red Bulls, giving up a 1-0 lead to lose 2-1. So, yes, I was wrong... for one round. I'm still not sold on New England long term and besides, they have a bye this week so you'd be well served to ditch 'em regardless of their Round 21 prowess.

While the other double-game teams had generally bipolar results - D.C. United stomping Toronto FC before being shut down by the new-look Houston Dynamo, New York unconvincingly drawing RSL before staging their great comeback against the Revs - the Chicago Fire had worryingly average results. Two draws (0-0 vs. Vancouver, 1-1 vs. Columbus) have all but banished the Fire from my fantasy must-have lists. Not even the cheap attacking duo of Harrison Shipp ($6.9m) and Quincy Amarikwa ($6.2m) are performing anywhere near where they should, which is a great shame for bargain hunters. The only glimmer of hope on the horizon is Round 23, where the Fire get a home date with the hapless (in MLS, at least) Montreal Impact.

Meanwhile, how 'bout that LA Galaxy? Four wins in their last five games, a 6-1-3 record in their last ten games... the sleeping giant has awoken and it's out for blood. In their 3-1 victory over the Portland Timbers, the Galaxy had goals from from Robbie Keane ($11.3m) and Gyasi Zardes ($7.0m), and assists from Landon Donovan ($10.8m), converted fullback Robbie Rogers ($6.2m) and Zardes. In short, the people you'd expect to perform are performing with help from role players. There's no real bad buy among the starting XI for the Galaxy, which is great if you're a fantasy manager and horrible if you're an opposing team. Incidentally, LA plays four matches in the next three rounds against San Jose, Columbus, Colorado and Vancouver. I can already taste the fantasy points.

Someone else has been tasting fantasy points for a few days, too. That would be Farmer Greensleeves, whose SuperSounderHawks FC took full advantage of last round's DGWs to clock a blistering 112 points, tops in the Eighty Six Forever fantasy league and only ten points away from the best score in the whole game. Here's how the good farmer did it: 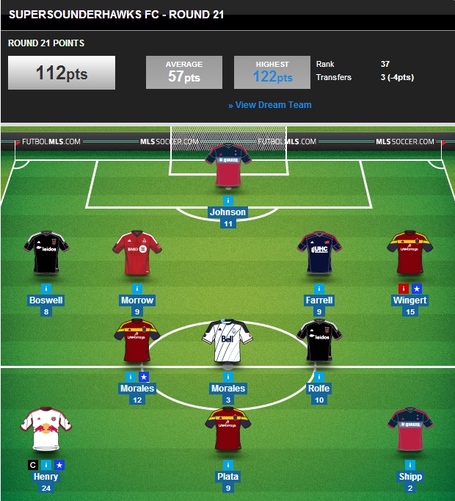 A good captain is always a good start and Farmer chose wisely with Thierry Henry ($10.7m). On the back of that, Farmer added clean sheets from his entire DGW backline, a solid outing from his midfield and a goal from Joao Plata ($7.7m) who didn't even play in the second game of the week. This is what we call an effective exploiting of the double-game week; well done, Farmer!

Sadly, there are no double-game weeks to exploit in this round owing to tonight's MLS All-Star Game. As mentioned earlier, the New England Revolution have a bye week. Here's the full schedule: 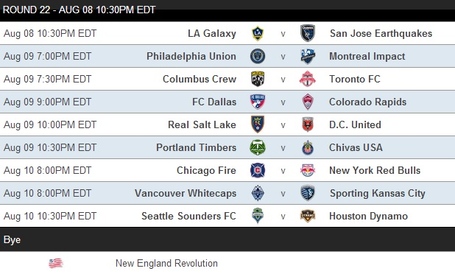 Enjoy the All-Star game, everyone! Alternatively, if you're not a fan of the spectacle, enjoy bashing the league for hosting a meaningless friendly in the middle of the season, everyone! See you next week for another fantasy round-up.