In which we learned Philadelphia is the rising power in the east and Los Angeles is the sexiest fantasy team on the planet right now.

Share All sharing options for: MLS Fantasy Roundup 2014 - Round 24

Vancouver faithful should know all about Sebastien Le Toux ($8.2m). The Frenchman made an immediate impact when he debuted in Vancouver on March 10th, 2012, scoring the opening goal in a 2-0 home win against the also-debuting Montreal Impact. Now back with the Philadelphia Union for a second stint, Le Toux is up to his old tricks with 11 goals and five assists in 22 games played this season. This takes Le Toux's MLS career totals to 45 goals and 42 assists in 177 matches.

In other words, Seba's money, y'all. In MLS Fantasy Manager, Le Toux has always been a good pick and he certainly showed it last round, getting a touch on all four of the Union's goals (1G, 3A) in a 4-2 win over the San Jose Earthquakes. On top of that, Philadelphia has lost once in their last seven games - a 2-0 loss to the Houston Dynamo, which also marked the first time the Union have been held scoreless since May 10th. Philly may be on a bye this week but they follow it up with a double-game week (DGW) against a Toronto FC sporting injuries to defenders Steven Caldwell ($6.7m) and Mark Bloom ($5.7m). Once again - Seba's money, y'all, and Philadelphia are poised to stake a serious claim to the playoffs.

Here's question: what do you do with a team that is in the playoffs, in fine form and has DGWs in Rounds 25 and 27? Answer: you fill your roster with them. The LA Galaxy are firing on all cylinders as the charge forward in their playoff bid, now seven points clear of the Whitecaps and only two back of FC Dallas and Real Salt Lake. The Galaxy's points potential is monstrous over the next few weeks and it would be foolish not to stuff as many players as you can into your starting eleven. Thankfully, there are options at a variety of price points, from the exorbitant - Robbie Keane ($11.8m), Landon Donovan ($11.5m) - to the agreeable - A.J. DeLaGarza ($7.0m), Dan Gargan ($7.3m), Gyasi Zardes ($7.9m). To seal the deal, take a look at LA's upcoming schedule: D.C. United, Chivas USA, Colorado Rapids, Montreal Impact and San Jose Earthquakes. That's four of five opponents that the Galaxy should not just beat but beat soundly, which is music to the ears of fantasy managers.

One final note - I'm encouraging all of you out there to troll New England Revolution and Toronto FC fans by asking, "So, how's the 'other Jermain(e)' doing?"

After a disastrous start to my week, I managed to savage enough points to finish above the average. This gave me just enough of a positive vibe to have my morale utterly crushed when I saw this week's best score in the Eighty Six Forever league. Once again, it's Farmer Greensleeves with a godly 159 for his SuperSounderHawks FC, good for the sixth-best score in all of MLS Fantasy Manager: 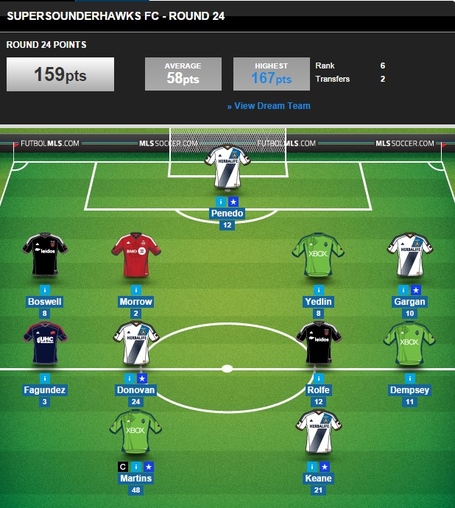 Step 1: Load up on players from good teams. Step 2: Wait for their big players to have DGWs. Step 3: Captain the right person. Congratulations! You now have a bucketload of points. To be fair, Farmer has front-loaded his team in this way with a bench devoid of reliable talent. I doubt Mr. Greensleeves cares with his obscene points total, though.

As mentioned earlier, LA have a DGW in Round 25 alongside another hot team, D.C. United. Here's the full schedule: 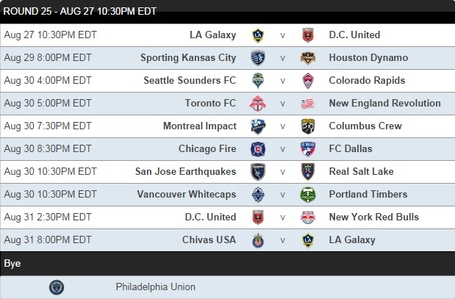 Bad Buys:
As we enter the final push towards the playoffs, transfers become so crucial. Have you used your wildcard yet? If not, will you be doing so this round or next? Let me know in the comments section below and I'll see you next week!