In which we eulogize the Colorado Rapids' season far earlier than expected and eulogize the San Jose Earthquakes about on schedule.

Share All sharing options for: MLS Fantasy Roundup 2014 - Round 23

Fantasy owners joined Colorado Rapids faithful in letting out a gasp and a massive groan when news came down that captain Drew Moor ($8.0m) was done for the season with a torn ACL and lateral meniscus. Moor joins Rapids defender Shane O'Neill ($6.5m) in the injury ward, which is not in any way helpful to the Rapids backline or their playoff chances. More importantly to fantasy owners, Moor was one of, if not the, last player worth having from the Rapids owing to being the highest-scoring defender in the entire game. Even more distressing, Moor's price point put him well below known commodities like Chris Schuler ($9.3m) and Aurélien Collin ($9.8m), making him a must-have in balancing your salary budget. Well, former-must-have, I suppose. It's an unfortunate end to a promising season for not just Moor but all of the Rapids, who looked like young world-beaters last year under Oscar Pareja and are sliding towards obscurity as conference make-weights without their captain. It'll be interesting to see what Pablo Mastroeni does in the off-season to either reinforce or reshape this squad.

Elsewhere in the Western Conference (a.k.a. "The Conference That Matters"), the San Jose Earthquake continue to look nothing at all like their Supporters' Shield-winning selves of 2012. In a bid to address this, the 'Quakes brought in Designated Player Matías Pérez García ($8.5m) to run their midfield. MPG's debut in Major League Soccer was a good one, culminating in a "Goal of the Week" candidate:

A sign of things to come, right? Unfortunately not: García is likely done for the season with surgery scheduled to repair meniscus damage to the Argentine's right knee. With the trade of Alan Gordon ($6.9m) to the LA Galaxy signalling the end of the "Bash Brothers" era in San Jose, this likely means San Jose's playoff ambitions are at an end as well. This shouldn't be as huge a hit to fantasy owners unless you went in on García early, in which case sell him ASAP. The rest of San Jose hasn't exactly been fantasy gold, Shea Salinas ($7.6m) notwithstanding, so I'm not expecting too many people to panic as San Jose's season winds up.

Before we get into this week's best score, a quick wag of my winger goes out to Western Conference teams involved in inter-conference play last round, as they only managed a pathetic 0-2-1 record. Los Angeles was stunned 4-1 by the Columbus Crew, the Portland Timbers only drew New England 1-1 and the Colorado Rapids, down their captain, succumbed to D.C. United 4-2. Memo to teams: when I spend most of an article bragging about how awesome your conference is, please try not to make me look like an idiot. Thanks.

The Eighty Six Forever league saw no change in the Top 10, though sub-par scores from the leaders saw the gaps close to slightly more conquerable levels. Further down the ranks, though, there was plenty of movement as wildly varying scores saw teams juggle positions. I even managed to creep back into the Top 50 with a solid 78 - yay me! Had I not left Tesho Akindele ($5.1m) and his 19(?!) points on the bench, I would've had the best score in the round. Sadly, because I for some reason started Fanendo Adi ($6.1m) in Akindele's place, the honour of best score goes once again to the team with the most delightfully whimsical name in all of MLS Fantasy Manager, the Muddletoot Society coached by Tudley Tudlowe: 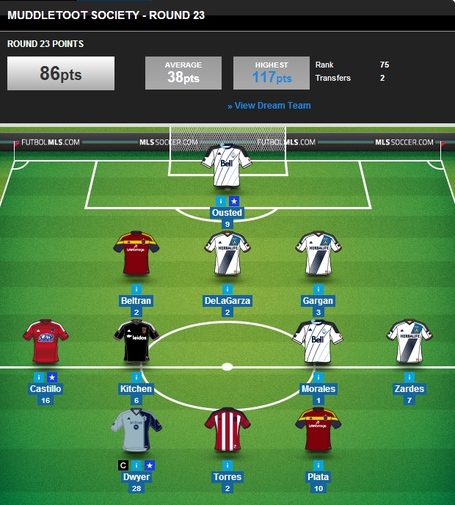 For Round 24, there are no pesky byes to worry about since two teams have double-game weeks: the Seattle Sounders and the LA Galaxy. Here's the full schedule: 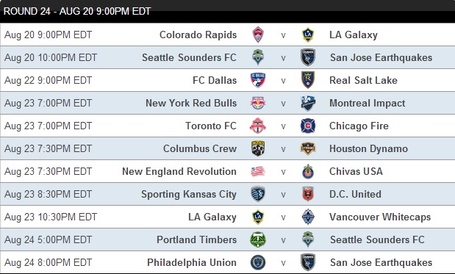 Bad Buys:
With the season entering the stretch drive, what's your plan for getting the most out of the playoff-bound teams? Let me know in the comments section and I'll see you next week with more fantasy news and nonsense!