In which we learned what teams are trending the right way (and are thus worthy of your fantasy attention) and that the East can't wait for cross-conference play to die off.

Share All sharing options for: MLS Fantasy Roundup 2014 - Round 22

If you're reading this, there's a good chance you're a fan of the Vancouver Whitecaps. If that's true, then it's very likely you believe the Western Conference is the superior conference. And if you believe that, good news - this past round's matchups appeared to prove that point. Real Salt Lake thumped D.C. United 3-0, Seattle Sounders kept the Houston Dynamo off the scoresheet with a 2-0 result and our very own 'Caps blanked Sporting KC 2-0. The west have done very well against the east this season, which has been a great help to fantasy owners when trying to decide who to field and who to bench in a given round. Unfortunately for us fantasy owners (and fortunately for Eastern Conference teams), that gravy train will be harder to latch onto as the regular season winds up. More and more teams have a schedule that leaves them squarely in their own conference with only a rare out-of-conference matchup (if any) left on the docket. If you have a chance to bet on the west over the east before the regular season ends, do it.

As we approach the playoffs and the final standings come closer to taking shape, it's time to be super-discerning about which team you're spending your transfers on. There's little point in hoping a team will reverse a bad turn of form when you could be picking the ponies that are still in form and delivering the goods. The Colorado Rapids, for example, are all but off my want list as they begin to show signs of coming apart at the seams. The lone exception is Drew Moor ($8.3m), who remains a valuable pick-up even in Colorado's current dire straits. Conversely, FC Dallas is a team possessed, currently sporting an eight-game unbeaten streak and looking like a team hungry to rip apart the contenders in the west. The Hoops are a great team to invest in and, unlike certain teams (*cough* RSL *cough*), are actually affordable to get into.

A familiar name popped up when I scanned the results from Round 22 in the official Eighty Six Forever MLS Fantasy Manager league. None other than Matt Delaney, he of the Company of Thorin, wound up with the best score in the league (and the seventh-best score in the game!) - a mighty 84 points, which looks a little something like this: 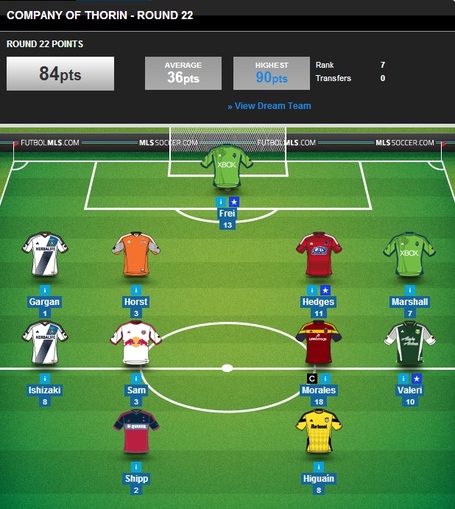 This is a masterclass of picking players from teams in form. Clean sheets for Seattle's Chad Marshall ($8.5m) and Stefan Frei ($5.1m), a goal from Dallas' Matt Hedges ($8.5m) and the usual magic from Javier Morales ($11.3m) and Diego Valeri ($10.3m) combined to give Matt more than enough to overcome weak showings from Harrison Shipp ($6.8m) and Dan Gargan ($6.9m). Welcome back to the winner's circle, Matt! Though not a super-warm welcome... you are a dirty Seattle support, after all. Blech.

There are no DGWs for Round 23 and the New York Red Bulls are on a bye. Here's how it all shakes out: 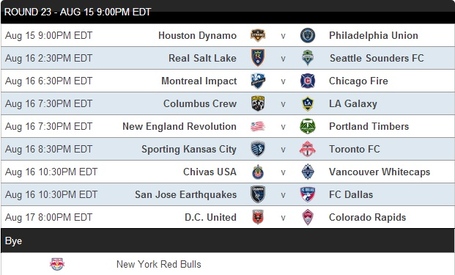 Bad Buys:
Who are you keeping and/or avoiding in the coming rounds? Let me know in the comments section below and I'll see you next week.