In which we learned the Chivas USA bandwagon has plenty of room and Houston really is nothing without Brad Davis.

Share All sharing options for: MLS Fantasy Roundup 2014 - Round 17

If I may be so bold as to quote last week's roundup:

When it comes to fantasy studs, Erick Torres is one name that keeps popping up as the season goes on. With Chivas on a double-game week, there's no reason not to have Cubo in your lineup. That same logic also applies to goalkeeper Dan Kennedy, who is dirt cheap to boot.

Nailed it. Cubo scored a golazo (made even better by the Spanish language commentary) against the Montreal Impact to cap off a two-goal week worth a big 14 points to fantasy managers. Erick Torres ($8.8m) wasn't the biggest earner on Chivas USA, though; that honour goes to both Dan Kennedy ($4.4m) and Carlos Bocanegra ($6.9m), both of whom logged 15 points on the back of two clean sheets in the same week. I guarantee you nobody in their right mind predicted a double-clean sheet for the Goats, though if you were smart enough to have Kennedy in goal and captained you undoubtedly made yourself look like quite the prognosticator. Does this mean it's time to hop aboard the roomy, rarely-used Chivas USA bandwagon? In Cubo's case, yes, though that's only if you haven't found a way to get him into your lineup already. In the backline's case, only Kennedy warrants holding onto for the time being. Chivas' performances against Vancouver this week and D.C. United next week will be the ultimate litmus test; if the Rojiblancos show well, dive in while the prices are cheap.

In the interest of fairness, let's also quote another part of last week's article:

As mentioned in the pre-World Cup roundup, the quarantine zone has been painted orange for its new tenant, the Houston Dynamo. The wheels have truly come off the bus, which is also on fire and teetering over the edge of a cliff. Don't buy, is what I'm saying.

...nailed it? In my defense, that statement was made in reference to the Dynamo sans Brad Davis ($10.4m). Now that Davis is back from international duty, Houston have magically found the will to live and gave the New York Red Bulls all they could handle. I still can't recommend anyone in orange for the time being, save Davis if his magic touch continues to produce all manner of fantasy points.

Speaking of producing fantasy points, only one member of the Eighty Six Forever fantasy league managed to do so into the triple digits. That would be Caleb James, manager of the Caps Lock-friendly DGWS 4 DA WIN, who scored the sixth-best total in the entire fantasy manager game with his Round 17 score of 110: 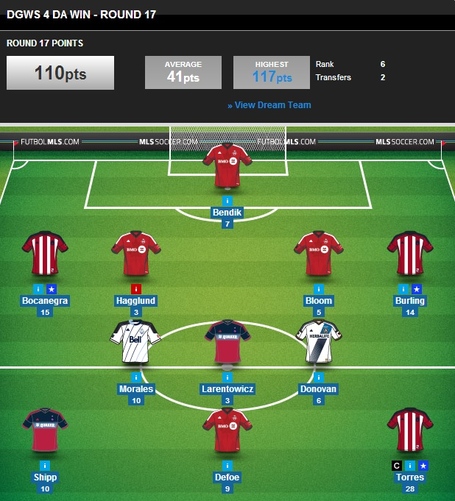 I may not be the biggest supporter of Jordan Harvey ($7.3m) but I will say this: given a choice between Harvey and Nick Hagglund ($5.1m), I will play Harvey every time. It's a minor quibble - seven points versus three - but it's about the only criticism I can find with Caleb's stellar roster. Captain Cubo and the Chivas backline carried the bulk of the load, though strong performances from Pedro Morales ($8.8m) and Harrison Shipp ($7.0m) shouldn't be discounted. Well done, Caleb!

The Round 18 schedule is a calmer one than most, with FC Dallas on a bye week and no teams with double-game weeks (in league play, at least): 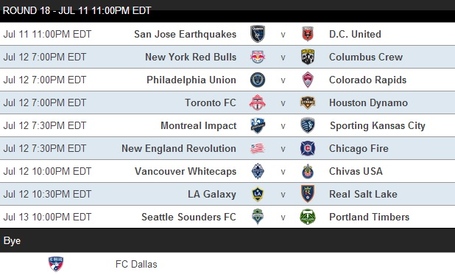 Agree? Disagree? Have an extended theory you'd like to bounce off me? Leave a comment below or, in a rare occurrence, tell me in person. I'll be at the Vancouver-Chivas match this Saturday, sitting in Section 204, Row T, probably cramming my face full of mini doughnuts. Mmmm, mini doughnuts...