In which we learned Seattle is mortal, Los Angeles is awake and Philadelphia apparently loves goalkeepers.

Share All sharing options for: MLS Fantasy Roundup 2014 - Round 20

So, how 'bout 'dem Seattle Sounders? They have one of the league's deadliest striker tandems in Clint Dempsey ($10.5m) and Obafemi Martins ($9.4m), are atop the Western Conference standings with an eight-point lead on Real Salt Lake and are level with Sporting Kansas City on points in the Supporters' Shield race. Naturally, this all adds up to them laying a goose egg at home against the LA Galaxy to the tune of 3-0, which is the point where I throw my notes and general guidelines into the garbage and go take a beach day because why the hell not. Yes, LA showed up the Sounders with authority, though this should not be taken as a sign that Seattle is floundering (even though I so desperately want them to). Seattle is a team that can and should recover with authority, especially since their next opponent is the hapless San Jose Earthquakes. That match could be a bonanza of points for fantasy owners once Sigi Schmid gets his team back on track.

(Side note: don't let one good San Jose result fool you. The 'Quakes are still not a good team; they just happened to be better than the also-not-good Chicago Fire.)

Let's not forget the other half of Monday's match, the Galaxy. They seem to have shaken off their early-season doldrums and are now charging up the standings like one would expect Bruce Arena's team to. Here's the crazy part: LA could be primed to get better. Reports rumours are suggesting USMNT midfielder Sacha Kljestan is considering a six-month loan from Belgian side Anderlecht, with the Galaxy being the obvious target for the California native. Now, if true, Kljestan would be subject to the allocation order - the allocation order in which LA traded up to third spot after sending Kofi Opare to D.C. United. Seems pretty legit, though the villainous scoundrel in me wants the Columbus Crew to use their #1 allocation spot to swipe Kljestan purely to thumb their noses at the Galaxy. What can I say? I'm a devious little so-and-so. One final fantasy note about the LA: three DGWs coming up in the next seven rounds. Yum.

Speaking of devious, let's all congratulate this week's master evil planner (as I call all winners of the best round score in the Eighty Six Forever MLS Fantasy Manager league) Todd Paulhus and his 89-point darlings, CANAUS. What do 89 points look like? Why, like this: 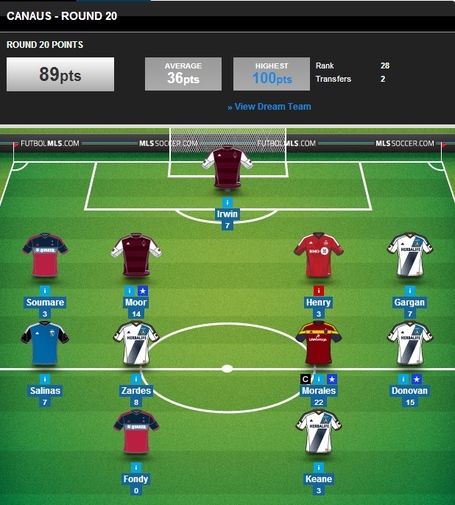 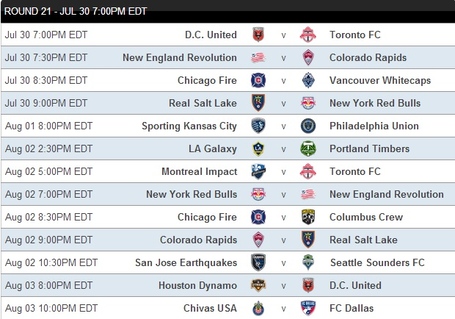 That's all for this round-up. What are your predictions and prognostications for the next few rounds? Share your thoughts below and I'll see you next week!