In which we learned that Philadelphia and New York are anything but sure bets and that the Dallas bandwagon is now boarding.

Share All sharing options for: MLS Fantasy Roundup 2014 - Round 19

Oh, New York Red Bulls. One week I'm hyping you up as a team to spend valuable fantasy dollars on, then you get thwomped 3-1 by the Philadelphia Union and only manage a draw against the woefully uninspiring San Jose Earthquakes. Inconsistency, thy name is New York - with, it should be noted, the exception of Bradley Wright-Phillips ($8.6m). The Red Bulls only managed two goals in Round 19, one per match, and both came off the boots of BWP. That's how you keep yourself relevant to fantasy managers on a losing team (see also: Torres, Erick and Chivas USA). Wright-Phillips is the highest-scoring player in MLS Fantasy Manager with 122 points and is very reasonably priced to boot. Do you have him on your team? No? Fix that. Who cares if he's on a bye week? BWP is money.

Continuing the inconsistent team showcase, let's look at Philly who, coincidentally, is also on a bye this week. The Union were starting to look like a team in form - though, to be fair, how often have we said that in 2014? - thanks to the efforts of Cristian Maidana ($7.6m). Maidana was on a bit of a tear, only dipping below 7 points once in five rounds. Then he left the first match of Philly's DGW with a left hamstring issue and, well... yeah. Suddenly, Philly looks primed to streak in the other direction without their playmaker and the question is once again being asked: "Philly, would it kill you to be consistent?"

But enough about these bye-week teams; let's talk about team actually playing this week. FC Dallas are facing off against the Vancouver Whitecaps and are starting to look like an attractive option. No, not in goal - Chris Seitz ($4.6m) has 58 points, well behind the leaders. No, not in midfield - we have no idea if Mauro Diaz ($7.8m) is anywhere close to his former self post-injury. Where Dallas is looking attractive is with two specific players: Matt Hedges ($8.5m), still a solid pick despite his team's poor fortunes; and Tesho Akindele ($4.5m), who is not only the brightest MLS product to come out of the Colorado School of Mines but could be the brightest Canadian product, as he is eligible to play for Canada at the international level. I realize that latter point is neither here nor there when it comes to fantasy football but hey, fans of the CanMNT - all six of us - will take any positive sign we can get.

Speaking of positive signs, there's plenty of positivity in the air for Bryce, this round's winner of best score in the Eighty Six Forever fantasy league. His 116 points propelled Atlantis off the ocean floor and up to 115th place. Here's how he did it: 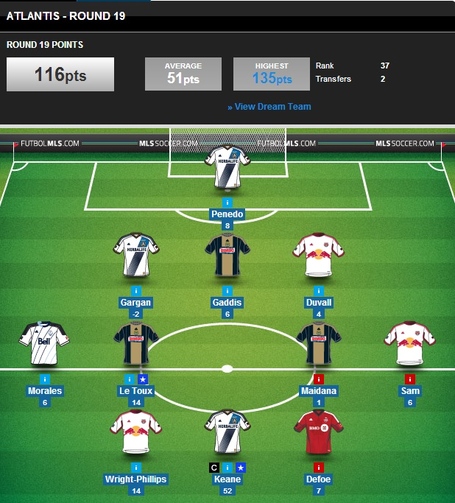 Well hello there, Robbie Keane ($11.0m)! So glad of you to join us this season. This, folks, is what you call "betting on the right horse". Who cares if the rest of his team - BWP and Sebastien Le Toux ($8.0m) notwithstanding - kinda pooped the bed? A 52(!)-point score from one player is money every day of the week. Nice pick, Bryce!

This will be a interesting round for fantasy managers, with four clubs (D.C. United, Houston Dynamo, New York Red Bulls and Philadelphia Union) on bye weeks. Only one team has a double-game week but considering that team is the Montreal Impact, let's just pretend there are no DGWs this week. 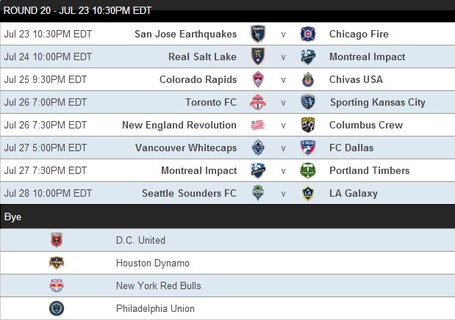 Are you on the BWP bandwagon? Do you have Cubo or Dwyer riding shotgun on your attack? Brag about your options up front in the comment sections below and we'll see you next week!