In which we learned a reliance on Vancouver attackers is a touchy thing and there are still a few teams with the capacity to surprise.

Share All sharing options for: MLS Fantasy Roundup 2014 - Round 16

On the one hand, I don't regret having taken a maximum compliment of Vancouver Whitecaps players in the last round of MLS Fantasy Manager. Goodness knows given a choice between the Montreal Impact and the 'Caps, I'd take our lads in blue and white 99 times out of 100. Certainly, captaining David Ousted ($5.7m) worked out well for me with that nil-all snoozer midweek - quite possibly the only positive thing one could say about that match. On the other hand, well, I'm sure the former manager of this blog would probably be waving the "regression to the mean" flag pretty darn hard at this point. Winning streaks are just that - streaks. The hype train was bound to slow down at some point; unfortunately for fantasy managers and 'Caps fans, it had to be during a double-week.

Meanwhile, there were plenty of surprise results elsewhere in Round 16, most notably with the afore-mentioned Impact. A 3-0 drubbing of the Houston Dynamo was certainly not in my predictions, though it does advance the doomsday clock another minute for Dom Kinnear as the Dynamo's season of misery continues. The Impact were paced by a brace from Jack McInerney ($8.1m); now, I know that might seem like the green light to jump on the Jack Mac bandwagon, heralding a return to his sizzling form with the Philadelphia Union, but I don't buy it. Take a "wait and see" approach with McInerney, as you should with any Impact player for the next few weeks. Maybe the acquisition of Ignacio Piatti changes that; I'm not holding my breath.

The other big surprise? Chivas USA refuses to go away quietly, which is a pleasant surprise for a franchise that desperately needs some success. Erick Torres ($8.7m) scored the winning goal for the Goats against ten-man Real Salt Lake, which makes the victory even more impressive. RSL is not a team you take lightly, even down a player, so for Chivas to walk away winners is really something. Oh, and don't look now, but Cubo is third in the Golden Boot race with ten goals. Ahead of him are Sporting Kansas City's Dom Dwyer ($8.4m) on 11 goals and New York Red Bulls' Bradley Wright-Phillips ($8.1m) with 12.

Over in the venerable Eighty Six Forever fantasy league, the Seattle contingent have clawed their way back to the top, with Benjamin Smyth's Eyes to the Evans taking the overall lead with his best-in-round score of 93: 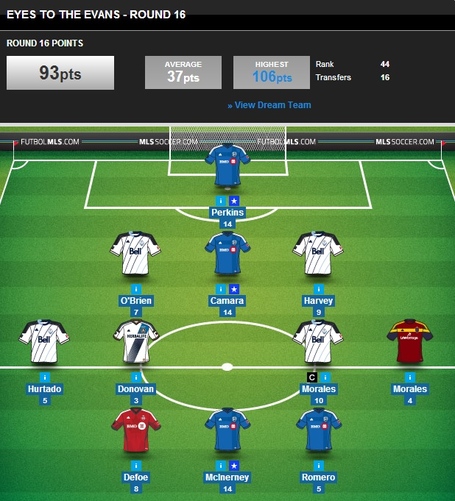 Yeah, six clean sheets from four players and three goals from your forwards will kinda help things along. While captaining Pedro Morales ($8.9m) was probably the smarter choice at the outset of the round, I'll bet Benjamin is kicking himself for not doubling up those juicy points from the backline. Still, that's nit-picking a 93-point haul, enough to vault Mr. Smyth into first place by a mere seven points.

On to the next round, and it's an interesting one: 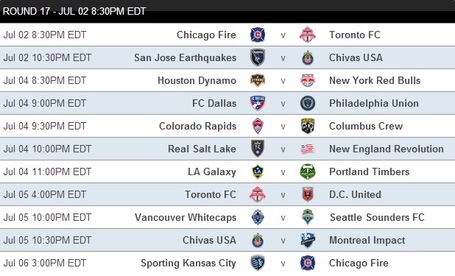 No teams on a bye? Excellent news for fantasy managers. Toronto FC, Chicago Fire and Chivas USA on double-game weeks? Well... maybe not so excellent.

Bad Buys:
As always, leave your hints, tips, tricks, comments, questions, reactions and brags in the comments section below. See you next week!