In which we learned it is possible to both loathe and love Cubo and the New York Red Bulls are making a solid case for fantasy owners again.

Share All sharing options for: MLS Fantasy Roundup 2014 - Round 18

Off the bat, a quick congratulations goes out to jarira for topping the Eighty Six Forever league in MLSSoccer.com's  World Cup Bracket Challenge. A score of 365, achieved thanks in no small part to correctly predicting three of the four finalists, left jarira 25 points clear of second place and an embarrassing 235 points clear of me all the way back in 37th. Well done, jarira! Congratulations on earning World Cup bragging rights for the next four years. Use them wisely.

Back in Major League Soccer, I'm trying to come to grips with my loathing of Erick Torres ($8.8m) as a 'Caps fan and my love of Cubo as a fantasy manager. The young Chivas USA striker is second among all forwards in MLS Fantsy Manager with 106 points, a mere two back of Golden Boot leader Bradley Wright-Phillips ($8.7m). (More on BWP later.) As has been pointed out by many others, Torres is the only practical option up front for the Goats and is reaping the benefit of service from Mauro Rosales ($7.4m). This tends to mean more chances on net for Cubo compared to his peers surrounded by a more capable supporting cast, which statistically speaking means a very good chance of more goals than said peers. Here's the rub: Chivas are on a winning streak not seen since 2008. For a team as bad as the Rojiblancos have been, one can't expect this run of good form to continue indefinitely (...right?). The trick for fantasy managers will be correctly predicting when to leap off the Chivas bandwagon and turn a healthy profit off Torres, Rosales and Dan Kennedy ($4.4m).

On the other side of the United States, the New York Red Bulls have their own scoring dynamo in the afore-mentioned Bradley Wright-Phillips; the different between BWP and Cubo is that the former is being fed by no less than Thierry Henry ($10.8m), who by all accounts is running this team with a cool, calm precision befitting a team with ambitions far larger than their trophy collection. Fantasy managers have been rightly spooked by NYRB in the past but this is a team not only in form but capable of sustaining with a supporting cast of players like Lloyd Sam ($7.1m), Luis Robles ($6.2m) and a now-healthy Dax McCarty ($7.5m). At the very least, as long as Titi and BWP continue to hook up, there are good times ahead for fantasy managers. Oh, and New York have double-game weeks (DGWs) in Round 19, Round 21 and Round 27, so, there's that.

For this week's winner of best round score in the Eighty Six Forever fantasy league, I had to take a trip all the way back to 149th place. That's where I found Leung Derek's Evergrande, they of the 80-point Round 18: 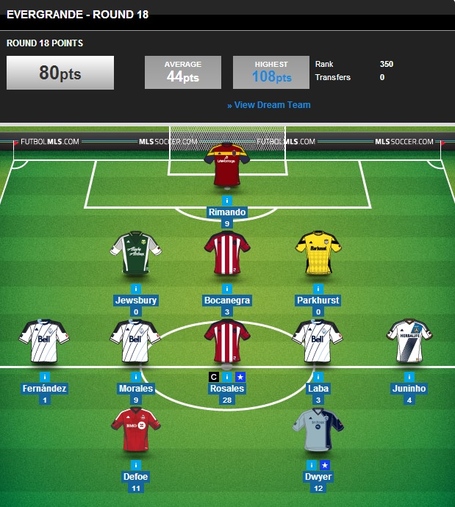 Captaining Mauro "Three Assists" Rosales will certainly help your score along, as will solid days at the office for Jermain Defoe ($11.4m) and Dom Dwyer ($8.6m). Add in nine points from Pedro Morales ($8.9m) in a losing cause and nine points from Nick Rimando ($6.0m) thanks to a penalty save and you have yourself enough points to overcome less-than-stellar outings from the defensive line.

Only Seattle has a bye in Round 19, while eight(!) teams have DGWs. Here's how it all breaks down: 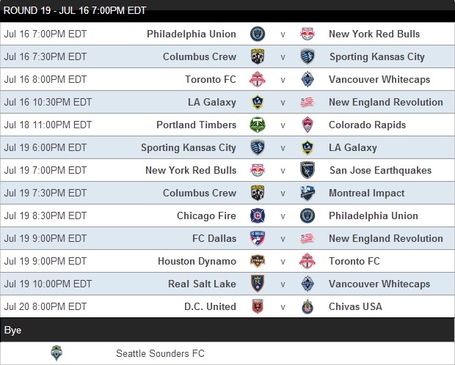 And with that, I'm off to prepare for tonight's USL PDL single-match playoff between the Vancouver Whitecaps U-23 and my beloved Victoria Highlanders. It's winner-take-all at Royal Athletic Park, which means I'm going to need some more throat-protecting honey tea to assist my ninety-minute assault on the ears of the referee.