In which we learned even horrible teams can win a game and even decent fantasy managers can do horribly.

Share All sharing options for: MLS Fantasy Roundup 2014 - Round 13

The surest thing in the world is a team atop the standings playing a team at the bottom, right? Obliteration, annihilation, destruction, pain, misery... it's all going to come in waves and the end result will be a fantasy manager's bonanza for those who bet heavily on the New England Revolution. Let's take, for example, oh, say, me. I was so confident in New England I even made Diego Fagundez ($8.0m) my captain in preparation for the utter rout the Revs would put on the Montreal Impact.

Say, how'd that work out?

If you'll excuse me, I'm going to go find the nearest pint of ice cream and devour it.

Yes, it appears Montreal decided they actually felt like winning this season and picked a fine time to do it - at home against the Eastern Conference leaders. Great for l'Impact, horrible for me and many others who thought the Revs would be able to cakewalk their way across the 49th parallel and back. With any luck, this Sunday's home match against the New York Red Bulls will be just the thing to get New England back on track. Montreal, meanwhile, are on a bye, so no worries about sudden upsets there for a while.

Elsewhere in Round 13, there were two clean sheets of note. First, the Seattle Sounders ended Real Salt Lake's unbeaten start to the season with a 4-0 thwomping at CenturyLink Field. Much like Montreal winning was an unexpected blip on the radar, I don't see this being anything other than a rare outlier in RSL's form. There's no need to jettison players yet, especially since a) the World Cup Wildcard is coming up, and b) RSL players are as pricey as gold-plated caviar. If you've got one, hang onto it for dear life. The second clean sheet of note from the weekend was a 3-0 scoreline between the surging Colorado Rapids and the faltering Houston Dynamo. I'm ditching Dynamo players as fast as I can (all it took was a 38-point performance for me to finally abandon the sinking ship that is the Dynamo) and you'd be wise to do the same.

While I posted an entire page of red arrows and embarrassing rank drops this round, there was one person in the Eighty Six Forever league who did the opposite of that and triumphantly stood above the rest in victory. That person is Richard Matthew, whose DamagedGoods looked far better than my train wreck of a squad with their 93 points: 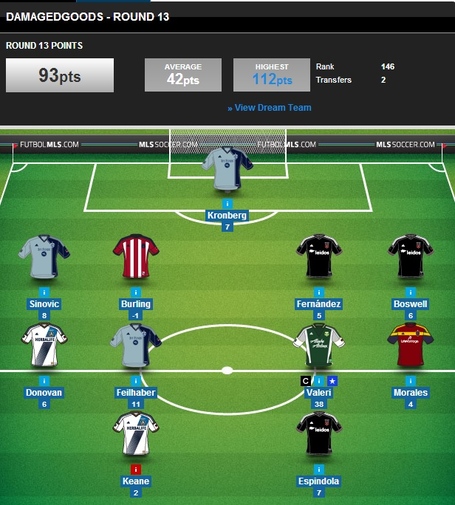 Nothing too earth-shattering here: captaining Diego Valeri ($10.5m) on a double-week is, believe it or not, a good idea. Solid performances from Sporting Kansas City and D.C. United also boosted Richard's score, which is also good because Bobby Burling ($5.1m) stunk up the joint with a -1 score thanks to goals conceded and a red card. DamagedGoods now sits 5th in the 86F league, behind Aldergrove Warriors (4th), Eyes to the Evans (3rd), Have A Go Heroes (2nd) and Deuces Wild (1st).

Special mention this week goes to now-85th-placed (so close to the magic 86!) Salt Dogs, coached by Max Iwaniec. Max technically had the highest score in the round with 96 but took a massive -12 penalty for making five transfers in the round. For coming so close to a memorable upset(?), Max, we salute you with this quick shout-out.

We're almost at the World Cup break, so use your transfers wisely. Don't go taking penalty points when a wildcard is just around the corner. Here's the Round 14 schedule: 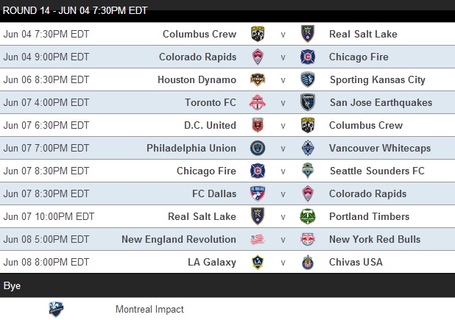 See you next week, where I'll hopefully be back above the average round score!