In which we learned the World Cup break couldn't come fast enough for some teams and the wildcard transfer mania is in full swing (again).

Share All sharing options for: MLS Fantasy Roundup 2014 - Round 14

(* This is not guaranteed at all.)

Ah, back in the land of above-the-round-average scores! 49 points is nothing to write home about, to be sure, but it sure beats the stinker I laid in Round 13. Whoof. Thankfully for me and a few MLS squads, the World Cup break is upon us, offering real-world teams a chance to rest and regroup and offering fantasy managers a chance to go bonkers with another wildcard round. If you aren't transferring to your heart's content, you may want to get on that, chop-chop. Only four teams play this round - D.C. United, FC Dallas, the Montreal Impact and the Portland Timbers - so now is the time to cram as many players from those teams as you can into your starting roster. (Late breaking bulletin - Bill Hamid ($5.2m) did not travel with his team to Montreal. If he's your starting goalkeeper, get him out of there ASAP!)

More importantly, this is also the time to drop players from underperforming teams as fast as possible. The Houston Dynamo, for example, are a shell of their former selves. While you could count on the likes of Corey Ashe ($7.0m) and Kofi Sarkodie ($6.2m) early in the season, it's near impossible to have any faith in them or the rest of the Dynamo after they dropped a 2-0 decision to the walking wounded of Sporting Kansas City. Remember when playing in Houston was about as daunting a proposition as an away match in Portland? Not so much any more, apparently. Head coach Dominic Kinnear will no doubt be using every minute of the World Cup break to try and jumpstart his squad back into a playoff spot. You should be using every minute of this wildcard to drop Houston players like hot potatoes.

Likewise, the luster may be off the New England Revolution after they came up short for the second week in a row, dropping another 2-0 decision - this time to the New York Red Bulls. This Revs squad, may I remind you, is still atop the Eastern Conference standings thanks to a blazing hot run back in April and May that saw them go unbeaten in seven, winning six(!) and drawing one. For that reason, I'm keeping Patrick Mullins ($5.1m) as a cheap depth striker in case New England finds their scoring boots post-World Cup. The rest? Gone. Jay Heaps, it's up to you to prove me wrong for ditching Diego Fagundez ($7.8m), though I'd just as soon prefer you not since, y'know, I kinda need the points.

Speaking of points, while it was another week of mostly red arrows for me (I won a round in one of my head-to-head leagues, so, woo! Small victories!), it was a big green arrow for this week's best score: a 94 posted by Rich Woodhouse, Okanagan Caps Fan: 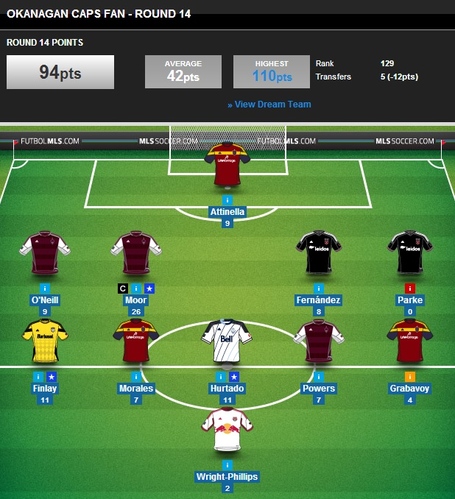 So, that Drew Moor ($7.6m) is kinda good on the backline, eh? A 13-point weekend for the Colorado defender - good enough for a position in the weekly dream team - certainly indicates Moor should be on your radar, especially if he keeps producing at his current clip. In the last six rounds, Moor has registered below 5 points only once. That's a solid defender to build around. Moor's partner in Colorado, Shane O'Neill ($6.5m) was no slouch either, registering 9 points on a DGW while Vancouver wunderkind Erik Hurtado ($6.0m) kicked in a marvellous 11 points. Well done, Rich!

Only two midweek matches to worry about before the World Cup break, and they're pretty straightforward:

Enjoy the World Cup, everyone! I'll be back with another Fantasy Round-Up after Round 16, the first full round of league play after the break.