In which we learned it is not wise to place all your hopes on a slumping team earning clean sheet and I finally succumb to the Deuce hype.

Share All sharing options for: MLS Fantasy Roundup 2014 - Round 9

You'd think I would've learned my lesson about putting an abundance of faith in the Houston Dynamo considering the results of last weekend. You'd think being stomped 4-0 by the New York Red Bulls and only managing a 1-1 draw against the Portland Timbers would be a massive neon sign to the effect of "HERE BE NO CLEAN SHEETS". Sadly, I apparently did not use my thinking brain for this past round of MLS Fantasy Manager as I placed the bulk of hopes and dreams on the trifecta of Tally Hall ($6.1m), Kofi Sarkodie ($6.5m) and Corey Ashe ($7.2m) keeping the ball out of their net. Bad move - damn you, Erick Torres ($8.7m). Sure, Ashe got me an assist but I would've preferred a healthy 12 points for a clean sheet times three!

That said, hands up if you predicted the Colorado Rapids would get a clean sheet against the visiting Los Angeles Galaxy. (Put your hand down, you liar.) Clint Irwin ($4.9m) hasn't been the hot fantasy item he was last season, only being owned by 6.3% of all fantasy owners. Don't look now, folks, but Irwin's last four rounds have gone 9, 7, 2 and 8. Three clean sheets in the last four rounds? Not too shabby. Can it continue? Considering Colorado's next two opponents are the San Jose Earthquakes away and Chivas USA at home, there might indeed be one more clean sheet for Irwin and the Rapids.

As we begin a massive double-game week (DGW) here in Round 10, I have filled up ten of my eleven starters for this round with DGW players. Not too shabby, if I do say so myself, though it does mean I'll be less able to cash in on Sporting Kansas City and/or Philadelphia Union players for the Round 11 DGW unless I want to take a transfer penalty. One of those Round 10 DGW starters I picked is, finally, after being negative on him week after week, Clint Dempsey ($10.9m). Deuce's value is still skyrocketing and, if nothing else, I want in on some sweet, sweet profits once I sell him with my free Round 11 wildcard. I'm even going the extra mile and captaining Dempsey this round, hoping his strike partnership with Obafemi Martins ($9.8m) - whom I also have - will continue to pay dividends.

While Deuce and Oba may be a formidable one-two punch for the Seattle Sounders, there's no longer a Seattle one-two atop the Eighty Six Forever fantasy league table. While Benjamin Smyth's Eyes to the Evans remains the top dog, a new, non-Seattle-supporting challenger has usurped the second place spot: Vancouver Whitecaps supporter Tony O'Donoghue and Have A Go Heroes. The Heroes didn't just log the best score in the league, their 93 points were tops in the game: 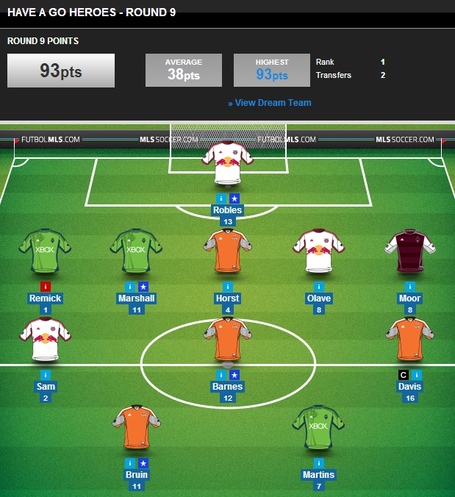 Whereas I banked on Houston for defensive points, Tony did it the correct way and took Houston for offensive points. A ten-man Chivas USA did wonders for the points totals of Will Bruin ($8.4m), Giles Barnes ($7.4m) and Brad Davis ($10.8m), though the Have a Go Heroes also benefited from a timely Chad Marshall ($8.6m) goal and clean sheets from the Colorado Rapids and the New York Red Bulls - the latter being preserved by a Luis Robles ($6.0m) penalty save. All told, it was a solid selection of talent that should only need a few tweaks to maximize itself for the upcoming DGW. Well done, Tony!

Here's the schedule for Round 10, brimming with double-game goodness: 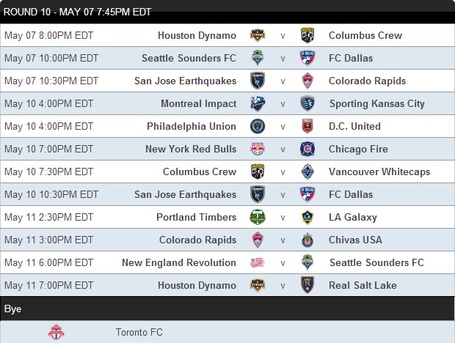 As always, share to your heart's content below. Who are you pinning your hopes on in Round 10, and what are you planning to do with the free wildcard in Round 11? See you next week!