In which we learned I stink at picking captains and some player scored some goal that had some sort of importance.

Share All sharing options for: MLS Fantasy Roundup 2014 - Round 12

I was going to open this week's round-up with a none-too-subtle satire on MLS trumpeting a certain goal that a certain player scored on Sunday until I realized that in this day and age, getting an e-mail from a league for the sole purpose of celebrating a player setting a new statistical milestone is probably par for the course. If Sidney Crosby breaks a major Wayne Gretzky record - for the sake of argument, let's say career playoff goals - I can see NHL.com going bonkers with the hype train. Likewise, if LeBron James passed Kareem Abdul-Jabbar's six league MVP trophies, the NBA would probably be plastering the digital walls of the internet and the physical walls of ESPN with "WE LOVE YOU LEBRON" banners. Getting a "breaking news" alert via e-mail? Probably not as offensive after a sober second thought. (For the record, I still think it was a stupid idea.)

So what does all of this mean for fantasy owners? It means Landon Donovan ($10.7m) and Robbie Keane ($11.0m) made the most of a struggling opponent in the Philadelphia Union and put them to the sword, romping to a 4-1 win on Sunday and banking a mighty haul of fantasy points for Round 12 - 18 for Donovan, 23 for Keane. If Donovan is going to go on a post-snub tear through MLS, now is the time to pick him up before his price rises. LA Galaxy has a decent schedule before the World cup break - away to the Chicago Fire, home against Chivas USA - so it won't be a bad investment for the short-term.

Know what was a bad investment? Giving the captain's armband to Stefan Ishizaki ($7.4m). I knew there'd be an element of risk giving the LA midfielder the captaincy but cripes, not that much risk: eight points at the end of the round, including the double-points bonus? Yikes. I envy those of you who took a far more calculated risk and gave the armband to one of the in-form strikers like Dom Dwyer ($8.4m), Patrick Mullins ($5.0,) or Bradley Wright-Phillips ($8.0m). Dwyer in particular had a great round, netting a brace against Toronto in a full 90 minutes of work for a total of 12 points. I'd hang onto the Sporting Kansas City striker for as long as he stays hot.

Before we get into this week's winner of the coveted Eighty Six Forever League Best Score Shout-Out, a quick plug for the official Eighty Six Forever Brazil Bracket Challenge. Make your World Cup bracket, predict who wins what where and you could get the ultimate prize of, um, bragging rights! Yeah! Quick side note: if you don't pick Mexico to make it out of the group stage, expect to hear about it from Jorge Mendoza. Right, with that out of the way, onto last round's big winner - and I do mean big, considering his 140 points was nearly double my paltry 77 - Marcus Bernardino, whose Northern Waves did the opposite of me and captained the correct member of the LA Galaxy: 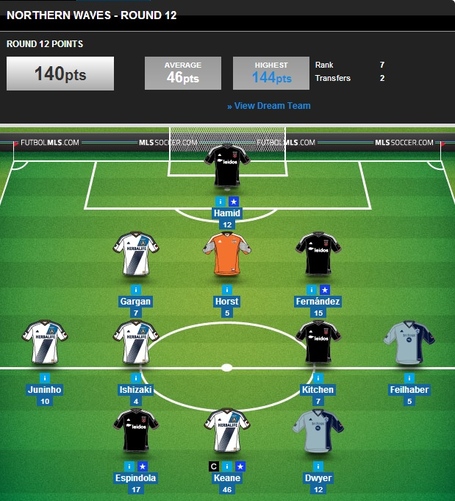 Sorry, I need to go wipe up the drool that resulted from seeing a captained player earn a ginormous 46 points. Yowza. It's not like the rest of Marcus' team was a slouch either, with Dwyer, Fabian Espindola ($8.8m), Christian Fernández Salas ($7.0m) and Bill Hamid ($4.9m) all making solid contributions. You may have noticed the last three players in that list were all from D.C. United. I've said it before and I'll say it again: this is not the 2013 version of D.C., something teams and fantasy managers still appear to be coming to grips with. Not Marcus, though - well done, Mr. Bernardino!

Here's the schedule for Round 13, with DGWs for Sporting Kansas City, Chivas USA and the Portland Timbers: 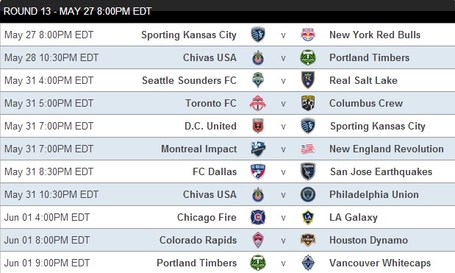 Who are you picking up to see you through to the World Cup break? Spill your secrets in the comments section below and I'll see you next week!