"That" penalty kick changed the outcome of the match against our Cascadia foes on Saturday, but did the referee actually make the right call? Tell us what you think!

Share All sharing options for: We Wuz Robbed! (Maybe)

The controversial penalty awarded by referee Ismail Elpath to the Seattle Sounders on Saturday afternoon sparked off a heated debate amongst fans, pundits and tinfoil hat conspiracists alike, who have subsequently thrown their hats into the ring to debate whether Elfath made the right decision or not. 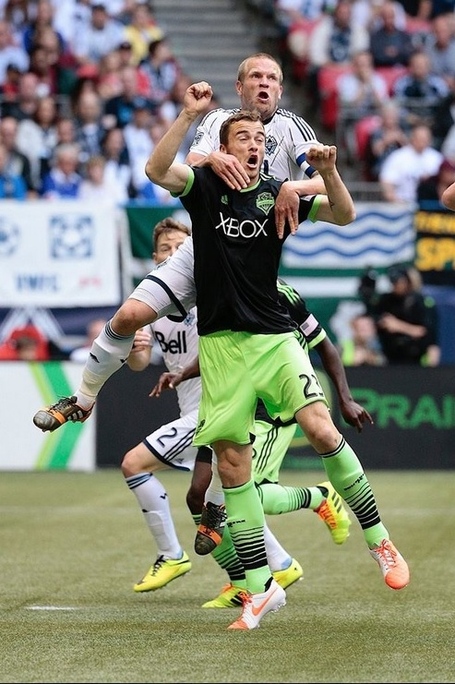 The above picture showing Jay DeMerit with his hands draped over Cam Weaver can be found on the Seattle Sounders' Facebook page (unedited version shown here) and it certainly must be considered.  Examining a still photo days removed from a heated derby match is very different than being on the pitch during the heat of battle.  We must, however, examine all the evidence available to us, so suspend your judgement for a moment and take a look at a replay of the moment in question:

Now having had a chance to see both pieces of evidence what do you think?  We here at Eighty Six Forever would like to put it to you and have you weigh in: Was it or was it not a penalty?  Please take the time to answer the poll or leave a comment in the comments section below.