In which we learned that there's no such thing as a sure fantasy bet and there's a new power rising in the Eastern Conference.

Share All sharing options for: MLS Fantasy Roundup 2014 - Round 11

So, how many of you met the same fate as me by captaining Aurelien Collin ($9.9m)? On the surface, it seemed like a no-brainer play going into Round 11's double-game week (DGW). Collin, a stud fantasy defender by any metric, playing games against the Philadelphia Union and Chicago Fire should be money in the bank. Ah, but there's that tricky phrase: "should be". There's no such thing as a sure bet in fantasy sports, no better exemplified by Collin leaving with an injury against Philadelphia and not returning for the second match against Chicago. A whopping three points (double with the captain's armband to six)? Yippee. If only I'd gone with any of the other Sporting Kansas City options on my team - goalkeeper Eric Kronberg ($5.3m, 8pts), midfielder Benny Feilhaber ($8.4m, 9pts) or forward Dom Dwyer ($8.4m, 13pts) I would've handily improved on my 66-point haul.

Of course, I could've also improved my points total by benching the New York Red Bulls' Bradley Wright-Phillips ($8.1m) in favour of the New England Revolution's Patrick Mullins ($4.9m). While Wright-Phillips has been one of the few bright spots in an inconsistent NYRB campaign, Mullins is part of a surging Revolution squad that scored ten goals in their last two games. Ten! If that didn't shock you, take a gander at the current MLS standings. That's right - New England is atop the Eastern Conference standings with 20 points, thanks to a six-game unbeaten streak (5W, 1D). Now would be an ideal time to load up on the likes of Mullins, Teal Bunbury ($6.7m), Diego Fagundez ($7.7m), Lee Nguyen ($8.9m), Andrew Farrell ($7.3m) and Anthony Soares ($8.4m). Be careful if you decide to go after a New England goalkeeper; last week, our old friend Brad Knighton ($4.5m) got a surprise start over Bobby Shuttleworth ($5.3m). A vigilant eye may be needed to check for last-minute roster updates in goal.

It was an off week for the top trio in the Eighty Six Forever fantasy league, though all three of Have A Go Heroes, Deuces Wild and Eyes to the Evans did manage to hold their positions thanks to that mighty lead - a lead that has shrunk to a mere 20 points between 3rd and 4th. While there were some great 90+ scores among the frontrunners that helped shrink that gap, it was a player from the middle of the pack who won the honour of the best score of the round. Eli Adansi's EAsoccer was the only squad to hit the magical three-digit score, clocking in at an even 100 points to leap up to a tie for 55th place. Here's how he did it: 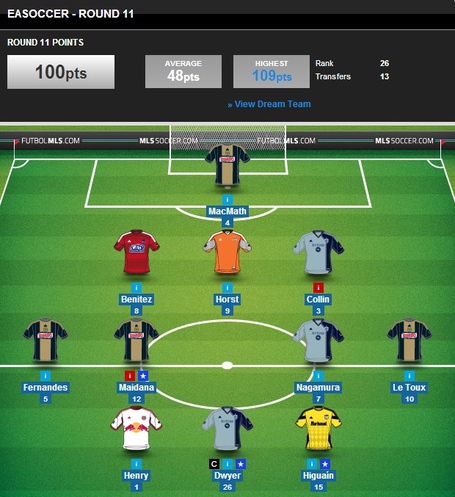 Interestingly, after thirteen transfers over the course of the free wildcard, Eli went in on Philadelphia for his double-week team. It paid off as Cristian Maidana ($7.1m) and Sebastien Le Toux ($8.3m) logged decent point totals, though Maidana did pick up a red card in the latter game of the DGW. Excusing Collin, Eli's defenders performed well with Houston's David Horst ($6.6m) picking up a clean sheet and Dallas' Jair Benitez ($6.3m) contributing an assist. Up front, Eli made the correct decision to captain Dwyer, though he could've also captained Federico Higuain ($10.5m) who went beast-mode against Portland with a brace and an assist.

Round 12's DGW participants are D.C. United, the LA Galaxy, FC Dallas and the Houston Dynamo. The full schedule is as follows: 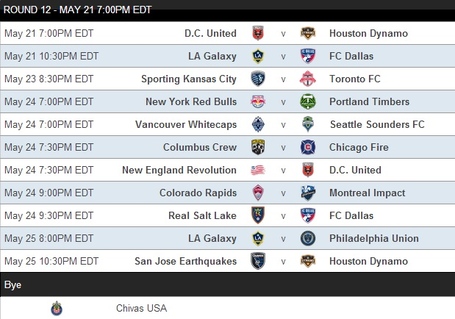 If you haven't already done so, don't forget to remove your World Cup participants from your roster before you lose out on points and player value. Good luck and see you in Round 12!