Why I Care About the USL PDL

My beloved Victoria Highlanders begin the defense of their USL PDL Northwest Division and Western Conference championships this Sunday, May 4th at Royal Athletic Park against Vancouver Whitecaps FC U-23. I have been waiting months for this day to come. Read on and find out why you should be stoked, too.

Share All sharing options for: Why I Care About the USL PDL

The photo you see leading into this article is of me, decked out in Victoria Highlanders FC regalia at work. The date is August 2nd, 2013. Shortly after this photo was taken, I commenced an exceptionally nervy day at work, trying my best to focus despite the clear target of my attention on the day: the United Soccer Leagues (USL) Premier Development League (PDL) finals. This was the culmination of a season of phenomenal success for the Highlanders, having taken both the USL PDL Northwest Division title and the Western Conference crown in a campaign that has already been etched proudly in the young history of the club.

(Side note: is USL PDL a mouthful of a league name or what? There should be a four-character cap on all professional sports leagues acronyms.)

I skipped out for a longer-than-usual lunch that day, joining in the livestream viewing party at a local pub for the first half. However, I had to sprint back to work to do, well, the exact opposite of that despite assurances to my bosses that, yes, I would definitely be able to remain focused. To be fair, I did remain focused, just not on my job; for the next 45 minutes, I lived and died with each kick of the ball and, tragically, I died more than I lived. In an all-Canadian match, the Thunder Bay Chill notched a dominant 2-0 win over the Highlanders to advance to the USL PDL finals. While I took some solace days later knowing the Chill lost 3-1 to the Austin Aztex, in that moment, I was crushed beyond belief. Not since the Vancouver Canucks' cinderella run in 1994 had I been so crushed by a post-season campaign coming to an end. This was taken shortly after the final whistle: 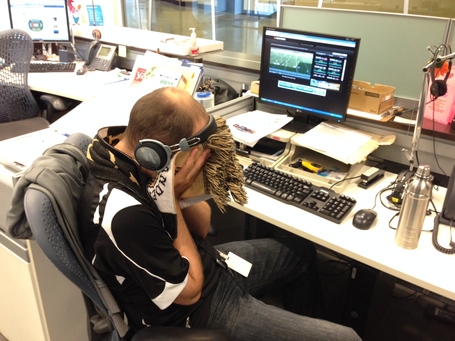 It has been a long nine months since that day. There hasn't been a week where I haven't envisioned myself at Royal Athletic Park, screaming, singing, chanting and lobbing streamers from the supporters' section. Many a drive/walk home from work has been spent singing to myself to test out various songs that could be repurposed as supporter chants. (My current favourites are The Who's "Baba O'Riley" for Riley O'Neill and Billy Joel's "You May Be Right" to celebrate last season's results.) I've been an active promoter of the team on Twitter, throwing down #VHFC and #COYH ("Come On, You Highlanders!") with aplomb.

In short, I love this team. It's my team - something I can proudly say both as an islander and as a season ticket holder/part-owner - and I am itching for Sunday to get here so I can kick off a summer of raucous support by watching the first leg of the Juan de Fuca Plate. Becoming a supporter and season ticket holder of the Highlanders was easily the best sporting decision I've ever made; I regret absolutely nothing when I'm leaning against the railing at Royal Athletic Park, spewing obscenities at the referee or that [expletive] joker on Seattle Sounders U-23 who thinks he's such a big shot when he does his circus-trick flipping throw-in.

(As an aside, I'd love to go into detail about why the Plate alone should be enough to get any Cascadia Cup-loving fan out of their seat and down to a USL PDL match but, honestly, all the best arguments have been done already by the great the talented profane nutcase Benjamin Massey over at Maple Leaf Forever! Go read those and be inspired.)

So, why should you, reader of this blog and likely consumer of Whitecaps first team news, care about a match between the 'Caps U-23 squad and an island-based semi-professional team, both of whose seasons last a mere three months? As I see it, this league is the WHL to Major League Soccer's NHL. This is where you're going to see prospects who are itching for first team minutes, hoping to push their way onto a bigger stage. This is one of the last chances for a nascent career to either blossom into a full professional or languish into mediocrity. It is compelling soccer, to say the least.

As an islander, I'll readily admit there's something of an inferiority complex when it comes to the mainland; Victoria is to Vancouver as Portland is to Seattle, as it were. Perhaps I'm over-hyping the importance of the upcoming season and this weekend's Salish Sea derby through my island-tinted glasses.

Then I remember who finished first in the Northwest Division and claimed the Western Conference title in 2013. Was it Seattle Sounders FC U-23? Nope, they finished 4th. Vancouver Whitecaps FC U-23? Again, no; 3rd place for the Blue-and-White. Portscum Timbits Portland Timbers U-23? 2nd place only for Stumptown. Oh, that's right - a wee li'l island club trounced all three MLS-affiliated clubs in our division en route to a franchise best season.

Next up? The Juan de Fuca Plate.

Come on, you Highlanders!