In which we learned I still have impeccably horrible timing and Bradley Wright-Phillips still has an impeccably fine finishing touch.

Share All sharing options for: MLS Fantasy Roundup 2014 - Round 10

Gee, thanks, Clint Dempsey ($10.6m). How many weeks did I go on about how your performance was bound to average out, only to have you post more unsustainable numbers? And, after I finally cracked and bought in to the Seattle hype, what did you do in a double-game week (DGW) in which you were my captain? Sweet bupkis by previous standards. Five measly points out of two matches?! I thought we were done with this nonsense after the curse of Leonardo Fernandes ($5.0m) was lifted! Bah! Thank goodness I was able to get rid of Deuce at a break-even price thanks to the gift that is Round 11 Wildcard Mania™.

Yes, that's right - if you're reading this before the Wednesday mid-week match takes place, you still have time to take advantage of a completely free transfer wildcard! I've been trying to ride the price of top players like a junior stock market investor with some degree of success - "some" being the operative word, as my gains have been cancelled out by twitchy roster fiddling as FIFA World Cup call-ups are announced and my general opinion on an upcoming match flip-flops. Even if you're not trying to play the MLS Fantasy Manager meta-game and weasel a few extra dollars into your team value, you still have a golden opportunity to reshape your squad in advance of the World Cup and more DGWs.

One person you'd be foolish not to take advantage of is New York Red Bulls striker Bradley Wright-Phillips ($8.0m), who is on fire with eight goals in four games. Pessimists might note he's only scored nine goals total all year; optimists might note Wright-Phillips' price has shot up and could offer a good monetary gain, if nothing else, during ye olde season of free transfers. Beyond this month's striker of the moment, another rising stock to take note of is, surprisingly, D.C. United. The former laughing stock of Major League Soccer and current defending Lamar Hunt U.S. Open Cup champ (the mind still boggles on that one) is on an upward trend and have a DGW in Round 12. While D.C.'s final opponent of that three-match string is another hot team - the New England Revolution - their preceding two matches are against the Montreal Impact and the Houston Dynamo. Grabbing at least one D.C. player - say, Fabian Espindola ($8.6m) or Bobby Boswell ($8.5m) - is not nearly as risky a proposition as it was in Round 1.

Over in the Eighty Six Forever league, Round 10 was thick with triple-digit scores for those who invested wisely and captained smartly. No fewer than fifteen teams cracked the 100-point barrier, littering the rankings page with green and red arrows as teams jockeyed for position like they were in a super-sized Kentucky Derby. (Seriously, what other soccer blog is going to make week-old horse racing references, folks? This is quality right here - grade A quality.) Leading the pack for the second week in a row was Tony O'Donoghue and his Have A Go Heroes, who banked a whopping 121 points to move into first overall in the 86F league and fourth overall in all of MLS Fantasy Manager(!). Here's how Tony's squad did: 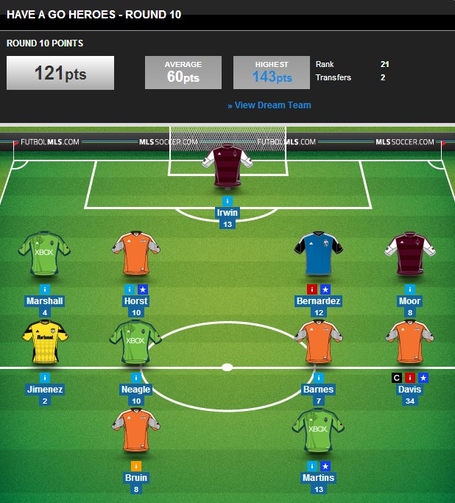 So, that Brad Davis ($10.6m) is kind of a good player, eh? A solid 17 points from the Dynamo midfielder ensured Tony's choice of captain did not go to waste and a wise investment in the clean-sheet-happy Colorado Rapids paid serious dividends. Contributions from the likes of Lamar Neagle ($8.2m), Obafemi Martins ($9.9m) and Victor Bernardez ($8.4m) did not go unappreciated, either. Well done (again), Tony!

If you want to try and catch the Heroes, you'd better pay close attention to the schedule over the next few weeks. Careful planning of your transfers following the free wildcard madness will be crucial leading into the World Cup break. Here are the matches for Round 11: 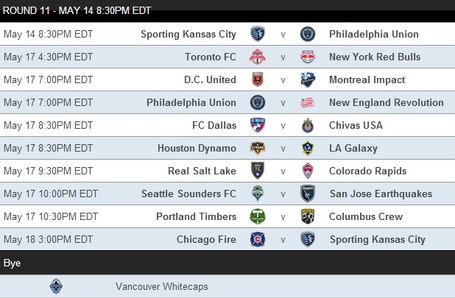 As always, feel free to share a tale, spin a yarn or otherwise yakkity yak down in the comments section below. How active have you been in this freebie wildcard round? See you next week!