In which we learned that it is indeed possible to break the "Fernandes curse" and Columbus screwed many people over.

Share All sharing options for: MLS Fantasy Roundup 2014 - Round 5

First off, a big thank-you to the Whitecaps front office for inviting me to the 2013 Fantasy Winners suite for this past weekend's match against the Colorado Rapids. It was great to talk with such a fun group of other like-minded fantasy managers and to debate the relative merits of this year's crop of players, all while the match played out below us. With any luck, I'll be able to earn another trip based on my performance this year - though it certainly won't be because of the debacle that went down in Columbus.

I mean, come on, Columbus Crew - what the [expletive] happened?! This was a Toronto FC team that had no business escaping Crew Stadium with a 2-0 away win, especially after I took a four-point hit to bring in Federico Higuain ($10.9m) and captain him - to be fair, he did score five points in a no-goals, no-assist effort. My only saving grace there is that many other fantasy owners also got taken to the cleaners banking on a Columbus result, so all I have to worry about is catching up to those who predicted good things for the Los Angeles Galaxy or from the Cascadia slugfest between the Portland Timbers and the Seattle Sounders. (Hark, is that the Clint Dempsey ($10.0m) bandwagon I hear rattling into MLS Fantasy station? Board it at your own peril.)

In defense of my fantasy IQ - something that does need defending based on my standing in this year's Eighty Six Forever league - I was able to finally beat the curse that Leonardo Fernandes ($5.1m) left me with, subbing him in for Kekuta Manneh ($6.3m) minutes before Philadelphia's kickoff as I frantically checked Twitter for the starting XI. The young midfielder rewarded me with a goal and a full 90-minute performance, signalling perhaps the end of Cristian Maidana ($7.5m) as a starter for the time being. That said, a double-week is fast approaching for the Philadelphia Union, so cut Philly players with caution.

A quick look at the 86F league table shows an invader holding down the top spot: the aptly named (for a Seattle Sounders supporter, at least) Deuces Wild sits atop our humble competition with a 12-point lead on his closest opposition. Notably, our current leader is also third amongst all Seattle supporters and 14th(!) in all of MLS Fantasy. Stiff competition indeed, considering s/he banked a healthy 72 points this round despite a David Horst ($6.0m) red card and a captained Higuain. As healthy as that point total was, it wasn't the best in the round. That honour goes to the team currently in second place, Eyes to the Evans (the ECS are invading! To arms!), coached by Benjamin Smyth: 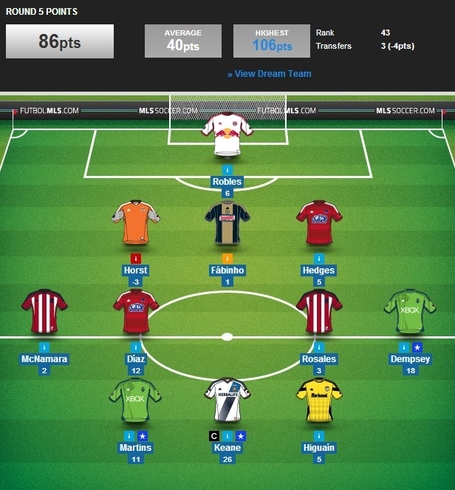 Leave it to die-hard Seattle supporters to have both Obafemi Martins ($9.4m) and Clint Dempsey still on their fantasy rosters. Despite recent form suggesting such a tactic would be less than optimal, it paid off huge for Benjamin as it countered weak showings from Horst and the Chivas USA contingent - and then some. Add to that a captained Robbie Keane ($10.8m) and another solid weekend from Mauro Diaz ($8.2m) for a hefty 86-point haul. I typically don't compliment the enemy, but Benjamin has earned himself a "well done". Well done.

All right, onto the important stuff. Here's the schedule for the coming week: 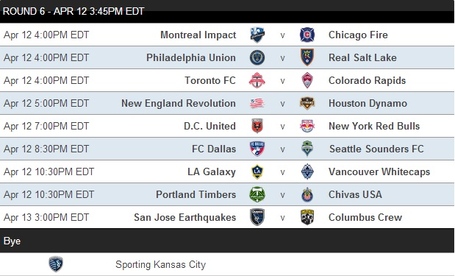 As always, feel free to share your tips and tricks, brag about your signings and/or sling mud at the 86F editorial staff based on their current positions in the comments section below. See you next week!