In which we learned that regression to the mean can be very mean and my needlessly elaborate planning was for naught.

Share All sharing options for: MLS Fantasy Roundup 2014 - Round 8

The problem with having an excellent @MLSFantasy week is the pressure to follow it up the following week. Need another 80+... gulp.

Spoiler: I did not get anywhere close to an 80-point round, thanks to betting on the wrong double-game week (DGW) horse. No, it was not the New York Red Bulls who laid a stinker - it was the Houston Dynamo, on whom I penned all of my hopes with a view to riding an orange crush through the next few DGWs. NYRB romped out to a 4-0 win in the midweek match, injuring my fantasy captain, Ricardo Clark ($7.3m) in the process and scuttling the points totals of Corey Ashe ($7.2m) and Tally Hall ($6.1m). On the flip side, if you were one of the lucky folks who predicted Bradley Wright-Phillips ($7.5m) would have a phenomenal four-goal haul, you earned yourself 23(?!) points and the right to point and laugh at all your peers. Heck, even Thierry Henry ($11.1m) produced worth his value with a mighty 19 points. Will this continue? Not likely, though Wright-Phillips is certainly worth holding onto for the foreseeable future as his price-to-production value is very solid.

Speaking of solid production, Clint Dempsey ($10.7m) and Obafemi Martins ($9.6m) continue to make a mockery of statistical regression to mean. Martins' last four round scores are 11, 3, 7 and 8; Dempsey's are an absurd 18, 14, 8 and 12. Look, I know Dempsey's scores are jaw-droppingly good but he will go cold - or at least cold by his current standards. Heck, if I, noted fantasy expert*, can regress to the mean, so will Deuce. It might not be until after the World Cup but it'll happen. (I may or may not be saying that to myself over and over as my post-wildcard squad falls to pieces.)
(* Note: not an expert.)

The Eighty Six Forever league saw some more shuffling in the lower ranks, which meant very little to the one-two punch of Eyes to the Evans and Deuces Wild. The Sounders-themed (boo) teams are still relatively safe atop the heap, through Richard Matthew's DamagedGoods is only 11 points off the top two. Still, Mr. Matthews is an FC Dallas supporter according to his team page, so nuts to him. As for our featured team from the round, it was a massive triple-digit score - one of eight in the league - for Rob Ladi and TFC Maple Grove: 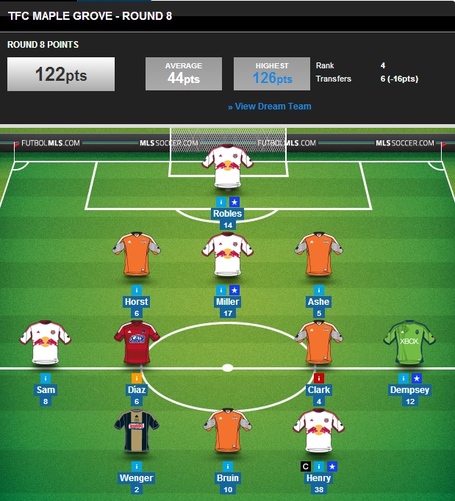 Pro tip: captaining someone who gets 19 points will usually mean good things for you. That said, Rob did well to hedge his clean sheet bets by playing two DGW players each along the backline (3 defenders, 1 goalkeeper). Sure enough, Luis Robles ($6.0m) and Roy Miller ($6.7m) paid off big time, adding to formidable hauls from Dempsey and Will Bruin ($8.4m). Yes, that's right; Bruin finally bagged a goal. You'll forgive me if I don't start throwing parades. Anyhoo, congrats to Rob on his fourth-best(!) score in all of MLS Fantasy! Enjoy regressing to the mean next week.

Round 9 has no DGWs, so no easy recommendations to make this week other than "avoid Montreal" owing to their bye week. Here's the schedule: 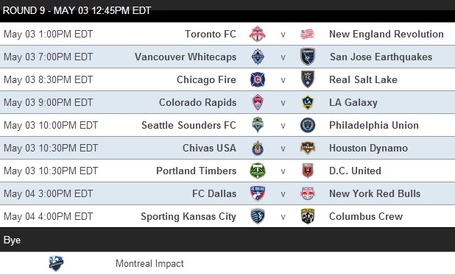 As always, feel free to share your thoughts, musing, opinions and smack-downs in the comments section below. See you next week!