In which we learned that double weeks are good, Aurélien Collin is better and barbecued pork chops are the best.

Share All sharing options for: MLS Fantasy Roundup 2014 - Round 7

There's no real relevance behind me mentioning my flame-grilled dinner last night - I just like a good grilling. Oh, barbecue, how did I live before you? You make long weekends so much better...

Aaaanyhoo, long weekend or no, it was a great week for everyone who invested in the Philadelphia Union to capitalize on their double-game week (DGW). The 2-1 loss to the New York Red Bulls wasn't too terrible and was easily balanced out by the clean sheet against the Houston Dynamo. Suddenly, my cautious decision to captain Zac MacMath ($5.5m) looks pretty darn solid as the goalkeeper's 12-point haul became 24 with the captain's armband, propelling me to a very impressive 81 points overall on the week.

There were, however, 356 people with better totals than me in Round 7 and for many of them, including this week's best score of the round feature - more on him later - those points totals can be chalked up to some impressive outings from the backline. Sporting Kansas City's Aurelien Collin ($9.9m) had a game that went a long way towards justifying his high price tag, notching a goal to go with SKC's clean sheet for a grand total of 14 points. FC Dallas' Matt Hedges ($8.6m) was another standout defender, contributing a goal and an assist in Dallas' 2-1 win over Toronto FC and contributing 13 points to fantasy owners.

While nobody in the Eighty Six Forever league was able to break the lofty 100-point mark, this week's best score was mighty close. Victorian Lambs, coached by my good friend Greg (which means I'm never going to hear the end of this) finished the round with a whopping 97 points. Here's how he did it: 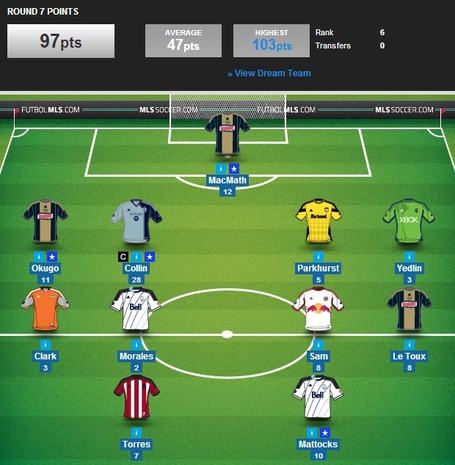 Amazingly, Greg didn't need to captain any of his DGW players to achieve his massive points total, though certainly any of MacMath, Amobi Okugo ($9.1m) or Sebastien Le Toux ($8.7m) would have made fine choices before the results were known. Thankfully, SKC's thrashing of the Montreal Impact made it a relatively moot point. Add on another week of solid performances from Erick Torres ($8.7m) and Lloyd Sam ($7.0m), not to mention the goal and assist from Darren Mattocks ($7.6m), and you have a recipe for a chart-climbing score. Not shown in that picture is Greg's bench, where Corey Ashe ($7.2m) and Harrison Shipp ($6.0m), had they played, would've pushed him easily into 100-point territory.

One other big note from this past round: I used my wildcard. 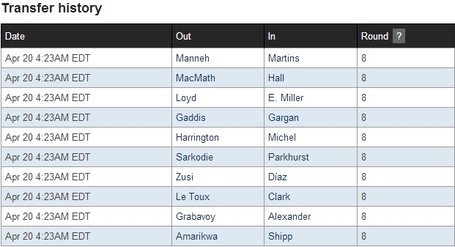 I sold off three of my four Union players while they had value, flipping them for pieces that I can use in this round and beyond. With these moves, I'm prepared for the DGWs in Rounds 8 and 10 while making a small profit on my earlier moves, which I consider a pretty solid use of a wildcard.

As I mentioned, we now head into another DGW round for Round 8, with the Houston Dynamo and New York Red Bulls facing each other before taking on the Portland Timbers at home and the Columbus Crew away, respectively. With the recent news that NYRB midfielder Tim Cahill ($10.8m) will be out for the midweek match and questionable for the weekend, the Red Bulls look less appealing for fantasy owners. That said, New York's loss is Houston's gain, as giving Ricardo Clark ($7.2m) more room to operate in the midfield could give the Dynamo the positive result they need to turn their early struggles around. At the very least, fantasy owners would do well to shy away from New York defenders and goalkeepers while loading up on forward and midfield options like Peggy Luyindula ($6.9m), Lloyd Sam and Eric Alexander ($6.8m). On the other side of the coin, Houston has plenty of options aside from forward (I'm skipping the Will Bruin ($8.4m) bandwagon). Corey Ashe has been solid all season, as has the afore-mentioned Richard Clark. Tally Hall ($6.1m) is the go-to choice for goalkeeper, with two cracks at a clean sheet.

There are other matches to look at outside of the DGW participants, though, and as Mattocks, Collin, Hedges et al proved this past weekend, it would be foolish to ignore them. In particular, the San Jose Earthquakes welcome Chivas USA to Buck Shaw Stadium, which will no doubt give the current fantasy sleeper king Shea Salinas ($7.7m) a chance to ping a few more crosses to his smorgasbord of targets. Here's the rest of the Round 8 schedule: 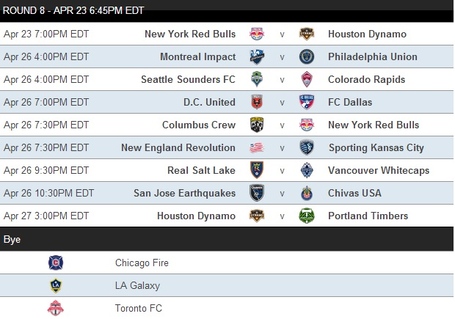 Have your own transfer tips or stories of great conquest to share? Post them in the comments section below and I'll see you next week!