In which we learned that Murphy is still a jerk for his thrice-damned Law and Graham Zusi should never, ever be doubted.

Share All sharing options for: MLS Fantasy Roundup 2014 - Round 4

In 2013, Sporting Kansas City midfielder Graham Zusi ($10.9m) was rightly dubbed "Captain Fantasy" for his impressive points total, making him one of the safest people to captain on any given match day. Despite a slow, CONCACAF Champions League-induced start to the Major League Soccer season - a start that has seen his price inexplicably fall from $11.0m to start the season, making the SKC star something of a bargain right now - Zusi has showed signs of returning to his "Captain Fantasy" form, most notably with his 15(?!)-point performance this past weekend against the Colorado Rapids. If you had him captained, you reaped an impressive windfall.

I, of course, did not. For whatever reason, I thought Lloyd Sam ($6.6m) and the New York Red Bulls were due for a big result and changed my captain from Zusi to Sam. At least Sam didn't goose egg, though his four-point weekend is peanuts next to Zusi. Adding to my misery, I tried to buck the Philadelphia Union midfield debate that has haunted my season thus far and dressed both Cristian Maidana ($7.5m) and Leonardo Fernandes ($5.0m) at the expense of the Chicago Fire's Quincy Amarikwa ($5.8m). As you probably figured out from this article's opening summary, that thrice-damned Murphy's Law kicked in: Amarikwa went a full 90' and scored a goal (7 points) while Maidana and Fernandes scored bupkis (2 points and 1 point, respectively). To quote me upon seeing the news of Amarikwa's goal in my Twitter feed, "Aaaaaaaargh!" Still, my final tally after the Wednesday point adjustments was a decent 51, well above the round average of 39 and good enough to push me in to 30th spot in the Eighty Six Forever league. Take that, Clavin FC!

Speaking of the 86F league, congratulations are in order for Peter Piper (is that his real name?) and his Fresno Squad, who topped the Round 4 leaderboard with a mighty 76 points, a mere 12 points off the round-best 88: 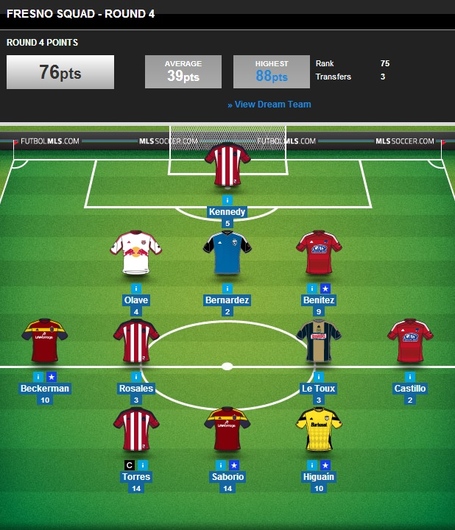 Despite lacking Zusi, Peter more than made up for it with solid performances from Alvaro Saborio ($10.5m), Federico Higuain ($10.6m), Jair Benitez ($6.5m) and Kyle Beckerman ($9.8m). The decision to captain Erick Torres ($8.3m) was not a bad one, considering Cubo notched yet another goal, though I remain steadfast in my assertion that captaining a forward is too high a risk for the reward. Thankfully, this week I have solid evidence to that claim with the likes of Beckerman and Zusi proving their worth as go-to captains.

As I was pulling up the results for this week, I saw some neat little quirks with the current state of the 86F leaderboard that I thought I'd share with you. First up, this pair from the top 30:

You know what they say - the couple that plays together, stays together. Good on you, Christy and Ira Guenther! (And if you turn out to be siblings and not spouses, I deeply apologize for my snap assumption.) Next, we check in on the progress of a prominent Eighty Six Forever commenter and one of the esteemed blog editors: 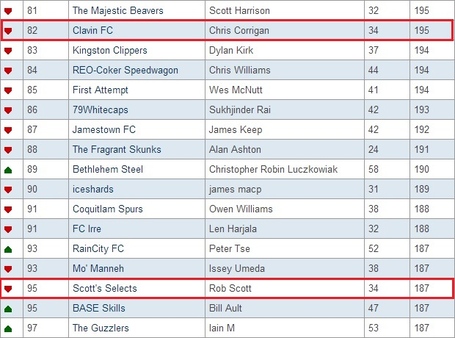 How's the weather down there, lads? Cheer up - at least you're still in the Top 100. Positive thoughts! I'm sure in no time, you'll be dressing the correct goalkeeper, captaining the right player and scoring more than 34 points. (This message brought to you by the Pride Goeth Before A Fall Foundation.) Moving on to some actual positive news from the later pages, one player made a massive splash in a bid to leave the lower places behind:

I don't care what you say - "Tudley Tudlowe and the Muddletoot Society" is perhaps the most delightfully British name in this league. You could trot that name out as a lost Beatles album name and nobody would bat an eyelash. Add in the fact Mr. Tudlowe scored an impressive 68 points thanks to Vicente Sanchez ($7.8m) and a captained Kellyn Acosta ($5.7m) to rocket into 111th place and you have my unofficial MVP of the round. Godspeed, you Muddletoots! Finally, let's check in at the bottom of the league table:

Oh dear. Well, at least they podcast better than they manage fantasy teams. On that inspiring note, here's the schedule for next round: 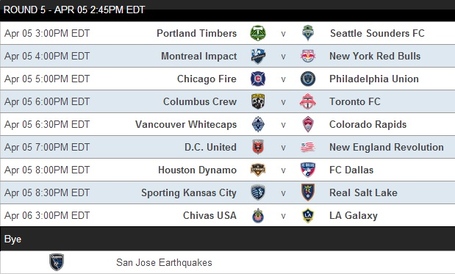 Now, if you'll excuse me, I'm off to ponder whether it's worth a four-point penalty to swap Defoe for Higuain. As always, leave your thoughts, comments, questions, suggestions, taunts and brags in the comments section below. See you next week!