Share All sharing options for: MLS Fantasy Roundup 2014 - Round 6

The last two weeks have been very kind to the Seattle Sounders faithful, especially those who invested in Clint Dempsey ($10.3m) early on. Deuce was something of a risky play to start the season but he's looking dangerously close to proving his doubters wrong after another solid performance against FC Dallas. Now, I realize fantasy sports is all about jumping on trends and capitalizing immediately; that said, is Dempsey really going to keep pouring in buckets of goals match after match? Unlikely. (Note I didn't say "impossible" - just unlikely.) If you're looking to make a quick buck or two off the influx of Dempsey transfers, have at it. If you're looking for a permanent fixture in your starting XI, give it another week. One good match is a coincidence, two good matches is an outlier but three good matches is a trend.

If you're reading this Wednesday morning (and I certainly hope you are), this is your absolute last chance to get in on the Philadelphia Union double-week madness. I'm walking into this week's fixtures with a full complement of four Union players: Zac MacMath ($5.4m), who is also my captain; Sebastien Le Toux ($8.8m); Leonardo Fernandes ($5.4m); and Raymon Gaddis ($7.1m). Philadelphia had a good showing against Real Salt Lake this past weekend and it would be foolish not to expect the Union to put up spirited fights against the struggling New York Red Bulls and Houston Dynamo. If you have the cash to spend, picking up stalwarts like Maurice Edu ($9.2m) or Amobi Okugo ($9.1m) will likely be great help for your team this week. The more budget-conscious manager may be interested in Andrew Wenger ($6.2m) - assuming you don't already have the steal that is Leonardo Fernandes.

Looking past this week, there are more double-weeks on the horizon which present some interesting dilemmas. The afore-mentioned Red Bulls and Dynamo - teams that have not been performing anything like their previous selves - are on tap in Round 8, playing against each other mid-week before taking on the Columbus Crew and Portland Timbers, respectively. Unlike this week, where flooding your team with Union players was near-mandatory, I would use caution with these matches. New York playing away to Columbus does not fill me with confidence, so avoid grabbing anyone from the Red Bull backline. Houston, meanwhile, gets the cozy confines of home against a struggling Portland team. Both teams would love to snap out of their respective funks with a statement win in this match. I can't see it happening, to be honest - Houston has not impressed past the opening of the season and Portland is still trying to sort itself out. An orange-clad midfielder or two is probably your best bet for some fantasy points - think along the lines of Ricardo Clark ($7.1m) or Oscar Boniek Garcia ($9.9m).

Back in the present, it's a rare moment of stability at the top of the Eighty Six Forever leaderboard as last week's round winner, Benjamin Smyth of Eyes of the Evans, made history as the first manager to land the best round score a second time. How did Benjamin land himself atop the leaderboard with a solid 75 points? Here's how: 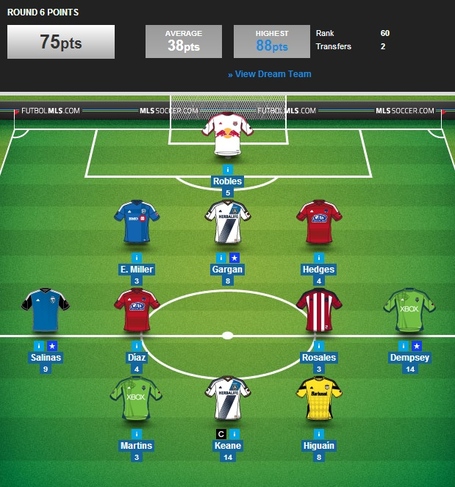 Once again, Dempsey was key to Benjamin's success but so was a captained Robbie Keane ($10.9m). Keane has been one of the more consistent fantasy captain picks over the last two seasons - and when I, a noted averse-from-captaining-a-forward manager praise Keane as a legitimate captain choice, you know that's not faint praise. Big performances also came from Shea Salinas ($7.7m), who has become something of a fantasy dark horse with the San Jose Earthquakes, and from my new favourite budget defender Dan Gargan ($5.5m). A starting defender for under $6 million playing for a solid team? Yes, please.

Here's the schedule for Round 7, which starts now and continues this weekend: 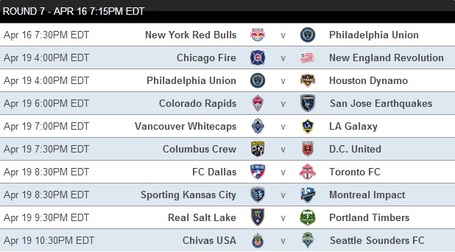 Bad Buys:
As always, feel free to share your thoughts, insights, taunts and brags in the comments section below. See you next week!