In which we learned that Leo Fernandes is haunting my every move and Jermain Defoe looks pretty darn legit.

Share All sharing options for: MLS Fantasy Roundup 2014 - Round 3

(Apologies for the delay in this week's fantasy roundup; there were some scoring changes that I wanted to be absolutely sure were sorted out before posting.)

I'd like to say that I'm some sort of fantasy genius, having snapped up young Philadelphia midfielder Leonardo Fernandes ($4.8m) back during my initial team build. The flattering story says I had a feeling this motivated, fit athlete would find a way to make an impact for his club this season. In truth, Fernandes was a cheap space filler that allowed me to pick higher-salaried options elsewhere; that he has since turned out to be an early fantasy steal just gives me the appearance of intelligence and otherwise competent team selection.

Then again, here I am writing fantasy articles for this and other websites, so, maybe if we all ignore that previous sentence and collectively buy into this whole "I know a thing or two about fantasy" scheme, everyone wins. Sound good? Good!

But seriously, how about this Fernandes kid? While I had the ill fortune to leave him on my bench the last two weeks - weeks in which he posted 8- and 7-point scores, confirming my suspicions that the youngster is cursing me for not putting him in my starting eleven - Fernandes is having the great fortune of being able to repay his coach's confidence in spades. If Fernandes can continue to get spot duty and produce at even two-thirds of his current (admittedly unsustainable) clip, he's a steal at his current price.

Speaking of scoring clips, Jermain Defoe ($10.9m) has acclimatized well to MLS in the early stages. I predicted good things for him in my preview article at WhitecapsFC.com, and he duly delivered against D.C. United. Even more imporantly, Defoe is almost at the $11.0m mark. Those of you who bought the former Tottenham Hotspurs striker early are looking at a nice profit once the time comes to sell. Those of you who haven't bought yet, be careful; Real Salt Lake is no D.C. United, so don't go looking for easy goals from Defoe this week.

In the Eighty Six Forever fantasy league, it was a decent week for Fort Victoria SC. My team pulled in 52 points, despite missing out on all those tasty Fernandes points. I was well off the pace of the Round 3 winner, though, as Akaash Shah's Beginners Luck came away with a hefty 72 points to move into 7th place overall. Here's Akaash's team: 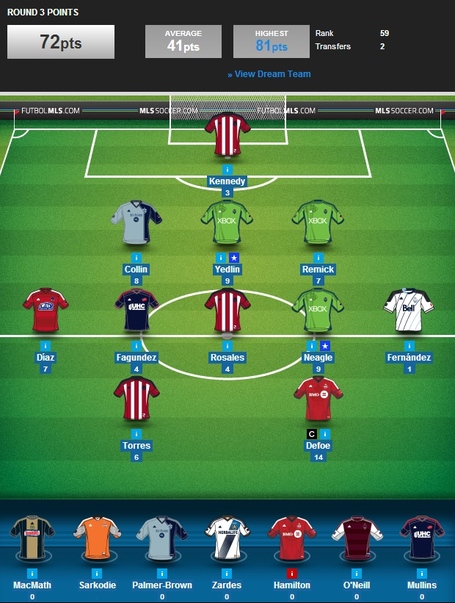 If you can believe it, there was still potential for Akaash to improve on a 72-point haul as Shane O'Neill ($6.5m) was on the bench with 6 points. Still, it's hard to complain with the solid away outing from Seattle, another excellent weekend from Aurélien Collin ($10.0m) and the risky-yet-rewarding (albeit a calculated risk with good odds) decision to captain Defoe. If that really is "beginners luck", I shudder to think what happens when Akaash starts trying.

Here's a look at the week ahead in MLS Fantasy Manager: 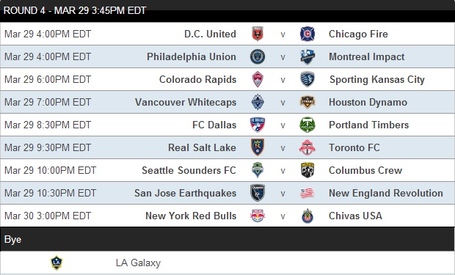 As always, feel free to debate, discuss and brag in the comments section below. See you next week!