In which we learned that starting and/or captaining Mike Magee was not as sure a thing as many thought, while Federico Higuain and Will Bruin were money.

Share All sharing options for: MLS Fantasy Roundup 2014 - Round 1

First off, a rousing thank you to everyone who joined our dedicated MLS Fantasy league in time for round one - all 165(!) of you. There's still time to join in the fun, so be sure to head on over to fantasy.mlssoccer.com and create your team. If you already have a team, click here to automatically join the Eighty Six Forever league. (If the link doesn't work, manually enter code 186-1197.)

If you saw my inaugural "Fantasy Forecast" for WhitecapsFC.com, you also saw the roster I took into the opening match. I have to say, I'm pretty thrilled that I finished the weekend with above-average results. There's nothing more embarrassing than flouting one's alleged knowledge on a subject only to fail miserably. I think we can all agree a 67-point round is far from a miserable failure: 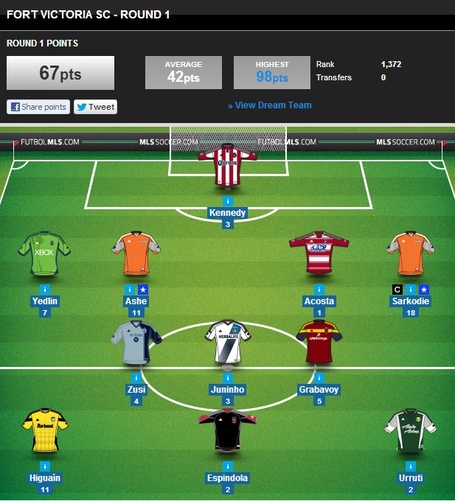 As you can see, I nearly whiffed on my captaincy choice, missing both Federico Higuain and Corey Ashe's 11-point nights. While I stand by my position on the risk-reward of a forward as captain, it's a lucky thing both Houston defenders had good nights - Kofi Sarkodie's 9 points is a fine return for the fullback and I'll take my 18 points with no further complaints.

Elsewhere in the league, our top performer of the round was Sporting Chance coached by one Trevor B. Sporting Chance made their bones on an impressive haul from their forwards, topped off with a captained Higuain: 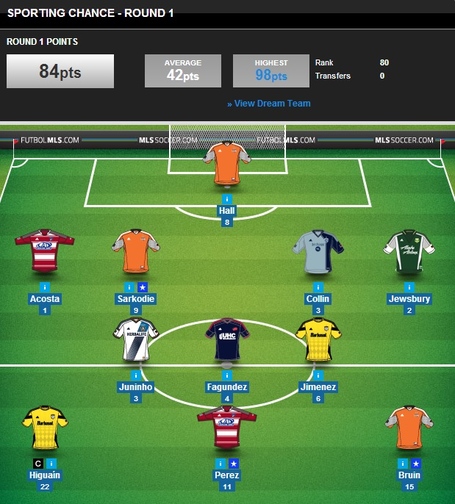 Even Trevor's benched forward, Quincy Amarikwa, managed a goal for his fantasy team, which is either brilliant foresight or incredible luck for the first day of the season. Either way, it's a great start for Sporting Chance with very few transfers needing to be made to account for the Week 2 bye teams (Columbus, DC, LA). On that note, let's look ahead to the next round: 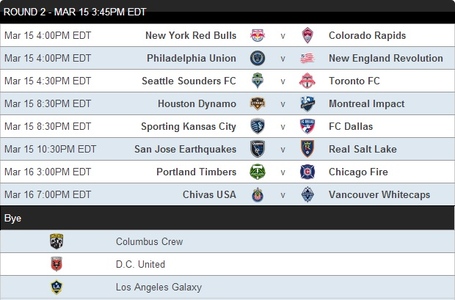 Finally, be vigilant in checking the build-up to each match. Knowing who's likely to start and who's likely to sit will save you the embarrassment of captaining a zero-point player. There are plenty of resources at MLSSoccer.com as well as the pages for each of the 19 teams.

As always, feel free to debate, discuss and brag in the comments section below. Good luck!