In which we learned Sporting KC may be super-snakebit and the TFC-Portland game was all kinds of bad news.

Share All sharing options for: MLS Fantasy Roundup 2014 - Round 29

Even though he plays for the Portland Timbers and is a supporter-taunting bastard, Will Johnson ($9.7m) is still a Canadian and - most importantly - a human being. His injury not even a minute into the weekend match against Toronto FC isn't something I would wish on anyone and I hope he has a speedy, successful recovery. So, yes, on a human level, that game was bad news. On a fantasy level, it was even more bad news as the two highest-scoring Portland players - Johnson and Diego Valeri ($10.4) - are now out for this week's match and, in Johnson's case, beyond. Losing both those players individually is bad enough; the knock-on effect is that Portland is now without the heart and soul of their midfield, meaning fewer attacking chances and less defensive acumen. Portland went from a cautious pick to fantasy kryptonite in 90 minutes at BMO Field; if you have anyone from the Rose City on your fantasy roster, dump them now and don't look back.

Speaking of injuries, spare a thought for Sporting Kansas City who have lost yet another defender in what is turning out to be a nightmare end to the 2014 season. Young centreback Erik Palmer-Brown ($4.2m) is gone for the rest of the season after suffering a stress fracture during training, meaning a cheap fantasy option isn't much of an option anymore. Sure, it's not like you're going to be taken to the cleaners over a sub-$5.0m player if you decide to permanently bench Palmer-Brown, but that's a spot on your roster that could feature a starting player. Regardless, it's been a parade of walking wounded for SKC's defensive corps this season. Palmer-Brown, Ike Opara ($6.7m), Chance Myers ($7.9m) and Aurelien Collin ($9.7m) - basically a Seth Sinovic ($7.7m) away from the starting backline - are all on the shelf; combined with the transfer out of Oriol Rosell, this is team poised to nosedive themselves out of the playoff picture. It's not all doom and gloom for the Sporks, though; reports are suggesting Collin might be back before the season is out. That's good for fantasy managers though it's questionable if that alone can keep SKC in the playoff picture.

Hey, how about those kids out in New England? The Revolution are still looking deadly - Lee Nguyen is still absurdly cheap at $8.8m - and Jermaine Jones ($8.2m) bagged his first goal since his Major League Soccer return. The temptation here is to grab the hot commodities: Nguyen, Andrew Farrell ($7.9m) and Diego Fagundez ($7.3m). While that's all well and good (especially with Nguyen), Bobby Shuttleworth ($4.5m) is at 130 points (7th among GKs). That's fantastic when you consider he's the second-cheapest goalkeeper to break the 100-point barrier, behind only Dan Kennedy ($4.3m) who is not exactly on a team worth investing in. Another deal? A.J. Soares ($7.9m) is the third-best fantasy scorer for the Revs with 116 points and he's only owned by 1.4% of all managers. Does that make him a better buy than Farrell, who is only four points back and $0.8m cheaper? If you're looking to pull ahead of teams in your fantasy leagues, yes. Don't let the fact Soares' price has dropped $0.6m from opening day deter you - the time to bank cash is over. The time to bank points is now.

Speaking of banking points, the best score in the Eighty Six Forever league this round did it with style, running up the second-best score in the entire game. Conare of DC's No Pink Cows and their 150 points were secondly only to Thomas Johnson's Sasha Juniors with 153. How does one get such a phenomenal score? This is how: 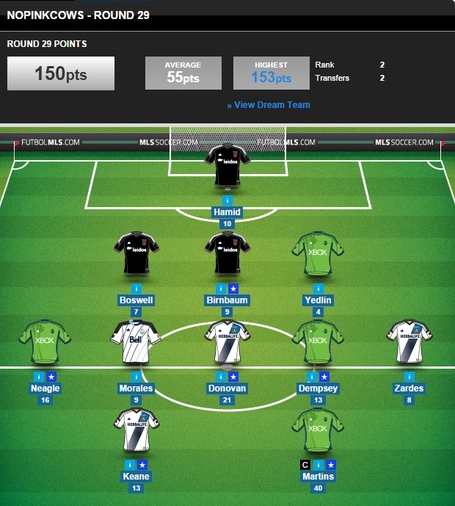 Round 30 has only one double-game team - the Chicago Fire. Everyone else gets a single dance partner, and the dance card looks a little something like this: 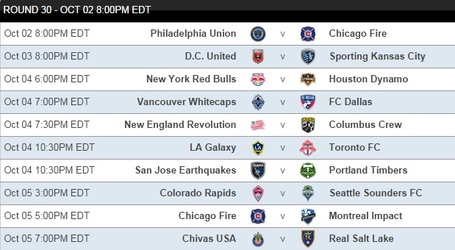 How did you do on the business end of MLS Fantasy Manager this year? Were you like Conare, racking up tens of millions of dollars in profit, or were you more like me getting stuck with poorly timed transfers? Let me know in the comments section below and I'll see you next week!