How Many Wins Will It Take to Make the Playoffs?

With only six games left in the season, 86 Forever examines the combinations of results and points that the Whitecaps will need to reach the MLS Playoffs for a second year running.

Share All sharing options for: How Many Wins Will It Take to Make the Playoffs?

On the last day of the 2012 season after losing at home to the Portland Timbers the Whitecaps got a little help to squeak into the MLS playoffs for the first time in their short MLS history. Last season the Western Conference race was nowhere near as tight and competitive as it is this year, and 43 points was enough for Vancouver to make the playoffs in only their second year in MLS.

The bar has been raised in the Western Conference this year with 50 points being the magic number touted by many that the Whitecaps will have to earn to be able to make the playoffs for a second season running. The team is currently sitting in 7th position on 38 points and with six games remaining, there are still plenty of points up for grabs.

With this thought in mind the 86 Forever team took a look at the result/point combinations for the remaining games that could well send the Caps into the postseason. Without trying to forecast the specific result of any particular game we have compiled the following combinations of wins, losses and draws and their associated total points: 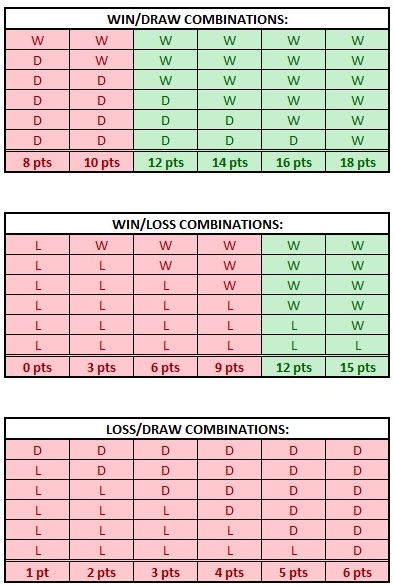 While there are still a possible 18 points remaining for the Whitecaps to claim from their remaining matches the margin of error is small. The Whitecaps are by no means mathematically eliminated from the playoffs, but only six of 18, or just 33% of the above scenarios are favorable.

Whitecaps Manager Martin Rennie has stood by his team during their slump in recent weeks and maintains that they still control their playoff destiny. While this statement is still statistically true time is starting to run out and they will need to reverse their slide in a hurry.

With the remaining matches split evenly between home and away the Whitecaps will have to try to win points at every opportunity. The Whitecaps' schedule to close out the season is as follows:

To get the 12 points the Caps will have to take them away from teams that all currently sit higher up the table than they are. Montreal currently sit in 2nd spot in the Eastern Conference with 45 points (and have two games in hand on the New York Red Bulls). Seattle, Salt Lake, Colorado and Portland currently occupy positions 1, 2, 3 & 5 in the Western Conference. Combine that with the Caps' recent poor form, their habitual inability to win in September and on the road (now winless in 22 of 24 MLS road games) and with two big Cascadia matches looming at the beginning of October the odds are certainly stacked against them.

So now it's your turn. I invite you, our loyal readers, to weigh in on this discussion and let us know whether you think the Whitecaps will be able to pull it off.