In one of the 'cheekiest' stories we've ever seen, a fan had to get a pretty unfortunate tattoo because of Kenny Miller.

For one soccer fan, that is most certainly not the case.

Yes, Scotland fan Ryan Pearson was so sure that Kenny Miller would not score versus England, that he made a very brash promise. Now, he has this tattoo forever on his ass.

*WARNING, THERE BE BARE BUMS PAST THESE WATERS" 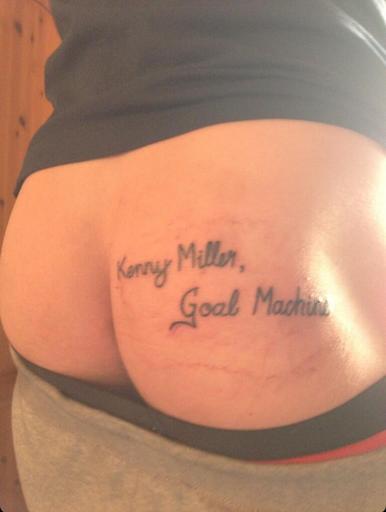 In case you were wondering, that is a tattoo that says, "Kenny Miller, Goal Machine."

Pearson made the mistake of tweeting his bet, which quickly began trending during the friendly match. When Miller scored, Pearson's fate was sealed.

First of all, if you've ever wanted to freak out your co-workers, posting photos like this one is sure to do it. Secondly, this guy deserves a round of applause for going through on a very unfortunate situation, and forever immortalizing a great Whitecap player. (Technically, he's a Scotland fan, but we take what we can here in Vancouver). Lastly, this is why if you're going to bet, make sure you do it with money. The pain of losing five bucks is nothing compared to the agony of having a tattoo pen drag across your ass cheeks for an entire session.

Still though, we here at Eighty Six Forever salute you, Mr. Pearson. It may have hurt, but you turned the other cheek for a good cause.

The full story is here.