This Just In: Week 24 Edition

Share All sharing options for: This Just In: Week 24 Edition

To say the return of US men's national team forward Clint Dempsey to Major League Soccer has dominated media coverage of the league would be putting things mildly. Dempsey's transfer from perennial also-ran Tottenham Hotspur (you'll get there some day, lads!) to the Seattle Sounders was a media circus the likes of which the American sports scene has not been subjected to since the NBA's LeBron James famously held a ninety-minute press conference to decide what fast food chain to visit for dinner. (The twist, of course, was that LeBron eventually chose a nice Italian diner in Des Moines.)

Nowhere was it more apparent that the Dempsey transfer was a media circus of the three-ring variety than right here at SB Nation, where every soccer blog was, shall we say, "treated" to a full-blown ad campaign by MLS welcoming the American star to his new home with the Seattle Sounders: 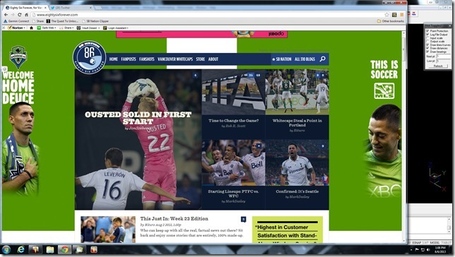 As you can imagine, this did not exactly play well with fan sites of teams not partial to puke rave green, most notably Seattle's Cascadian rivals the Portland Timbers and Vancouver Whitecaps. As countless litres of digital ink was spilled across innumerable blog posts, tweets, Tumblr updates and Facebook statuses, calling for everything from a unified anti-Dempsey chant across both teams' supporters groups to a 100km-long tifo stretching down the I-5, the final word was had - as it often isn't in cases like these - by MLS commissioner Don Garber. On his own Twitter feed, Garber responded:

The Timbers Army and Southsiders have yet to respond, possibly because their heads have collectively exploded.

It's been one of the persistent stories of the 2013 Whitecaps: the backline is in a catastrophic state. Having lost Brad Rusin during the war with Portland last week and with no clear return timetable for Jay DeMerit and Andy O'Brien, the 'Caps are down to young centre-backs Johnny Leverón and Carlyle Mitchell to hold their defense together. Things aren't looking much better out wide, either, with only Greg Klazura on roster as a replacement for either Young-Pyo Lee or Jordan Harvey (notwithstanding Nigel Reo-Coker's ability to slide out of midfield to right-back if needs be).

With no other game-ready support to turn to ahead of this weekend's tilt with the San Jose Earthquakes, Whitecaps President Bob Lenarduzzi made the stunning announcement that, effective immediately, he would be suspending his retirement and returning to the field as a player. "Look, I realize this isn't the most ideal situation," admitted Lenarduzzi to a flabbergasted press corps at BC Place. "That said, I did manage this once before in '87 with the 86ers. Sure, it's been 26 years since I did my last un-retirement, but really, once you've done this before it's nothing."

When asked if as a 58-year-old defender he was setting himself up for further injury at the hands of San Jose's "bash brothers", Steven Lenhart and Alan Gordon, Lenarduzzi laughed off the concerns. "Look, I've been dealing with jackass forwards with ugly hair since well before these two clowns took to the field. Go watch some of that old '79 Soccer Bowl footage. Ugly hair, ugly shorts, ugly plays and I handled it all. Playing against these two San Jose goons will be a cakewalk. Plus, one of them seems to not know the rules of the game or even how shoes work, so I will literally be trying to stop an overgrown child. Not worried."

Your 2017 Whitecaps As Predicted By Football Manager 2013

Finally, a bit of crystal ball-gazing courtesy of tactical soccer game and confirmed narcotic Football Manager 2013. I'm not saying they haven't quite finessed the MLS portion of the game - and certainly this year is better than previous ones - but this is the pre-season line-up for the 2017 MLS season:

Only Camilo Sanvezzo survived the "Great Rennie Purge", as it would come to be called. For those of you curious about the fate of Russell Teibert, he was sold to Portland for $1.2 million and a draft pick. At least Rennie picked up Russell's brother (I assume) Kevin Teibert, so, that's something, right?