Caps Offense Middle of the Pack

Every once in a while, and god knows what possesses me to do so, but I get the urge to dive back into Excel to rediscover just how much I've forgotten how to do. This time around, it's a look at the offensive production of all 19 MLS teams through Week 7.

Share All sharing options for: Caps Offense Middle of the Pack

I've relied on the Major League Soccer website for the data used in the chart below - clicking on it will make it legible. Any mistakes you might find, are most likely to be my errors in transcription.

It should also be noted that five teams (Colorado, Dallas, New York, Salt Lake, and San Jose) have played seven matches, while the rest have played six. The percentage data can be compared across the board, but analysis of attempts and SoGs need to be taken with a small grain of salt.

Naturally, my primary goal with this exercise - beyond fruitlessly trying to figure out how to limit AVG calculations to two decimal places - was to see how the Vancouver Whitecaps stack up. And to lift shamelessly from former 86 Forever master guru Ben Massey, it confirms that we are indeed rather (in)gloriously mid-table, at least offensively. 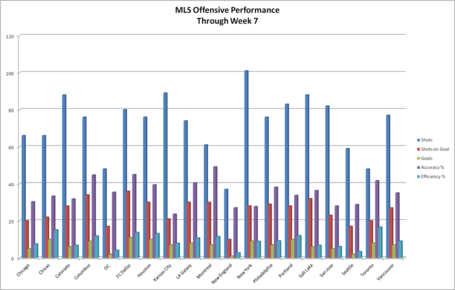 In shots attempted, the Caps come in above average at 77, and 8th overall. But only Kansas City (89) and Portland (83) have more shot attempts over the six matches they've played to date. Dallas and San Jose have played an additional match each, but have racked up only 80 and 82 shots respectively. The league average (rounded) is 69. So, thus far the Caps look to be getting shots away.

Looking at shots falling on target, Vancouver sits 11th with 27 - but again, New York and Colorado (tied for 6th) have the benefit of an additional game, but have managed only 28 shots on net each. Another good sign has 12th place San Jose (extra game) four shots behind the Caps at 23. The league average thus far is 24 shots on goal.

Turning to goals scored, Vancouver finds themselves in a four-way tie for 9th spot, with 7 goals in its six matches so far. Factoring out the teams that have played seven matches, Vancouver is tied for seventh place, along with Kansas City, Philadelphia, and Montreal. Again, Vancouver is a shade ahead of the league average for total goals of 6.5.

Here's where we look at how often shots fall on net. And surprisingly, the Caps are in the thick of things again. Tied for 9th overall at 35%, the Caps are right on the league average. That said, they're a long way back from Montreal's outstanding 49%, and Dallas and Columbus with 45% of their shots hitting the target. The surprise here was Sporting KC, who sit third on points in the Eastern Conference, as they put the ball on net for a league low of 24%.

And how effective are the Whitecaps at putting the ball into the net instead of onto it? Well, again, not too surprisingly, the blue and white are in the fair-to-middling range at 9%, the league-wide average, tied with Philadelphia. Oddly enough, a very sub-stellar Toronto FC top the league at 17%. They're effective when they do get a shot on net...it's just that they don't manage to find themselves in position to do so often enough. The league laggards here are New England and Seattle, with an embarrassing 3%.

The Vancouver Whitecaps are performing acceptably offensively, but aren't lighting anyone's world on fire either. Considering that in their last two matches they've eked out late draws with teams that have losing records, it's a bit of a worry - despite the rosy "lots of positives" talk we keep hearing in post-match interviews. It looks to me that Vancouver is generating more than enough opportunities, but not necessarily getting enough quality chances - or quality finishing - to threaten the top teams. This Saturday, the Caps travel to Dallas, a team with a much higher accuracy and efficiency rating. It's shaping up to be the toughest test the Vancouver Whitecaps have faced all season.