Canada falls five places down to 111th in the world in the latest FIFA rankings - a new all-time worst.

On an evening when 85,000 football-mad fans packed Wembley Stadium to watch England defeat Poland 2-0 and claim their spot at next year's World Cup in Brazil, a sedate crowd of 3,700 fans gathered at Craven Cottage on the bank of the River Thames to watch a "quality" Australian side defeat the Canadian Men's National Team by a score of 3-0.

Yes, this was the same bunch of "quality" Socceroos that was run over by the Brazilians 6-0 just one month ago. And yes, this is the same bunch of "quality" Socceroos that were embarrassed so badly by Les Bleus at the Parc de Princes in Paris just a few days ago that it cost manager Holger Osieck his job. On Monday evening this "quality" side opened the scoring against the Canadians inside the first 30 seconds of play, and Canada was never able to find a way back into this match.

I suppose now that those of you who put up with my mini-rant are going to expect me to segue into a rant about the new manager, Benito Floro, but he's only been in charge for two months, so clearly he's (currently) not the problem. The loss to Australia is the latest in what has been a disgraceful and humiliating 2013 for the Canadian Men's National team. Since the massive 8-1 loss to Honduras just a year ago, the team has not only continued to lose, but has managed to score just a single goal in its last 12 matches (Marcus Haber scored against Japan on March 22nd).

FIFA released their latest rankings this morning and Canada has slipped another five places down to 111 (another all-time worst) out of 207 and are currently nestled snugly amongst a group of nations including Iraq, North Korea and Tajikistan. Here is a sample of the October 2013 FIFA rankings, along with population and GDP data: 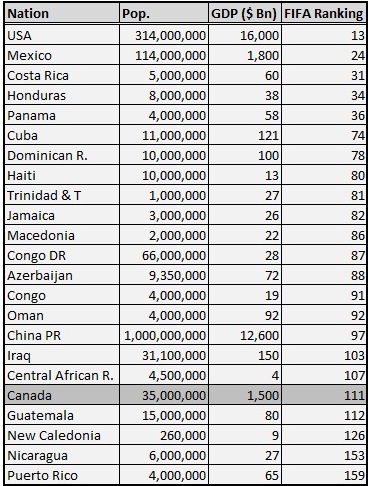 Obviously Benito Floro has gargantuan task ahead of him to make Canada even a semi-competitive side. At this point in time Floro is evaluating the players he has available to him, and it may take some time before we see some positive results on the pitch.

My biggest issue with the national team at the moment isn't the results. They've been nowhere for years and with the Canadian Women's National Team ranked 7th in the world, why should I even bother wasting time cheering for the men's team? My biggest problem right now with the men's team is who they're calling up, when they are being called up, and the timing of these "team camps" .

While the Whitecaps' Russell Teibert is deserving of a place in the national team, his inclusion in the Gold Cup and recent friendlies have often come at an inconvenient time for the Whitecaps. With the Caps' season and playoff hopes hanging by the thinnest of threads, Teibert was once again included in the side that lost to Australia the other night. Teibert did not start the match and was introduced as a substitute to start the second half.

I expect that Teibert will be back in time to take part in the crucial match against the Colorado Rapids on Saturday afternoon. Given the fact that Vancouver's season hinges on the outcome of the two upcoming matches against the Rapids, why was Teibert called up for and played in a meaningless friendly? Surely those who are in charge of selecting the players should be aware of the fact that the club sides for many of these players are at crucial points in their season. I dare say that Seattle's Osvaldo Alonso may be a little peeved that the Timber's Will Johnson wasn't included in the Canadian team for the Australia friendly.

Until the Canadian Men's National team are ever capable of defeating a tiny Caribbean nation with the GDP of a mid-sized company, and a national population the size of Metro Vancouver, it'll be a waste of our top players to interrupt their seasons with their club teams for meaningless matches that will only see Canada plunge further into the abyss. Indeed, one has to wonder how long maintaining a men's national soccer program will be either viable, desirable, or politically expedient.