Share All sharing options for: Sampson to Join Whitecaps? 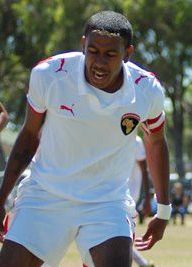 They made some news at the SuperDraft, but the Whitecaps might not be done just yet. According to a couple of sources, the 'Caps have offered 19 year old Center-Back Ethen Sampson a two year deal.

So, what do we know about this kid? We know that he is very young, and that he's been playing down in the Africa Soccer Developments league.

We know that he has trained with the Whitecaps, and that he really enjoyed his time here, saying that he felt like he fit in right away. We also know that the Whitecaps must've been tickled with him, because here they are offering a contract.

We know that the Whitecaps are already carrying five center backs, so it seems a little strange to be adding yet another one to the fold. That means one of two things. 1) Martin Bonjour can pack his bags now, or 2) They have plans to put Sampson out wide, although that seems a little more far fetched.

This is the best article I could find on the deal: http://www.soccerladuma.co.za/news/article/south-africa/sampson-joins-whitecaps-in-mls/129593

It says that Sampson has been receiving interest from pro clubs since he was 17 years old, and that he should be joining the club for pre-season. In fact, it's got direct quotes from the kid saying he's coming, so it looks like this whole thing is legit.

The Whitecaps haven't said one word about this kid, but I'll chalk it up to them being busy with the draft.

I'll be honest, I've never seen this kid play. That being said, he's young, and he's got some hardware on his resume so it's hard not to like the move. He's young, he's got potential, and guys who get paid to sign players have deemed him worthy, so I'll take their word for it.

What do you guys think?