On the Whitecaps' Regression to the Mean

As bad as the Whitecaps have looked recently, it's really just a product of luck catching up with them.

Share All sharing options for: On the Whitecaps' Regression to the Mean

It's nice because I bet this statistic pretty much matches what you saw in the game; the Whitecaps, on balance, outplayed the Rapids. It wasn't comprehensive, but Vancouver played the better soccer and probably deserved the three points. The only person I know who felt differently was Óscar Pareja, in yesterday's post-match press conference, but frankly he's not an impartial witness.

You recall last month I ran a statistical study of the Whitecaps shooting percentages since they sold Davide Chiumiento. The short version is that the Whitecaps weren't as good, early in the season, as we thought they were and now they're getting bad luck to make up for it. As a rule, good teams and bad teams will tend to have the same shooting percentage over time; the difference between the two is that a good team gets more shots and concedes fewer.

This, in turn, means that if your team is either scoring on a disproportionate percentage of their shots or conceding goals disproportionately infrequently, you should expect things to get worse (this is referred to as "regression to the mean"). If this doesn't make sense, don't worry. The Whitecaps' struggles make a perfect illustration. 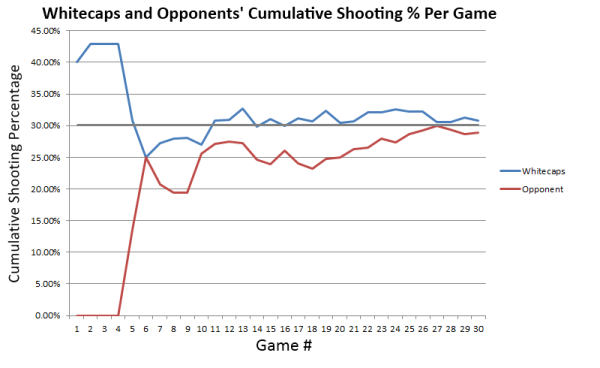 The Whitecaps' shooting percentage has been a little high most of the season, but nothing dramatic (they're very nearly average right now at 30.77%). The main problem is that their opponents are scoring on a larger percentage of their shots; they were scoring only 25% of the time as late as July 14 but have since been steadily trending back towards the league average. You can see the occasional "nick" in the graph where they happened to have a bad shooting day, but the trend is obvious.

This is exactly what we'd expect to see. Teams will have good games and bad games, and sometimes they'll have a lot of one or the other in a row. But in general, they will always be trending towards that grey line. If we played an infinite number of games eventually the cumulative shooting percentage for both the Whitecaps and their opponents would be right along it. The way to ensure a win is to get more shots on goal and allow fewer, not to count on your keeper bailing you out or a Goal of the Week finish on your one chance.

So when I say the Whitecaps were unlucky to score only twice in eight tries yesterday it's because they were. But it's the sort of bad luck that almost balances out scoring twice on two tries May 19 against Seattle.

In his post-game press conference yesterday Martin Rennie spoke of how his team needs to be more aggressive defending the lead late; fight for the ball and go for chances rather than trying to sit back and absorb it. This is perfectly correct. Unless your defense is good enough that it can keep the ball to the outside and prevent shots on goal from even being taken (which Vancouver's certainly is not), better to keep swinging for all 90 minutes.

Remember. Shots are everything. And you can't blame regression to the mean for the Whitecaps only getting one shot on goal in Dallas or none in Seattle or Los Angeles. They sat back and tried to absorb pressure in the way the Whitecaps did early in the season, hoping to get cheap points: the problem is that's statistically unlikely to work. If Rennie is moving away from that approach it'll be incredibly helpful; as we saw last night, the Whitecaps certainly have the players to get offense so long as that's what they're consistently trying to do.