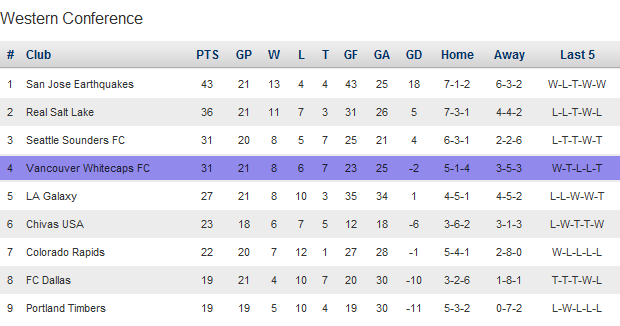 Any discussion of Martin Rennie really should begin with that picture.

The goal differential sort of reeks. The goals for isn't brilliant (but isn't awful either) and the last five games, without knowing what the last five games were, look really disappointing. But the fact remains that the Whitecaps, dead last in the whole of Major League Soccer last year, currently run fourth in the Western Conference. Four points ahead of fifth and eight points clear of missing the playoffs.

I've got my quibbles with Rennie. I disliked yesterday's Eric Hassli trade, as I'm pretty sure I made clear. I also wasn't too keen on the Kenny Miller signing when it was announced. Jacob Lensky seems very likely to sign, and when he does I won't like that either. That's without getting into general quibbles about a near-total makeover of a successful team midway through the season, or Rennie's bench strategy that views many of his interesting young guns as absolute last resorts.

With all my ranting and raving about Rennie in recent weeks, I fear that I (and possibly you) may be losing sight of the big picture. So here it is. Martin's led the Whitecaps to a greatly improved season; this team is certainly better than Tom Soehn's 2011 squad and probably an improvement on Teitur Thordarson's 2010 team in most categories. The Whitecaps are currently securely in a playoff position, extraordinary as that would have sounded twelve months ago. Even at the beginning of this season, with Rennie and so many of our existing signings in the fold, this was the limit of what I dared predict in my most optimistic moments.

I am a Whitecaps fan, sometimes against my better judgment, and when things don't go the way I think they should and there's a bad result I get angry. So let's have that image up there stand as a tribute to Martin Rennie and the fact that, though I retain the right to question his moves, he's certainly earned the benefit of the doubt.