Share All sharing options for: Long Tan Traded to DC For 2015 Third-Round Pick 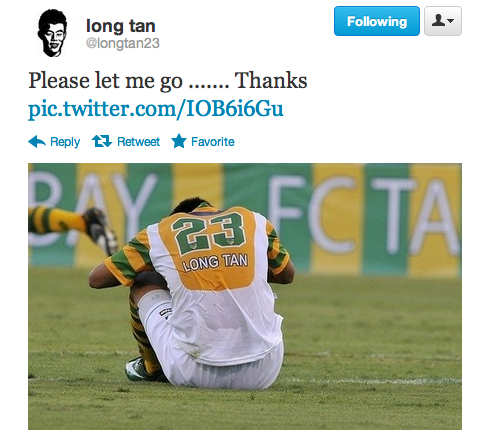 So, farewell then Long Tan. Your wish is granted.

Tan came to the Whitecaps as the "future considerations" in a trade which sent Jonny Steele and Ricardo Sanchez to FC Tampa Bay in 2010. Given that he was the fourth-best forward on a mediocre 2010 Tampa team he brought a decent MLS contribution last year, including a goal, but was never more than an impact substitute. This year on Martin Rennie he was less than that as Rennie shied away from rotating the squad, achieving nothing in the merest handful of minutes.

What does Long bring to a team? When he's engaged and trying his best... which isn't always... he's a dominant force at the USL PDL level, useful in the MLS Reserves, and not totally without value in Major League Soccer. He has a few items in his bag of tricks, although as we've seen professional-quality defenders figure him out in an awful hurry. He shoots hard, although not well, and will pepper fans behind the goal when he's in a shooting mood. He has no particular playmaking or defensive instincts but will tend to give an honest effort in both departments.

He also thinks he's considerably better than he actually is and lets both his actions and his mouth run off more than they should. He can sulk and pout and make practice a worse place with the best of them when he's in a bad mood. I'm not convinced his depth-player skills are worth the superstar baggage and I'm pleased Martin Rennie got an asset, however minor, for somebody who went public earlier this month demanding he be set free.

Goodbye, Long Tan. You and Dwayne De Rosario should be an interesting combination but I wouldn't expect a tonne of playing time there either.