It is every coach and every fan's dream to find an undiscovered player on his way to stardom. Almost any serious soccer message board will have its stories of diamonds in the rough, "why don't we bring in this guy and see what he's got?" Everybody knows that real unexpected talents are one in a million, but nobody cares because the next player might be that one.

Poor Nick Dasovic is no exception.

Dasovic used Twitter in an attempt to reach out to Edmonton-born Arsenal youth prospect Jeffrey Monakana. Monakana is an 18-year-old wide midfielder who played last year's Dallas Cup and who the Arsenal website tells us "was a virtual ever-present for the Under-18s". Monakana has never featured for Canada's youth at any level. 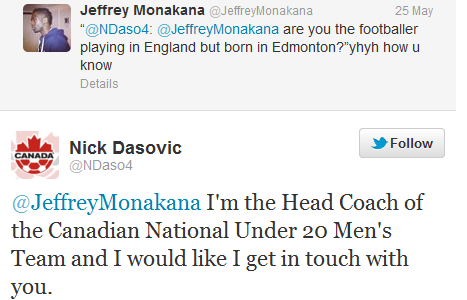 Small wonder Dasovic was excited and tried and draw Monakana's attention. The problem, and the one geographically-inclined readers would have figured out by now, is that Monakana is from that other Edmonton. The one in North London after which Edmonton, Alberta was named. Famous London-Edmontonians include Paul Rodgers, but the former Newport defender and not the guy from Free. It's like they enjoy confusing everybody.

It's easy to see where Dasovic went wrong. He probably got a hot tip from somebody reading up on the Arsenal prospect pool. A player can be born in Canada and move on without leaving a trace in the Albertan soccer community. Dasovic doubtless confirmed the player was from Edmonton without confirming which Edmonton it was and let me promise you, as a native Edmontonian, every single person born in that city has done that at least once.

I'm not trying to make fun of Dasovic for an understandable and ultimately harmless error. He's since been made aware and owned up to it and his intentions were excellent. Finding promising young players with some Canadian connection is a smart play for any Canadian coach and I'm thrilled Dasovic is thinking along those lines. The only problem, if you can call it that, was that Dasovic made his mistake in public on Twitter.

Back in ye olden times Dasovic would have called Arsenal to get in touch with Monakana. He probably would have been corrected before he even reached the player but if he didn't and spoke to Monakana, the two would have put it straight between them in a heartbeat. Nobody outside the immediate conversation would have known and it would have just been a funny pub story for Monakana going forward.

Instead, it's a topic of chatter and chuckles around Canadian soccer. I only found out about this "story" from the thread about it on the Voyageurs message board. A few less charitable posters are calling it "unprofessional" and "embarrassing"; the difference between a minor mistake and a gaffe is that a gaffe is something people find out about.

I've harped a few times on the perils of social media in Canadian soccer. It's a small community and it's easy for the most minor things to be magnified out of proportion, as we see by the reaction this small slip has already produced. There's no conceivable way that this could hurt the Canadian U-20 team on or off the field, but it looks "embarrassing" so there we go. All because one of our coaches was doing his job and trying to bring in an exceptional young player, but was just doing it the wrong way.

To Nick Dasovic and anybody else in Canadian soccer, the lesson isn't "have a perfect understanding of London geography". The lesson is, as ever, "be careful what you make public". A mistake that a thousand people make a thousand times in private is better than a mistake one prominent coach puts out for the world to see. Because there are a lot of people like me who obsess over these details, and the world will see it.