Sebastien Le Toux is returning to Philadelphia? Why isn't somebody writing about that?

There are other storylines (Jordan Harvey is returning to Philadelphia! Undefeated versus winless, but on the winless team's home coast!) but the Le Toux one is most compelling. Even to me, a guy who likes to find whatever the most popular narrative about a game is and shit all over it.

Le Toux was a bit of an icon in Philadelphia for his all-round skills, his endless work rate, and his affable but unflamboyant attitude. His departure for allocation money in an off-season where a bunch of other guys departed for not much shook the Union fanbase to their core, who feared that their good playoff team would return to the doldrums of their expansion era. (With no points and a -4 goal differential through three games, so far they have.)

It's interesting because the Le Toux debacle was the most visible and most inexplicable chapter in the novel we can only call "The Decomposition of Piotr Nowak". Throwing away his good players for peanuts, alienating those he kept, giving increasingly terse and snippy statements to the press as his team bursts into flames even the Chicago Fire would envy... it's fascinating viewing. Unless you're a Philadelphia fan.

Last season for the Vancouver Whitecaps sucked too, but that was just a bad team that failed to get worse. The Union had a good playoff side in 2011 and might well spend 2012 licking the Wooden Spoon, not because their hand was forced but because their coach went bugs-on-the-walls insane. If I were a Philadelphia Union fan I'd have downed an entire can of paint by now.

Say what you will about Tom Soehn but he's obviously from Earth and wants the Whitecaps to win. There was no doubt he did the best he could coaching and is continuing to try and find promising players for Vancouver. Nowak, on the other hand... well, I'm not saying he is match fixing, just that if he was nobody would be surprised.

There's been a lot of hullabaloo about the Whitecaps' increased depth this year. Well, in our fourth game of the season, we're going to need it. Eric Hassli and Alain Rochat are certainly out with lower body injuries. Camilo is uncertain with an ankle problem. Darren Mattocks isn't over his cooking accident and we still have seen neither hide nor hair of Etienne Barbara. Michael Nanchoff and Brian Sylvestre are, as per usual, hurt. Russell Teibert and Bryce Alderson are of course occupied getting Canada's U-23 team into the Olympics in Kansas City today. Gershon Koffie is probably ready to go after missing the last two games but we don't know. John Thorrington and Atiba Harris are enjoying returns to health, and one at least will probably start today. 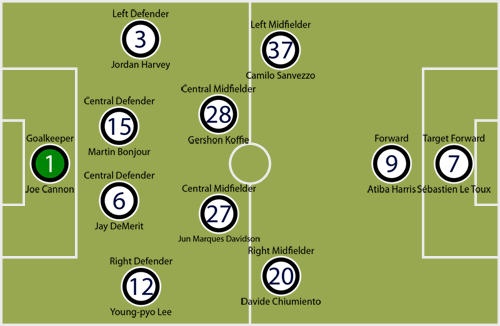 They have three losses in three games but the Philadelphia Union haven't been total doormats. A 3-1 season-opening loss in Portland was nothing to be ashamed of, but a 2-1 loss at home to Colorado the next week sort of was. The Rapids were down to ten men 58 minutes in but still held on; Philadelphia enjoyed a slight majority of the possession and pumped 20 shots towards Matt Pickens but were wasteful on offense and careless on defense. They enjoyed the majority of the possession again in Chicago but generated nothing on offense while the Fire, hardly world-beaters, took advantage of their chances.

Zac MacMath is inexperienced and prone to mistakes but looks like a good 'keeper in the Philadelphia net. Carlos Valdes is a defender of unquestionable quality and Panamanian midfielder Gabriel Gomez is off to a good start in MLS. Danny Mwanga remains an erratic but dangerous X factor, and Michael Farfan is still Michael Farfan. They haven't got nothing.

But... I scroll up to the top of this page and I see, next to the Whitecaps record, "1st West". That's not a phrase I've seen in that place before. Then I look at the other side, at the Union's record. "9th East". Oh my.

The Union defense is just so erratic. Even without Hassli, there are goals there: a lot of stolid, unimaginative, slightly unathletic defenders with Valdes being the only standout that Camilo could pretty much jog through. Le Toux seems like he can keep a level head while the pressure's on; we all recall the heat he took during his scoring drought last year and the workmanlike way he played out of it. I don't rate Harris much, you all know that, but a Le Toux/Camilo/Chiumiento combination alone brings more firepower to bear than Philadelphia might be able to handle.

Vancouver's attack isn't clicking yet, but they've played some reasonably solid teams. Chivas's consistent defending stood out in their 1-0 win over Real Salt Lake last week and is starting to get notice. DC isn't bad, and while the Montreal Impact defense actually does suck, the Whitecaps also did a good attacking job against them.

Predicting a road win is always a dangerous affair. But screw it, why not? Nowak's fucked his karma too badly trading Le Toux to get a win in their reunion.