Two games into the season and the Vancouver Whitecaps are looking good. Yes, I spent all of yesterday pissing in Canada's corn flakes but, even when we consider how lucky we got in Los Angeles, the team is meeting expectations.

Two games in, with chemistry still developing, the Whitecaps have been competitive. If that chemistry does develop then we're looking at a fairly good team even without considering Barry Robson. I'm not putting my rent on an MLS Cup bet yet, but the voice in the back of my head warning "wooden spoon" is starting to go quiet.

DC United has also made some serious changes to their lineup; nothing along the lines of the Whitecaps but significant all the same. They have a new designated player, forward Hamdi Salihi, who replaces Charlie Davies. Five other new signings, plus the inevitable barrage of SuperDraft and Supplementary Draft picks, also arrived during January and February.

The Whitecaps are 2-0 against bad teams and DC United is 0-2 against good ones. This has many DC fans feeling optimistic and Whitecaps fans looking a bit glum. But while the Whitecaps have occasionally looked ugly winning, DC has consistently looked ugly losing. They made the out-of-shape goons on the Los Angeles Galaxy look awfully good last week, also dropping a 1-0 home loss to Sporting Kansas City in week one. Superior opponents to anything the Whitecaps have dealt with, but Sporting Kansas City isn't that good and the Galaxy are still trying to play themselves into shape. DC United has only one goal and has conceded four; that's the kind of ugly statistic which is impossible to sugarcoat.

Give Vancouver home-field advantage on the hallowed turf of Bell Pitch at BC Place and... dare I say it... slight advantage Whitecaps?

If this is the lineup, I have no worries. Cannon made the save of the season after being hurt last Saturday so I'm confident he can hold up, and while I'd rather have Koffie than Matt Watson, Watson continues to just play simple, unambitious, but effective soccer. 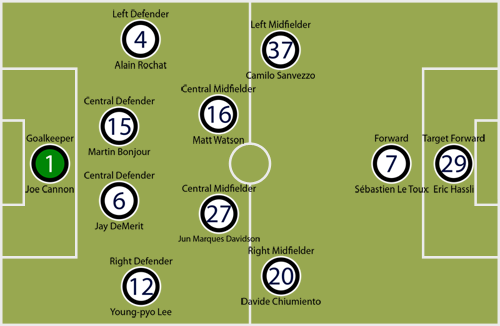 A first look at DC United's lineup says "firepower", which is odd for a team that's scored one goal in two games (and that in garbage time against a Galaxy team which was switching off). In addition to their new DP they have good young attacking midfielders in Andy Najar and Danny Cruz, veteran scoring up top from Josh Wolff and Maicon Santos, one of MLS's better supporting players in Chris Pontius, and of course Dwayne De Rosario, who is the same old MeRo we all know and hate.

What's gone wrong? Have they run into hot goalkeeping? No... ridiculous but true, DC United has two shots on goal this season and one of them went in. There's been a bit of bad luck; their percentage of shots on target is a very mediocre 10.5%. But they also have players like De Rosario who love to hammer twenty shots into orbit for the sake of the one shot that goes in (MeRo alone is responsible for four of DC's 17 misses this year).

They reacted poorly to pressure against Kansas City, where their passing was even less accurate than Vancouver playing in a swimming pool against Chivas. They run a lot of their offense on a very individual basis, and only a few of their players (Pontius is one) excel at the sort of tic-tac-toe team plays which got Vancouver two of their three goals. Cruz, Maicon Santos, and Salihi are all new ingredients to the DC attack; by contract, Sebastien Le Toux is the only major addition to Vancouver's attack.

Now, having hurled all that invective DC's way, they're obviously better than they've looked so far and will be desperate to prove it; 180 minutes of bad play doesn't prove squat. Jay DeMerit and Martin Bonjour have had little to worry about through their first two games, so let's see how they handle De Rosario trying to beat both of them off the dribble and Pontius slyly slipping into the gaps.

Thanks to home-field advantage the Whitecaps enjoy the edge in this game, in my books, but DC can get their goals. Yes, the Whitecaps defense coped easily with Sanna Nyassi and Justin Braun, but their task against DC will be on a different level. For Bonjour, whose mobility was questioned before the season, it'll be his first look at the shifty MLS attackers which have screwed up so many big men before him. Even DeMerit didn't always cope brilliantly in those situations last year.

This game could go any way. The Whitecaps need to retain possession, maintain their defensive shape, and be economical in attack against a defense that should be missing key player Dejan Jakovic. They have to apply pressure, as Kansas City did, and make sure DC's key players never get comfortable. If they pull that off, and walk off Bell Pitch with a comfortable win, then we can start to get excited.