It is at times like this that the Vancouver Whitecaps fan must guard against excessive optimism.

We know that Chivas USA is not very good even with Juan Pablo Angel, who looks set to miss this game. Last year they were a lousy side who celebrated by getting rid of two of their better young players (Justin Braun and Zarek Valentin) and replacing them with Peter Vagenas. They may start an entire forward corps which has never started in MLS before. Okay, they've brought in some interesting South American players; "John Valencia" is goat for "Martin Bonjour", but they look like a bad team determined to remain one.

I don't deny that Chivas sucks and Vancouver ought to be better, but there's a long way between "ought" and "is". Martin Rennie is off to a good start as a manager but he's still trying to corral an entirely new team that, we saw last week, hasn't developed chemistry yet. They beat the Montreal Impact reasonably convincingly, but Montreal is probably even worse than Chivas and we were at home. A team which has always struggled on the road is, even with a new coach, not going to turn that around instantly.

The Whitecaps are off to a good start and are hopefully on their way to a good season. But let's not start partying just yet: this game has "come back to earth" written all over it.

For once the obligatory predicted-starting-eleven might be pretty simple. The whole team played reasonably well last week and nobody stood out as deserving a benching. There were no injuries, and nobody returning from injury who should be knocking someone out of the starting lineup. So my predicted starters for this week are the same guys who started last week. It's bold predictions like that which keep people visiting this site. 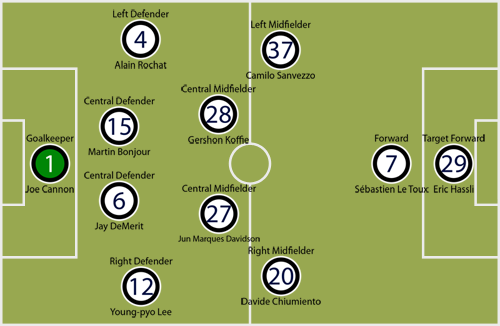 Last year, Chivas USA wasn't as bad as their reputation: they mustered a surprisingly fair goal differential for their standings position. Only twice did they lose by two goals or more and the Galaxy's half-witted cousin was consistently competitive. I think they've taken a step back this year (and I'm not alone) but they're still not to be underestimated.

The Home Depot Center isn't the easiest place to play, notwithstanding the Los Angeles Galaxy crapping all over it the past couple weeks. Chivas had four wins, four draws, and four losses at home with a +5 goal differential. Last week the Goats had Houston Dynamo staring at a draw until Andre Hainault snatched a lucky winner at the death, and Chivas could easily have gotten all three points if the soccer gods had been a little kinder. Today it's pouring rain in Los Angeles and conditions are expected to be bad for offense; one more advantage Chivas's way.

Meanwhile, nobody needs me to tell them how bad the Whitecaps have been on the road. That horse has been whipped to death.

We're told that there's a different attitude in the Whitecaps camp this year. There's more hope, more playing around and having fun but also more hard work. For example, this week's The Two-One had Carl Valentine talking about Eric Hassli developing his headers; reportedly Hassli was apprehensive about using his head because of a childhood skull injury until Rennie got hold of him. It's all good stuff but it's not easy to turn around the psyche of an entire team in so short a time when it comes to actual, competitive matches and not a practice with the coach standing behind you patting your shoulder.

My expectations for this game aren't too high; a 1-1 draw or something along those lines. We're at the point of the season where Vancouver fans are overestimating their own team a bit, high off a fairly good pre-season and beating a team we should never have lost to; meanwhile, we're also underrating Chivas USA as yet another Impact-style speedbump. That's a bad combination and we could be in for a reality check this evening.