Today is not an historic occasion.

Of course, this is the Impact's first game in MLS, but judging by the relatively unremarkable season ticket sales their crowd is less battered-in by hype than Vancouver's was. In any case, Montreal pulled over 10,000 fans a night to watch the Portland Timbers, the Seattle Sounders, and the Whitecaps before; there's nothing new under the sun for Montrealers and especially not when they're playing the Whitecaps again.

Not historic, but exciting? Hell yes. When the Impact and the Whitecaps cross swords you are virtually guaranteed a cracking game. This year's Impact roster looks hapless and overwhelmed, but in last year's Voyageurs Cup Montreal was a miserable non-playoff NASL team which regardless took the exalted MLS Whitecaps through twelve rounds of pain before succumbing in extra time. Montreal and Vancouver have slugged it out through terrific games in the Voyageurs Cup, the second division regular season, and the playoffs, even when it looked like one team ought to be far stronger than the other. That, and the "First Kick bump" which saw Vancouver so handily dominate Toronto last year, means that the Impact may be crap but they could make a tough game.

We also beat Montreal 3-0 in the preseason, starters-on-starters. So I'd be happy to drop the "tough opponent" thing and go for an old-fashioned ass-kicking; me, I'm hoping for five.

When predicting Martin Rennie's first starting lineup in anger, as is tradition in this space, I mostly decided to take Martin's word for it.

That's why Sebastien Le Toux isn't in this starting eleven. It seems like pretty much everybody expects Le Toux to start this week because, well, he's Sebastien Le Toux, but throughout pre-season and even at practice he was hanging out and playing mostly with bench players. Maybe Rennie had Le Toux strengthening the second eleven so it was more competitive, but I suspect there'll be a lot of surprised faces when Darren Mattocks runs out alongside Eric Hassli. Le Toux's lousy game in Carolina can't have helped his stock either. If it were up to me, I'd start Le Toux in the role I assign Mattocks on my lineup below.

The other big question is at right midfield, with Atiba Harris out injured. I have Russell Teibert starting, but the wish may be father of the thought: I was torn between Teibert and Davide Chiumiento, with Michael Nanchoff also a possibility. The reason I picked Teibert is because Rennie's played Teibert more on the right-hand side than he did on the left in pre-season, while when Chiumiento was outside he always played the left (even, and this is important, when Teibert was also on the field). 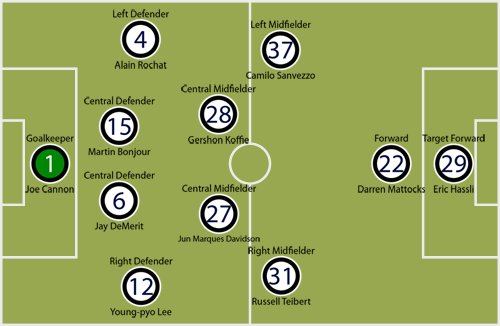 As I've said many times, including my Whitecaps season preview yesterday, I don't rate the Impact one bit. They've loaded up on MLS journeymen and players long past their best-before dates. To try and bolster that lineup, they've signed the likes of Carlos Rivas and Matteo Ferrari: important names but not much more than that, as they're also aging, questionable attitude cases with catastrophic injury histories.

Justin Braun is, in my books, the closest thing Montreal has to a first-class player, although fullback Zarek Valentin and 21-year-old Felipe Martins might get there soon. Davy Arnaud and Sanna Nyassi are decent as well but (stop me if you've heard this one) have questions about injuries. Justin Mapp isn't bad but is painfully one-dimensional. Josh Gardner and Jeb Brovsky are being asked to play outside their best positions, Donovan Ricketts and Patrice Bernier look washed up, and the rest of their lineup is hardly worth notice.

Maybe Jesse Marsch, a stereotypically uninspired ex-player hire who's never before held a head coaching job, can weave these unimpressive elements into a competitive team. But he probably can't.

That team doesn't look too good but they'll be coming out on an emotional high. (One hopes the Whitecaps will also be fired up but these things can be unpredictable.) They have just enough potentially game-breaking attack in Mapp, Braun, and Eduardo Sebrango that they can pull off upsets, like the broken-down heavyweight who still has a knockout punch. We also don't know much about the tactical approach Marsch will take, and while I have no respect for that lineup I respect the dangers of an unpredictable team playing its blood out.

Of course, the Whitecaps have a few knockout punches of their own, and the combination of Hassli, Camilo, Chiumiento, Teibert, and Le Toux leaves the Impact in the shade. If Montreal goes with Tyson Wahl and Ferrari in the middle I think there's good prospects for Hassli: neither can match Hassli's physicality and while Ferrari would be able to neutralize Hassli's ball skills he'd also have his hands full with the attacks of Camilo and company.

As ever, the real battle will go on in midfield. Gershon Koffie and Jun Marques Davidson aren't the best CM combination by any means, but if they're up against Bernier and Martins then that should be advantage Whitecaps. Bernier gets so much love from Canadian soccer fans for his tenacity, his intelligence, and his excellent attitude, and he's given us some marvelous performances in the past... but he's 32 years old and plays older. He's never seemed to fully recover from a ghastly leg injury a couple years ago and, with Lyngby in Denmark last year, had a very mixed season in a league that's far from world-class.

I fully believe the Whitecaps should, and will, win. But I can see how it might not happen, and part of my brain thinks yet another Vancouver - Montreal classic is coming on.