So you've invested some hard-earned cash in a digital SLR, and you want to capture forever some images of little Johnny's soccer season. You show up on game day, shoot like a maniac for an hour, and head home with a few gigs worth of photos -- none of which you're entirely happy with.

I'll say it right up front: It's not easy to get a great photo. And it's exceptionally difficult to get a great sports shot. There's a reason, after all, for cameras that shoot 25 frames per second and more. But, as in sports themselves, speed's not everything -- there's lighting, and composition to think about too.

Luckily, some of these things can be taken care of back at home. But for the amateur photographer, here are a few tips that will make shooting your son or daughter's soccer match more rewarding.

Fearing that I'd maybe bitten off more than I could chew with this piece, I decided to call on Cristina Carvalheiro-Nunes, a multimedia instructor, and professional photographer for Carvsmark Photography. I asked her to get us started by dealing with the most common mistake among the Saturday morning snapshot crowd.

"I think the most common mistake is not trusting your natural eye. We're always told (incorrectly) to center people in photos. But instead of keeping with what you've been told all your life, think about the rule of thirds. If you apply it time after time, you'll retrain your eye to see what it naturally understands as good composition. We're all creative and can sense creativeness. It's the feeling we get when we see a great photo -- that 'Oh wow' reaction. Trust it!"

I'll be assuming here that you are using a digital camera, and armed with a zoom lens -- which, while not absolutely mandatory, is going to give you much more flexibility on match day.

Before showing up and shooting, you need to give things a little thought:

Where are you going to shoot from?

The answer to that question will be determined by a number of factors, some of which you can control, and a host of others that you can't.

First, if at all possible, you want to be standing with the sun at your back. Your subject will be well lit, and you won't be stuck shooting silhouettes with a lot of sun glare. Unfortunately, most youth fields, at least those turf fields laid out in the last 15 years or so, will run east-west, as they run perpendicular to the full-sized adult fields, which run north-south in order to avoid keepers being blinded by the sun. The unhappy consequence of this is that shooting toward the east goal is often going to be difficult in the early morning, when many youth games are scheduled. Later in the day, this becomes less of an issue. Some fields are fenced, and this is also going to limit your ability to shoot. Most of the time, spectator areas are going to be designated, so you're pretty much stuck with what you're given.

If you can shoot from near the perimeter of the field, you might want to consider kneeling or sitting -- and if you're really brave, lying on your stomach for a few very low perspective shots. Just be sure to give enough margin between out-of-bounds, and your pricey new lens. Shooting from a lower perspective will bring out your subjects, and give them more impact. Shooting downward from an adult perspective just makes the kids look that much smaller, and ensures that you get a lot of tops of heads, and not too much in the way of facial expression. If you can, avoid the temptation to park yourself near near a net unless you have a long enough lens to get close ups of the many camera-worthy moments that will be happening around the pitch. You'll need a pretty decent (and pricey) zoom to do it though (250mm will do).

How comfortable are you with your camera?

If you're just after some photos, but not really into apertures, shutter speeds, and always figured that depth of field had something to do with how far down the root structure goes on natural turf, then I'd suggest using one of your camera's automatic modes -- preferably the Sports setting. This will allow you to "freeze" the action enough to get some action shots. You won't have to do much more than track your subject and let the auto-focus lens and the camera's software take care of handling the exposure.

"If you have an SLR or even a point-and-shoot, which is just as great, make sure your settings are for high movement. It automatically springs your camera into high shutter speeds. Now play with this, as if you play with your shutter speed, you can get wonderful effects of blurring around your subject."

If you're an amateur hobbyist...

If you're going to shoot manually, there are a few things you'll want to consider.

Generally, you'll want to shoot as fast as possible, i.e. fast shutter speeds, and as low with the f-stops as you can go. This will accomplish two things that you very often want to achieve when shooting sports: generally, as little unintended motion blur as possible, and (at least with field sports) as little depth of field as you can get away with.

The very nature of action sports is going to limit your ability to frame/compose shots on the fly. As such, you're going to get a lot of clutter in the background. If you've got the money (I sure wish I did) for a fast lens with a long focal length, you're in business. By selecting as wide an aperture (e.g. f2-4.5) as possible, you'll be able to blur the background enough to make your in-focus subject stand out even more. It's at this point that I have to point out the fact that a fast lens is going to cost some serious coin. If you've got notions of snapping up a 100-500mm f2.0 zoom lens, be sure to arrange a meeting with your loans officer first. 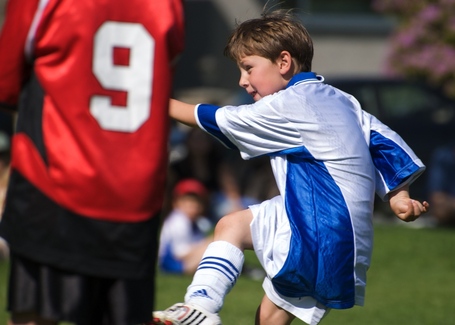 A fast lens blurs the foreground and background, reduc-
ing clutter and attracting the eye to what is in focus.

If you're finding you can't get a fast enough shutter speed to freeze the action sufficiently, check your ISO setting. By setting the ISO higher (thus increasing the camera's sensitivity to light), you should be able to get to higher shutter speeds without underexposing your subject. Naturally, the speed of your lens (max. aperture), and the top shutter speed will determine the limits of your abilities here.

On the topic of exposure, Cristina says that using your light source properly is one of the keys to getting a wonderful photo. "The sun and clouds are your friends," she says. The sun yes, but clouds? She explains that light cloud actually offers the best of conditions, as the diffuse light reduces the extremes of light and dark (shadow) that can make proper exposure difficult.

Sometimes, you'll want to go against the grain of the ideas I've already mentioned. Depending on the shot, a photo taken using a high shutter speed can appear overly static -- there may be no sense of action or movement. By experimenting with your shutter speeds, you may be able to find a setting that gives you an acceptable amount of motion blur (say for the ball in flight, or the churning feet of a player at top speed), but not enough blur to distort the entire photo. 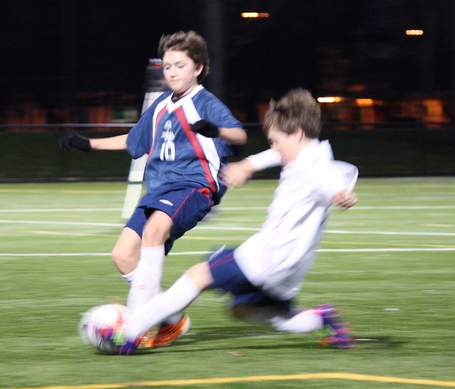 A certain amount of motion blur will convey the sense
of motion and dynamism. The shutter speed here: 1/40.

I often find the shots I like best aren't the ones I'd planned on getting from the action on the pitch. Keep an eye out for other opportunities and interesting perspectives: capturing the expression of joy in a child's eyes, the universal hands-on-head "oh no" moment after an opportunity missed, or a mud-smeared face after a battle in the bog in late November. 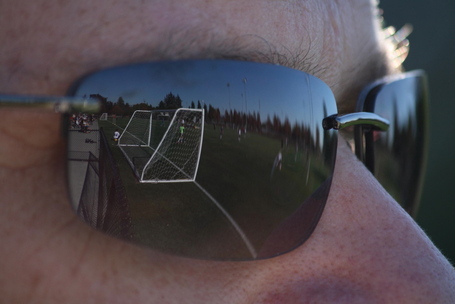 Keep an eye open for interesting new perspectives that
may present themselves while you're shooting. 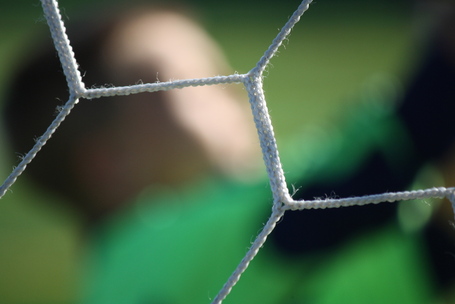 Here, too, we see that the focus of attention does not
always have to be the action on the pitch.

Particularly when you're shooting sports, avoid the temptation to zoom in too close for the shot you want. If you get in too tight, you risk ending up with limbs, heads, or other focal points out of frame. And sadly, no amount of post-processing will get those back for you. So give yourself some extra room -- you can always enlarge the shot later, and crop out what you don't want. The examples below (before and after) are a good illustration of how cropping can improve your end result: 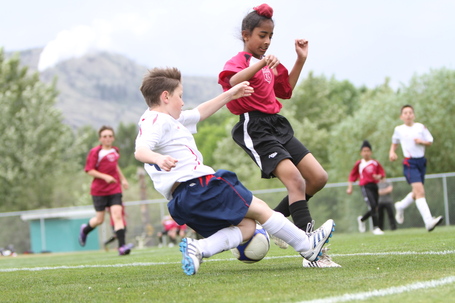 Action shot - uncropped. Visual clutter to the left and
right of the subject are a distraction to the eye. 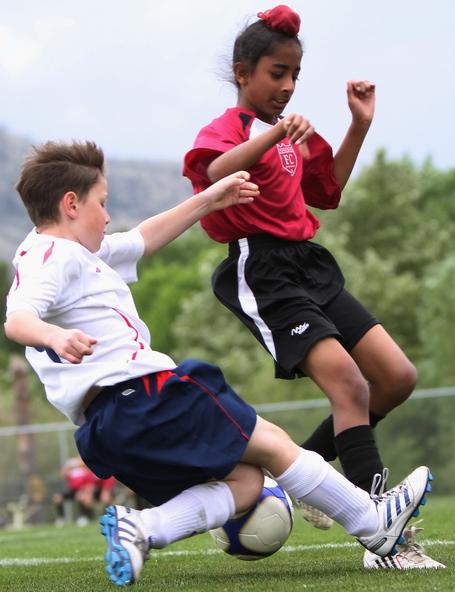 The same photo - after cropping and resizing.

Cristina Carvalheiro-Nunes leaves us with some sage advice and encouragement for the frustrated weekend photographer:

"Take a lot of photos. That's the great thing about digital -- you can just delete what you don't like. Try different angles and settings, and get to know your camera. Don't forget that the camera is just the equipment, and ultimately you're the photographer. Enjoy it, and make mistakes -- you'll be surprised by how beautiful those mistakes turn out!"