Share All sharing options for: The Vancouver Whitecaps Best Eighteen on January 18, 2012 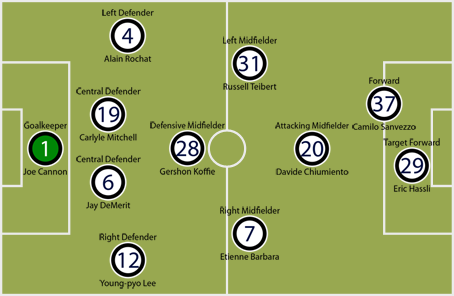 I know I've experienced skepticism about Barbara's value but, actually, if I pencil him into right midfield, this lineup looks a little better. It allows us to put Chiumiento into a devil-may-care offensive role in the middle, which allows us to move Koffie back as a defensive midfield in a 4-4-2 diamond, and all of a sudden this looks like a team which will probably still lose a lot of soccer games, but will lose them really excitingly. Certainly, if Rennie can't get this unit to move the ball then I don't know what the hell we're going to do.