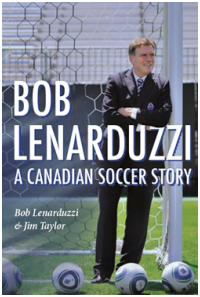 Lenarduzzi is only 56 years old and active in the highest echelons of Canadian soccer. So he is careful not to tell too ribald a tale, not to burn too many bridges, and not to speak too freely. The book, at times, feels like a grab for cash and attention. The first chapter, stargazing at Lenarduzzi's time with the latter-USL and MLS Whitecaps and featuring a thoroughly glowing portrayal of Greg Kerfoot, might as well have ended with a phone number for the Whitecaps ticket office.

But Lenarduzzi's also been around the Canadian soccer world longer than I've been alive and has the stories you'd expect. To those of us who grew up hearing the names of Tomasz Radzinski, Carl Valentine, and others, Lenarduzzi's is the first long-form first-person narrative of those wild days and wilder personalities. Lenarduzzi fights mostly with kids gloves but throws a few hard jabs, and even when he leaves you to read between the lines it's at least entertaining.

This book is light-weight and suffers for it. Its ambitions are few, its production feels rushed, and even the casual fan won't learn a lot. The recollections seem like an excuse to pad Lenarduzzi's treatises on the future of Canadian soccer into book length. With his history Lenarduzzi is just the man to write a fascinating, informative, and entertaining look into the woolly days of western Canadian soccer through the 1970s, '80s, and '90s: what a pity this book doesn't do it.

The book reeks of a rush job. Editing mistakes abound, from calling the Nutrilite Canadian Championship "the Nutrilite Cup" to referring to Houston's MLS team as the "Dynamos". Lenarduzzi and Taylor take pains to explain what NASL and MLS mean, then drop a casual reference to "the MSL" which only a real nerd will realize means the old indoor Major Soccer League rather than a mis-spelled reference to MLS itself. There's even a passage where we're told Canada won the 2002 Gold Cup. The text is padded with excerpts from Taylor's old columns and with plenty of photos; at least the photos are interesting, but even at a modest 224 pages the book feels shorter.

Lenarduzzi has good stories, and that's where the book has some value. Students of the old NASL and CSL won't learn a lot but they'll enjoy vignettes on Lenarduzzi's mingled respect and disdain for old-school German coach Eckhard Krautzun, his relations with famous players such as Alan Ball, and of course the great 1979 Soccer Bowl. Lenarduzzi sees his salad days through rose-coloured glasses; do a shot on every reference to the old Caps' grit and determination and you won't be able to finish the book. But Lenarduzzi does provide honest appraisals of how the 1979 champions were unable to stay together that make interesting reading.

There's more candor during his days as a coach and in management. Even the sainted Domenic Mobilio comes in for (self-consciously apologetic) criticism, while other players from his coaching days are singled out more harshly. It's not all mid-'90s history: Lenarduzzi laments a teenager who played for the Whitecaps in the USL final against Montreal as a hard-nosed midfielder but thought he needed to become more of an offensive threat and dwindled into obscurity. Lenarduzzi and Taylor show caution in not naming the player, then a lack of it in making the player obvious: spoiler alert, it's Ethan Gage, and given that Gage is currently with Lenarduzzi's old club Reading you think he'd be more judicious with phrases like "fell off the face of the earth".

Most of Lenarduzzi's stories lack depth; no third-hand accounts, not much research beyond old scores and archive photos. It reads like Lenarduzzi had a great conversation with Taylor's tape recorder, then the two spent a few weeks transcribing, paring those stories down to inoffensive newspaper-ready nubs. Great tales of epic road trips and legendary locker rooms are brushed over in a matter of sentences. It would have made a fascinating night at the pub but in book form it's shallow.

The only real conflicts surface by trying to read between the lines. For example, Lenarduzzi-as-narrator has a complicated relationship with supporters: he praises the support in Seattle and Vancouver, but lingers on stories of leather-lungs shouting abuse at him, or fans criticizing his aging legs near the twilight of his playing career, or supporters collecting signatures outside Swangard to have him sacked as national team coach. Lenarduzzi's been cheered and had his name chanted as much as any Canadian soccer player alive, but you won't read about it here. Does Lenarduzzi feel hard-done-by by the inherent negativity of the die-hard supporter, has he been ever-so-slightly hurt, or is he just modestly recollecting critical reactions without also pointing out positive ones? The reader draws his own conclusions, as Lenarduzzi and Taylor never get deep enough for such introspection.

These memoirs suffer from being too journalistic. They are presented in short, punchy paragraphs, plenty of pith but no narrative flow. Events feel almost disconnected and oh, the number of times I thought "I sure want to hear more about that." I would dearly like to see Lenarduzzi cut loose for 350 pages with a non-newspaper writer and really stretch his legs; instead, what we get is almost a list of wild things that happened to a legend. This book feels like a teaser, not a finished product.

The later chapters are more focused as Lenarduzzi attacks Canadian soccer. He hits women's soccer, reforming the Canadian Soccer Association, and returning the men to the World Cup with more directness and vigour than in the entire autobiography. The chapters feel like Lenarduzzi's soccer manifesto; slightly too brief, of course, but so much more focused and cogent that it's as if the memoir was an excuse to publish his opinions. None of Lenarduzzi's thoughts will be news to the well-informed casual soccer fan and you may argue with them, but they're still the most valuable part of the book: to a fan who just knows the Whitecaps and them only recently, it will provide a good, readable grounding in some important subjects.

Bob Lenarduzzi: A Canadian Soccer Story is a missed opportunity. What could have been a revealing look back of the wildest, most remarkable years in Canadian soccer history winds up being a rushed, under-written, and under-edited afternoon read. It is fun and occasionally revealing, but inessential, and Canadian soccer must still wait for the eyewitness history we're all craving.