Been a while since I've done one of these, but a worst-vs.-first matchup is always worth a little attention.

Even with David Beckham sitting out, the Los Angeles Galaxy still make a marquee matchup. Landon Donovan, for one, is expected to play for the Galaxy. Juninho, Juan Pablo Angel, Frankie Hejduk, and Omar Gonzales are all well-known players for the Spaceship of the Imagination. Chad Barrett is... I was going to say "well-known" but perhaps I should go with "infamous". Donovan Ricketts, similarly, has a special place in Canadian Soccer Hell all lined up for him, although he's lost his starting spot to drunk driver Josh Saunders.

It's probably unnecessary for me to say this, but the Galaxy are good and the Whitecaps are not. We can't expect a whole lot besides entertainment. The Whitecaps showed some spunk getting a road draw in San Jose and the return of new father Alain Rochat will help, but this isn't a team that should give a Beckham-less Galaxy a run for their money.

This is Major League Soccer and upsets happen all the time, we're told. Funny but the Whitecaps haven't seen too many. Twenty-one games into our inaugural season and the much-vaunted MLS parity has only manifested itself in that we haven't lost any games by three goals yet.

Ah, well. Let's head off to Empire Field and enjoy the show. There's going to be close to a full house, the sun is shining, the pitch is hot, and the Whitecaps are healthier than usual. An upset might come, but even if it doesn't this is a rare glimpse at one of MLS's really, really marquee teams.

I'm trying to avoid sounding like a drooling MLS fanboy when I say this. "Oh, wow, the mighty Galaxy! I wonder if I'll get to smell Bruce Arena's neck!" It's always possible that Los Angeles will come out slow and complacent, that Donovan won't be quite healthy, and that the Whitecaps will be fired up by their home crowd. Mustapha Jarju has to work off a bit of weight but he's been getting better every day. The team's offensive depth is starting to look decent.

Scroll down a bit. This doesn't too bad, does it? The anticipated starting eleven is guesswork and a bit of wishful thinking: I'm penciling Jordan Harvey at left back not because I'm sure he'll start but because I desperately want him to (and to put Jeb Brovsky as far away from a fullback position as possible). It's anybody's guess where Davide Chiumiento will work in: I decided to put him on the bench but he could start at a variety of positions. Eric Hassli isn't 100% and might sit. Then there are the usual injuries, with John Thorrington and Atiba Harris still out (but getting closer) while Russell Teibert deals with a hip flexor problem. Yet the fact that we can juggle Hassli and Chiumiento around and still put out a presentable offensive lineup is a good sign for this team. One of the few. 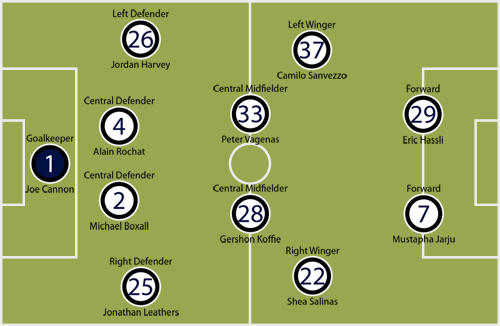 Could be worse, couldn't it? (Could be a whole lot better.)

So why can't this team compete with the Galaxy? The midfield, unfortunately, still needs a lot of work. Peter Vagenas, who's been a favourite of Tom Soehn's since he took over, is not at a stage in his career where he should be starting for any team at this level. I love Gershon Koffie but he's not yet someone who can take a midfield on his back and carry it to the promised land. Meanwhile, both Camilo Sanvezzo and Shea Salinas are offensive savants who play a transition game like twelve-year-olds and are defensively inept. Camilo is willing, anyway, but the ability isn't there: he's a forward playing the wing because Soehn wants goals.

You can usually get away with having one defensive black hole in a midfield. The Whitecaps have two, plus they have the washed-up Vagenas and the unready Koffie. We were expecting a lot from Vancouver's midfield at the start of the season (well, at least I was) and it hasn't delivered. The Galaxy could make real in-roads there.

The defense isn't good enough to make up for it. The release of Mouloud Akloul leaves the Whitecaps' destiny in the hands of Rochat and Michael Boxall. Boxall is big, smart, and talented, but he's also too slow and too inexperienced at this level. Rochat will help him out, of course, but he's out of position and looks better as a left back. Jordan Harvey is fair but not great, as is Jonathan Leathers. And if Jeb Brovsky starts then we'll have a revolving door on one of our wings. It can get unpleasant back there.

The Galaxy are a hell of a team. We're in for a show, I'm sure, but it might not have the result we want at the end of it.

Then again, what have the Whitecaps got to lose? Who's expecting them to win apart from morons? I'd wager that most of the people in the stands will be there simply to see a big team and a heck of a game. So if Vancouver snatches a point (and, with their scoring, it's always possible), it would be a glorious triumph. A loss and it's what was expected. A massive beating and... well, I don't think that's likely.

So I'll walk into Empire with a smile on my face. Why not?