On paper the Canadians shouldn't have had a chance. The Americans had more numbers, more experience, and were led by a hero of the Revolutionary War, General William Hull. The British (as we were then) were a rag-tag bunch of Canadian aboriginals and local militiamen leavened up by a handful of regular soldiers from around the British Empire. They were led by a man, Isaac Brock, who was from some obscure island (Guernsey) and whose previous command experience was limited to some extremely obscure postings.

But the Americans caved. Hull feared a massacre and gave up his garrison and his city without a fight. So the British Empire found itself masters of Detroit; a position they would not relinquish until the end of the War of 1812 when the Treaty of Ghent made all this irrelevant.

Pundits will say that Canada has no chance in this, most recent invasion of Detroit. The Americans have more experience, their fans have more numbers, and the team is led by a hero of the World Cup, Bob Bradley. Canada's a rag-tag bunch of MLS semi-stars and European journeymen leavened up by a handful of truly decent players like Atiba Hutchinson. They are led by a man, Stephen Hart, who is from some obscure island (Trinidad) and whose previous coaching experience was with Halifax King of Donair.

It's not often that history repeats itself in the form of soccer.

Guessing Canada's lineup at the start of any major tournament requires a touch of palmistry. The two certainties are the absence of Dejan Jakovic and Julian de Guzman, both through injury. The lineup we saw starting against Ecuador would seem to be fairly representative but we can take nothing for granted. Simeon Jackson finally started up top in what was either a 4-3-3 or a 4-4-1-1 depending on who you ask, but was relatively muted against the fairly small Ecuadorian centre backs. With Ali Gerba back with the team from the Montreal Impact, Stephen Hart may go back to his traditional big-man-at-the-top philosophy. Indeed, I hope and predict he will, especially since the Gold Cup is a tournament almost made for Ali Gerba. This leaves Jackson moving to right wing where Will Johnson played last week. There have been rumbles that Jackson (as well as Josh Simpson) might be fighting a minor injury; I've wavered on having him or Dwayne De Rosario in the starting lineup about sixteen times.

And who's in goal: Milan Borjan or Lars Hirschfeld? Borjan is almost certainly the superior shot stopper but Hirschfeld has far more experience with these defenders and is the better distributor of the ball; Borjan actually reminds me of a young Lars Hirschfeld. It's not like Hirschfeld's never made a gaffe in his life, though, and in a game like this we might be better off with an erratic goalkeeper who can perform the occasional miracle. That means Borjan. Borjan seems to have Hart's confidence and, while it could go either way, I'm predicting Milan to start in goal. 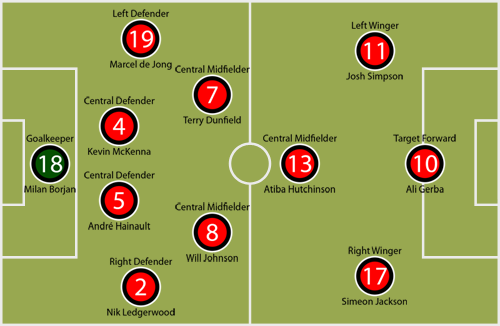 The question then becomes, how is Canada going to perform? You've heard my opinion on the United States already: clearly the second-best team in this tournament but still somewhat overrated and vulnerable to upset. Then again, the betting houses disagree with me: as of this writing Unibet is offering 5:1 on a draw and 10.5:1 on a Canadian victory. It gets worse: Betfair will give you odds of 14.5 to one on a Canada victory and 5.9 to one on a draw. Bet365 isn't even taking new action on the game (but will let you play on Panama - Guadeloupe). The people who put their money where their mouth is are completely writing Canada off, almost to Cuba-against-Mexico proportions.

Obviously, barring match fixing, Canada's being underrated. Yet this suggests that there's a deep-seated skepticism about this team from people who are willing to back up their opinions. Why not? Canada's best players aren't as good as the Americans' best players and our depth isn't as deep. Say what you will about Oguchi Onyewu, but the United States isn't relying on German third-division squad player Nik Ledgerwood as their starting right back. They haven't got Jonathan Bourgault waiting in the wings if anybody gets hurt, or an aging, out-of-match-practice, native left back as their backup centre back in Michael Klukowski.

So let me clear, even as I talk about what a chance the Canadians have: the United States will probably win this game. You can't tell me, though, that this is a sure thing. The surface on Ford Field is already getting horrified reviews: a temporary grass pitch is being laid on top of a rubber backing which in turn is on top of Ford Field's usual artificial surface, and the result is apparently one of the worst playing fields a major international competition has seen since Belize last hosted a World Cup qualifier. That makes the game a little less predictable. I, personally, am of the opinion that even if the United States wins Canada is likely to keep it close. Is the American firepower any better than Ukraine's? Are the Canucks really that badly overmatched?

I'm not giving the Canadians a great chance. When we saw these groups, we knew that this was a game we can afford to lose and we probably will. That doesn't mean a victory is impossible, though, and I'll be watching with the pleasure of somebody whose team has nothing to lose as well as the excitement of a fan whose team has everything to win.