The question on every Vancouver Whitecaps fan's mind heading into this game is simple: what the hell kind of name is "Paolo Junior"?

No, that's not the real question. The real question is what we can expect from this undeniably talented but injury-battered and sometimes inconsistent team. There's no doubting Real Salt Lake's ability. They're fifth in the west but that's because they've played nine games all year: a winning percentage of 55.6% is best in Major League Soccer. They're an inconsistent offensive team but one which spreads their offense around excellently. They're a team with a sometimes-erratic back line and a journeyman goalkeeper which still handles whatever Major League Soccer throws at it. They are, almost by default, considered the most talented team in Major League Soccer, yet for all their consistent results they haven't really been able to run up the score on schmucks like us.

The Whitecaps have questions too, mostly surrounding Tom Soehn. What's he going to do? Eric Hassli is out; suspended because MLS referees are a paranoid lot these days. Will we see Omar Salgado at striker, the classic big target man? Will we see Camilo Sanvezzo because he can actually put goals in the net? Will we see something completely different like a 4-4-2 (which would be hilarious)?

What sort of team will we see come out? If the Whitecaps give away as much of the possession as they did against Chivas USA, they'll have problems: Real Salt Lake is too good not to take advantage. On the other hand, if the Whitecaps keep up the series of useful chances they had in that game and combine it with some build-up they they might snatch a shocking point from a team which is probably penciling in a win.

I don't think there's any real chance that Vancouver will win this game. In fact, I'm expecting a fairly big Salt Lake win. This is early days for the Tom Soehn era, though, and hopefully both team and fans will learn a great deal from this game. There's no shame in losing to a team as good as Salt Lake on the road, and as sick as we all are of moral victories that's the only sort I can see us getting tonight.

If you're going to try and guess the Vancouver Whitecaps starting eleven, you'd better be psychic. Obviously we don't know what Tom Soehn is going to throw at us and he gave us plenty of surprises on Wednesday. I'm crossing my fingers that Camilo Sanvezzo will start at the top in place of the injured Eric Hassli, because the Camilo Show on the left wing was horrifying (had I written an Eighty Six Forever post-game for that match, I probably would have made him Most Disappointing even despite his lovely goal). A combination of Camilo up top and Davide Chiumiento as a withdrawn forward means that nobody's going to head in any crosses, but the dirty secret of Hassli and Omar Salgado is that neither of them can head anyway.

If Camilo is the striker, then presumably Russell Teibert, who looked exceptional in a brief appearance against Chivas, will start at left wing (it might be Michael Nanchoff, but it better not). Alexandre Morfaw was erratic for the first twenty minutes against Chivas but eventually settled down. He looked reasonably good in the last two-thirds of the game and is probably an improvement over Jeb Brovsky, so I expect he'll start alongside the automatic Gershon Koffie. And on defense I predict no changes. The injured Jonathan Leathers sat out practice with a calf problem and that's probably bad news. Bilal Duckett will likely start at right back, and since he sucks that's probably bad news too. 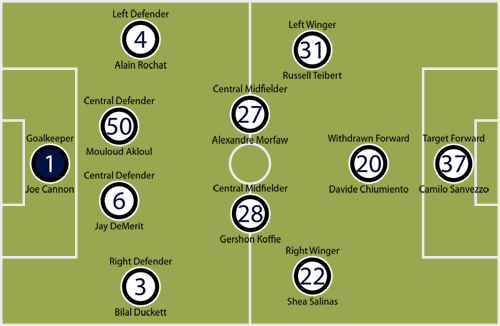 As I said above, I can't picture the Whitecaps getting a result at Rio Tinto. In fact, I'm going to go out on a limb and predict a 3-0 Real Salt Lake victory. Salt Lake is just plain better at every position and as a team. That chemistry which we're seeing the Whitecaps slowly develop is old hat to their players, and while Salt Lake is certainly missing some key pieces none of them is as important to their team as Eric Hassli and Terry Dunfield are to ours.

Rio Tinto is, without question, the most impregnable home ground in Major League Soccer and one of the strongest in the world. Teams who are a step behind athletically will be caught out by the heat, the dry air, the 4,450-foot elevation that's just 700 feet short of Commerce City in Colorado. If you can keep your breath and your wits, then you'll run straight into what has been one of, if not the best team in Major League Soccer in the last three years. To put this in perspective, priot to last Saturday one MLS team had ever beaten Salt Lake at Rio Tinto Stadium: the Kansas City Wizards on May 16, 2009. Real Salt Lake's lifetime MLS regular season record at Rio Tinto is 23 wins, 11 draws, and two losses.

So no, I'm not giving the Whitecaps much of a chance. This is Major League Soccer and, as we are constantly told, anything can happen, but games at Real Salt Lake's home ground seem to be the exception. I can conceive of a draw: if Bilal Duckett doesn't start, the Whitecaps have a pretty useful defensive back six meaning they could snatch a point against the run of play. But I can't even imagine a win beyond the sort of bad luck for Salt Lake which would make Teitur Thordarson wince. Not that the Whitecaps aren't owed some good fortune but, alas, the gambler's fallacy comes into play here: luck has no memory.

What can we look forward to from the Whitecaps if we can't look forward to a point? I'm fascinated to see how this team develops under Soehn. I've been outspoken in criticizing our play against Chivas USA, where we were lucky that Chivas looked so awful. Then again, nobody expected miracles from Tom Soehn and it's not fair to criticize his team for not playing well to his tactics when he had less than three days in charge. With one game a few more practices under his belt, I hope to see a little more cohesion. I hope to see Davide Chiumiento finding his scoring boots. His habit of slamming balls over the crossbar will make him a completely useless #10 if he keeps it up, but Dede scored 17 goals in 88 games with Lucerne so we know he can do it. I hope to see Shea Salinas continue to improve: I love his athleticism, love his mentality, and hate what he does with the ball on his last touch. There's a lot of rust on him from a tough off-season and a Philadelphia Union team which played him in a slightly odd role; it's fair to expect that he'll need some time to get used to the Whitecaps system. But we need to see improvement.

And, of course, I'd be thrilled to bits to see a draw. If the Whitecaps, through some fluke, actually win, then it will almost automatically be the highlight of the season no matter what happens the rest of the year. But I'm going to try and content myself with seeing signs of improvement.